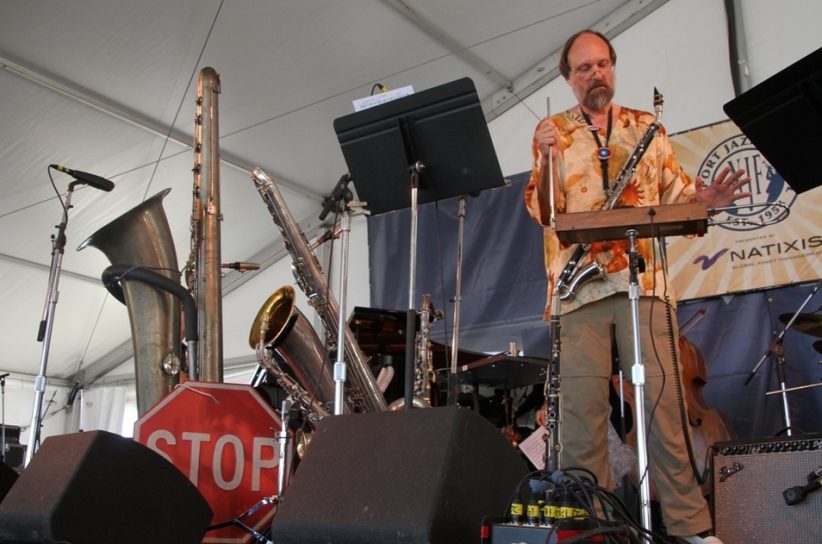 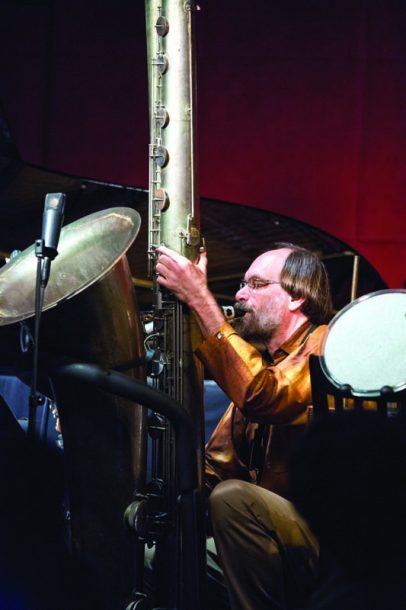 Like any self-respecting mad scientist, Scott Robinson, 56, hides his secret lab away from prying eyes. The headquarters of ScienSonic Laboratories is cleverly disguised as a quaint, well-manicured suburban home in Teaneck, N.J. Look more closely at the heavy wooden doors of the converted two-car garage-guarded by Robinson’s pet rabbit, Tribble, in an attached “rabbitat”-and you’ll notice a small plaque reading “Lab A: Sonic Research.”

Inside is a variety of strange devices and apparatuses that would make any Frankenstein or Moreau proud, albeit with more strings, bells and horns. The Jersey-born, Virginia-raised saxophonist has been toiling in this space since 2007 to create “Worlds of Tomorrow Through Sound.”

The equipment in this laboratory consists of hundreds of unusual instruments collected by Robinson over decades spent scouring flea markets and junk shops. Walking into the cluttered confines of the lab, one can feel like the Incredible Shrinking Man, surrounded by the oversize contrabass saxophone, bass and contrabass banjos and enormous drums. A half-dozen Theremins, including a rare Robert Moog creation, are scattered around the room, while smaller percussion instruments literally hang from the rafters. Two vibraphones, a set of tuned bells, boobams and a bass tarogato are visible. A gleaming spacesuit hangs on one wall, while a recent acquisition, a 12-foot alphorn, sits disassembled in its case.

“This is my world,” Robinson says, entering the room in a gray button-up shirt bedecked with colorful, cartoonish test tubes and beakers. “I’ve spent a lifetime putting together an incredible arsenal of instruments, but it’s not really about the instruments-it’s about the sounds. But in order to reach all these different sounds you have to have the tools to do it.”

The lab only scratches the surface of Robinson’s extensive instrument collection. A narrow path in his basement cuts through stacks of instruments awaiting repair, while the staircase ends at the “Wall of the Ancients,” a lineup of mostly unplayable artifacts that includes a backwards-facing Civil War-era alto horn (“Miles Davis should’ve had one of these,” Robinson jokes) and a bass rothophone.

The collection began innocently enough, he claims. “I started on an instrument which lends itself to playing other instruments. The saxophone is a family of instruments, so if you can play one you can pretty much play another. So it’s an instrument that has a tendency to launch you out into other areas of sound. Most saxophonists will stop at a certain point; I just never stopped.”

When you’re on TV, everybody knows you, or at least thinks they know you. Take Kevin Eubanks, who was on NBC’s Tonight Show five nights … END_OF_DOCUMENT_TOKEN_TO_BE_REPLACED

Jimmy Katz leads many lives. He is the preeminent currently active jazz photographer, and has shot more than 200 magazine covers and over 600 recording … END_OF_DOCUMENT_TOKEN_TO_BE_REPLACED

Take a look at Blue Note Records’ release schedule for 2022 and it’s hard to miss the significant percentage of electronic-oriented music. In March, the … END_OF_DOCUMENT_TOKEN_TO_BE_REPLACED

Those who are only familiar with bassist Martin Wind’s jazz credentials—both as a leader and as a first-call sideman for Bill Mays, Dena DeRose, Ken … END_OF_DOCUMENT_TOKEN_TO_BE_REPLACED