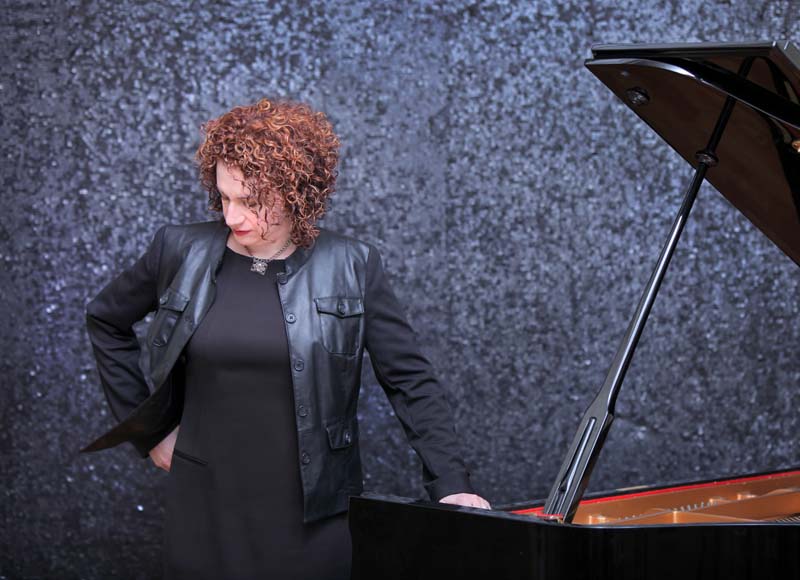 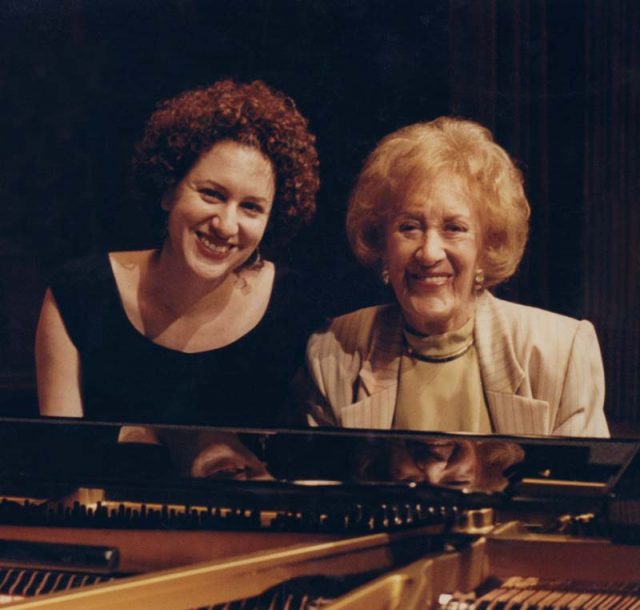 There are plenty of reasons why Roberta Piket decided to record a tribute album to Marian McPartland. One has to do with timing. The English-American pianist, composer and longtime host of NPR’s Piano Jazz died almost a year to the day before Piket performed with a sextet at the Wall Street Jazz Festival, in Kingston, N.Y., in 2014.

There’s also a personal connection. McPartland invited Piket to appear on Piano Jazz for the first time in 1994, before the younger pianist even had a recording to her name, and continued to encourage and support her throughout her career. Then there are the purely musical reasons. McPartland left behind a wealth of compositions, many of them rarely performed or recorded.

On a warm evening in mid-October, Piket joined saxophonist Steve Wilson for a duo gig at Mezzrow, in Greenwich Village, leaning heavily on material from One for Marian: Celebrating Marian McPartland. The performance, attended by McPartland’s granddaughter Donna Gourdol, displayed the versatility of the late pianist’s compositions. Tunes like the lush, flowing “Ambiance” and the tender “In the Days of Our Love” were as expressive and memorable in two-person dialogue as they are in Piket’s sextet arrangements on the album.

“Marian’s compositions lend themselves well to a lot of different treatments,” said Piket, who lives in Teaneck, N.J. “You have to have a strong melody in order to give it another treatment and not have the song lose its essence. That’s what I love about standards. If you listen to a Rodgers and Hammerstein tune, you can do almost anything you want to it and you still have that essence. And that’s how I felt about Marian’s tunes: They’re really well constructed and the melodies are really strong.”

But in listening to Piket describe McPartland, a deeper connection becomes obvious, a truly simpatico rapport that closely links these two women, born half a century and an ocean apart. “When you think about it, it’s pretty remarkable,” Piket mused over coffee before the show. “Marian came of age in the ’40s, yet she never stopped developing and never stopped paying attention to what was going on around her. I think that was a sign of her humility. She was always trying to build other people up.”

Aside from the specifics, much the same could be said of Piket herself. She’s equally disinclined toward self-promotion; it’s telling that she’s dedicated more resources toward publicity on an album paying homage to one of her mentors than she has on her own recent solo efforts, and she seems far more comfortable praising her husband and frequent collaborator, the drummer Billy Mintz, than she does exploring her own history. Her approach to the keyboard is equal parts swinging and coloristic, and she’s worked alongside tradition-minded leaders including Lionel Hampton and Benny Golson, in addition to the more progressive likes of Mintz, Michael Formanek and Jamie Baum. “I’m pretty ecumenical,” Piket admits. “I guess you could say that Marian and I are kindred spirits in that sense: We both don’t want to get closed off into one style of jazz like it’s the only style that counts. Marian was always trying to grow and develop, and that’s very inspiring to me.”

Piket’s wide-ranging tastes come naturally. She was born in Queens, to a mother who had been a professional singer and had stacks of Great American Songbook sheet music in the house. Her father was the Austrian composer Frederick Piket, whose music was performed by the New York Philharmonic, among others. Though she was only 8 when he died, Piket grew up with her father’s collection of records by composers like Ives, Hindemith and Stravinsky, instilling in her a love for complex harmonies. “It’s a weird combination,” Piket says of the musical heritage she received from her parents. “It’s more in my blood than it was in the house, but I think the influence is that I don’t like to get too locked into the stock harmonies. I think it’s important to have that jazz foundation, but I tend to try to push myself a little beyond the expected. And I still love to swing. I think you have to do what’s appropriate for the musical situation. But I think that I can fit into a lot of different environments, because I have those fundamentals and I also have some other stuff that I’ve been attracted to over the years.”

Piket’s father was her first piano teacher, though she went on to study at New England Conservatory with Fred Hersch, Stanley Cowell and Bob Moses. After graduating she came under the tutelage of Richie Beirach, whose famously bristly personality emerged in their first meeting, after he listened to her audition tape. “I remember Richie said, ‘I liked your tape,’ and I was very humble and said, ‘Thank you, Mr. Beirach. I know I have a lot to work on—my melody and my harmony and tunes.’ And he said, ‘And your time.’ That was Richie in a nutshell: He could be very supportive but he always told it like it was.”

In the mid-’90s, Piket was playing in a quintet with musicians who were also members of Lionel Hampton’s big band, leading to her getting a call to sub when that ensemble’s regular pianist missed a gig. She formed a close, nurturing relationship with the aging bandleader, making her recording debut in auspicious circumstances. She plays on a single track on Hampton’s 1995 album, For the Love of Music, but her bandmates on that rendition of “Sweet Lorraine” are Hampton, Wallace Roney, Ron Carter and Roy Haynes.

Around the same time she met Hampton, Piket made her first of three appearances on Piano Jazz. The host heard Piket play during the 1994 BMI/Thelonious Monk Composers Competition, where McPartland was a judge for the concurrent piano competition. “I guess she just liked what she heard,” Piket shrugged. “She was that kind of person, very open-minded and supportive.”

The relationship worked both ways. As Piket prepared to record Unbroken Line, her 1997 debut for the Criss Cross label, McPartland called to ask if she might consider adding one of the elder pianist’s own compositions to the date. Piket was flattered, and had already decided to record McPartland’s “Threnody.” She revisits the piece on One for Marian in a more fully fleshed-out version driven by Wilson’s aggressive, percussive flute and her own urgent solo. (The album’s personnel also includes Mintz, saxophonist Virginia Mayhew, bassist Harvie S and Bill Mobley on trumpet and flugelhorn.)

It was obvious from that call and from statements she made on her show that McPartland felt her repertoire was underappreciated. When the host played her piece “Twilight World” during one of Piket’s Piano Jazz appearances, the protégé remarked that the song—included on One for Marian, with Karrin Allyson singing—was familiar but that she hadn’t been aware it was one of McPartland’s. Despite the fact that no less an eminence than Tony Bennett had recorded it, the composer replied, “I’m glad you’re actually hearing it. My tunes are the world’s most obscure tunes.”

Piket would return to McPartland’s catalog on a few occasions over the ensuing years. Like her mentor, she focused on the piano trio in her earliest recordings, though she’s varied the format more in recent years, since founding her own Thirteenth Note label. The imprint began as just that—a tag to put on the back of CDs that Piket had opted to self-release, beginning with her 2003 album, I’m Back in Therapy and It’s All Your Fault, with the electric group Alternating Current. That was followed by a trio outing with Mintz and bassist Ratzo Harris; Sides, Colors, which features a sextet format similar to One for Marian, along with a string quartet; and a pair of gorgeous solo records.

Since then, Piket has been joined on the roster by Mintz, who returned to New York from the West Coast in 2003, in part due to their blossoming relationship, and made his belated leader debut a decade later. Saxophonist Lena Bloch opted to release her 2014 album Feathery, featuring Mintz, through the label, and Piket hopes to add a few more artists soon. “It’s become like a real label,” she laughed. “If you can do it on your own, in the long run you’re going to be better off.”

McPartland’s early interest and encouragement were crucial to developing the assurance to go it alone, Piket said. “The early ’90s was a time when the prototypical jazz musician was a young man in a zoot suit—no exaggeration. There were certainly role models, but getting into the pack was very challenging. It wasn’t so much that she was a woman, but the fact that Marian took such an interest in me and my career was a big confidence booster.”

When you’re on TV, everybody knows you, or at least thinks they know you. Take Kevin Eubanks, who was on NBC’s Tonight Show five nights … END_OF_DOCUMENT_TOKEN_TO_BE_REPLACED

Jimmy Katz leads many lives. He is the preeminent currently active jazz photographer, and has shot more than 200 magazine covers and over 600 recording … END_OF_DOCUMENT_TOKEN_TO_BE_REPLACED

Take a look at Blue Note Records’ release schedule for 2022 and it’s hard to miss the significant percentage of electronic-oriented music. In March, the … END_OF_DOCUMENT_TOKEN_TO_BE_REPLACED

Those who are only familiar with bassist Martin Wind’s jazz credentials—both as a leader and as a first-call sideman for Bill Mays, Dena DeRose, Ken … END_OF_DOCUMENT_TOKEN_TO_BE_REPLACED