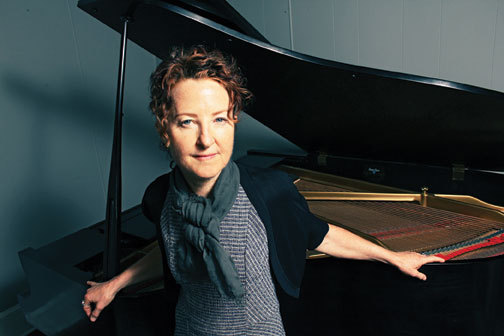 Given pianist-composer Myra Melford’s Chicago origins and her deep ties to many of the seminal artists involved with the AACM, people often assume she came up on the Windy City’s avant-garde music scene. But Melford only discovered her affinity for jazz as an undergraduate at Evergreen State College in Olympia, Wash., and she notes that it was an accident of geography that kindled her ongoing bonds with a coterie of seminal Midwestern musical searchers.

In the late 1970s, the college town provided an amenable stopover between gigs in Portland and Seattle, which gave Melford numerous opportunities to encounter masters such as Muhal Richard Abrams, Oliver Lake, Joseph Jarman, Roscoe Mitchell and, most important, violinist Leroy Jenkins, whose trio gig sparked Melford’s enduring commitment to improvised music. “[The music gave me] an ecstatic feeling. I thought, ‘I’m going to check this out,’ and I never really looked back,” said Melford, 56, before a recent performance at Duende in Oakland. She was there previewing Language of Dreams, a Guggenheim Fellowship-supported multimedia piece that premieres in November at San Francisco’s Yerba Buena Center for the Arts. “I think there must be some sort of affinity, because I’ve been drawn to those musicians though I never knew them in Chicago. I really got to meet Leroy when he came through with Oliver Lake a year later. I said to him, ‘I think I’m really serious,’ and he said, ‘Here’s my phone number. Look me up when you come to New York.'”

Upon graduating from Evergreen she studied with Art Lande and Gary Peacock at Seattle’s Cornish College of the Arts, and did contact Jenkins when she moved to New York City in 1984. After honing a vocabulary of extended piano techniques, she methodically began to develop a highly personal compositional vision informed by Caribbean rhythms, classical Indian traditions, Sufi mysticism, architecture and Henry Threadgill’s cellular approach to building tunes. A polymorphously inventive bandleader with some 20 albums as a leader or coleader, a prodigious inside/outside player with a deep feel for the blues, and a composer of incantatory themes, Melford has inherited the AACM’s improvisational mantle and refashioned it for herself.

Jimmy Katz leads many lives. He is the preeminent currently active jazz photographer, and has shot more than 200 magazine covers and over 600 recording … END_OF_DOCUMENT_TOKEN_TO_BE_REPLACED

Take a look at Blue Note Records’ release schedule for 2022 and it’s hard to miss the significant percentage of electronic-oriented music. In March, the … END_OF_DOCUMENT_TOKEN_TO_BE_REPLACED

Those who are only familiar with bassist Martin Wind’s jazz credentials—both as a leader and as a first-call sideman for Bill Mays, Dena DeRose, Ken … END_OF_DOCUMENT_TOKEN_TO_BE_REPLACED

Have saxophone, will travel. With apologies to Paladin, that sums up the career of reed player Greg Abate. Since the early 1990s, he’s been a … END_OF_DOCUMENT_TOKEN_TO_BE_REPLACED