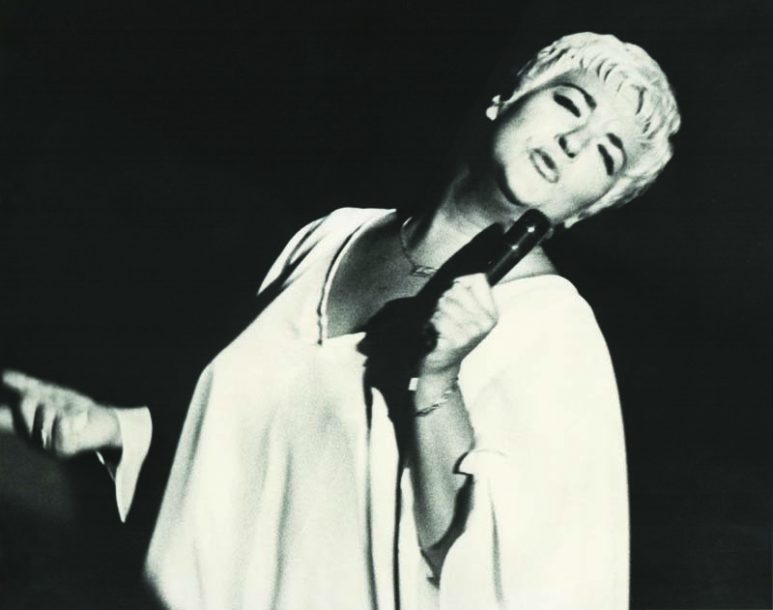 In 1964, an exotic new voice sprang up in vocal jazz-an airy, humming contralto with pianissimo highs, guttural lows, a hushed, prayer-like intensity and a sense of swing that made phrases glide. Morgana King’s breakthrough hit, “A Taste of Honey,” used Shakespearean English to evoke a woman who dies over lost love. Employing operatic flourishes and the melismatic wail of Sephardic music, King reinvented the tune so lavishly that it was almost unrecognizable from what its composer, Bobby Scott, had written.

“I want freedom to fly, freedom to take people on a passage,” she explained recently. “I like to take my babies”-her musicians-“and say, ‘Come with me; we’re gonna go to the Wizard of Oz!'”

At the 1965 Grammys, she vied with the Beatles for Best New Artist. Critics debated whether King’s melting pot of song stylings qualified as jazz, but Duke Ellington and Billie Holiday adored her; so did her pal Frank Sinatra, opera star Eileen Farrell and Stevie Wonder. When Antonio Carlos Jobim was inducted into the Songwriters Hall of Fame in 1991, he chose her to sing his songs at the ceremony. Yet for King, one credit has overwhelmed five acclaimed decades of singing: her brief appearance opposite Marlon Brando as mob wife Mama (Carmela) Corleone in The Godfather.

Now 86, King is one of the last surviving innovators in her field; she’s also known for her disappearing act. She last performed in 2000. Periodically she’s gone into hiding, driven away by a disgust with showbiz and a string of personal tragedies. For all the ethereal lightness of her singing, she has a fiery temper, a raucous sense of humor and a vocabulary that would make a trucker wince. King has fearlessly stepped on toes. Before “A Taste of Honey” she sat out a three-year contract with the mob-connected Roulette Records, when they refused to let her cover the entire first album of João Gilberto, who had given her a copy in Rio.

Having known her in the 1990s, I was determined to find her. A friend of hers dug up an address in Palm Springs, Calif. I showed up unannounced in April, at a plain-looking white house. There, standing before me in a housedress at the screen door was the fabled Godmother of Jazz, looking slimmer and younger than the mamma mia many remember. She welcomed me into the meticulous home, and we talked.

King was born Maria Grazia Messina on June 4, 1930, in Pleasantville, N.Y. When she was 3, her beloved parents, arts-loving Sicilian immigrants, moved their large family to uptown Manhattan. Her father, Ignatius, had a coal-and-ice delivery service and relaxed by playing classical guitar and spinning opera 78s. One day he shouted to his wife, “Isadora, this baby is singing Caruso’s music!”

Ignatius died in a freak accident when Maria was 11, but her musical training had begun. She absorbed everything, including the Arabic songs sung by Isadora, an Orthodox Jew, and the music at a nearby Sephardic synagogue. At 14 she got a classical music scholarship, but jazz won her heart and she hit the clubs. Some musicians brought her into Billie Holiday’s dressing room and had her sing “Body and Soul” a cappella. King remembered Holiday’s response: “You better all take care of this baby, ’cause that’s my child.”

At 16 she went to work at the Greenwich Village Inn, owned by mob boss Frank Costello. Isadora had forbidden her from using the family name, so she whipped up the aristocratic Morgan King. Costello politely asked if he could rename her Morgana. When he learned she was Sicilian, he offered her protection for life.

King was still a teen when she wed trumpeter Tony Fruscella, a master of the lyrical style adopted by Miles Davis and Chet Baker. Fruscella was a junkie, and the marriage crumbled after nine years. But he taught her all about bop, and they hung out with the greats he knew, notably Charlie Parker and Lester Young. Fruscella was no breadwinner, and after the birth of their daughter, Graysan, King sang wherever she could: in gay Village clubs, strip joints, after-hours spots in Harlem. “I took care of my kid when my husband was stoned out of his bird,” she said. “I worked hard, woodshedding, woodshedding.”

All the while, she said, “I was surrounded by gay people. They were my mentors.” One of them gave her a stack of lead sheets he had inherited from the late torch singer Helen Morgan. Out of that came King’s 1955 debut on Mercury, Morgana King Sings the Blues, a Morgan tribute. Her singing in those years was immaculate but straightforward. Cole Porter wrote her a fan letter, but the general public wasn’t listening.

Her second husband, trombone player Willie Dennis, strove to help her stand out. At his urging, King tapped into her early influences; in clubs, she wove them into her style. She loved guitar, and with Jim Hall she developed a steamy take on Jobim’s “Corcovado,” complete with bird sounds. King honed a medley of “When the World Was Young” and “Young and Foolish” that she had devised with Bill Evans, who had accompanied her briefly. Guitarist Gino (Gene) Bertoncini, whom she discovered, helped her create “A Taste of Honey.” But King knew what she wanted. “She had her own intuitive way of singing,” Bertoncini said. “She couldn’t tell you what she was doing, but she knew.”

Morgana King-With a Taste of Honey, released in 1964, succeeded beyond anyone’s dreams. Suddenly King was all over TV. Sinatra, then Tony Bennett, discovered Zito. He and King made a second album, Miss Morgana King. Then came the night of July 8, 1965. Dennis was driving a rented car through a rainy Central Park. The brakes failed, and he crashed fatally into a tree. “I wanted to die,” King admitted.

Sinatra helped restore her will to sing by signing her to his label, Reprise, for three albums. The first, It’s a Quiet Thing, was an aching diary of loss, arranged by Zito. Gradually King bounced back, but disaster struck again, in 1969, when she had a car accident of her own.

After two years of relative silence, King resurfaced dramatically when director Francis Ford Coppola cast her in The Godfather. As Mama Corleone, King sang in Italian but didn’t speak; yet she inhabited the part so convincingly that everyone paid attention. On a comeback LP, New Beginnings…, produced by her manager, Vince Mauro, she joyfully embraced the songs of the day. Thereafter she recorded nine albums, most of them informal small-group jazz, for the Muse label.

But King had a growing priority: to tend to Graysan, who had battled cancer and bipolarity for years, and to help raise Morgan, her grandson. On June 4, 2000, she gave a farewell 70th birthday show at the Cinegrill in Los Angeles. Eight years later, Graysan died-“and a part of me died with her.”

Musically, she knows what she’s contributed. “I think I did a very unique thing,” she said. “Being a great musician meant more to me than anything.” Before leaving, I asked her to sing something, anything. King had put on her 1965 recording of her mother’s favorite song, “Cuore di Mamma” (“A Mother’s Heart”). As the vocal line swooped into the stratosphere, she sang along. She sounded the same. King couldn’t help but recall Graysan’s dying words: “She said, ‘Ma, never stop singing.’ I can’t hurt her and do that. I have to go back to what God gave me.”

Guitarist Will Bernard bears the bittersweet blessing of virtuosic skill and eclectic taste, making his music a perpetual delight and yet hard to categorize. Maybe … END_OF_DOCUMENT_TOKEN_TO_BE_REPLACED

At 95, Chicago-based guitarist George Freeman is among the world’s oldest active jazz musicians. Although he came of musical age in the 1940s and counts … END_OF_DOCUMENT_TOKEN_TO_BE_REPLACED

When you’re on TV, everybody knows you, or at least thinks they know you. Take Kevin Eubanks, who was on NBC’s Tonight Show five nights … END_OF_DOCUMENT_TOKEN_TO_BE_REPLACED