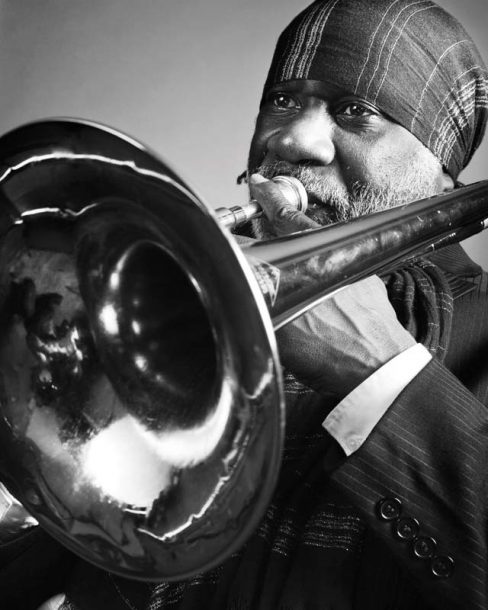 You’ve got a lot of great trombone players playing right now,” says trombonist Kuumba Frank Lacy, a big man perched on a small stool in the back room of Greenwich Village’s Smalls Jazz Club. “It’s really unprecedented in the history of jazz, where you have all these great trombonists-older trombonists, middle-aged trombonists and younger trombonists. It runs the whole gamut, man.”

Lacy, 55, is something of a soft-spoken evangelist for his instrument. He feels that there’s a strong bias against the trombone among the jazz press and fans, especially in the United States. Despite the instrument “lending itself to innovation,” the list of real stars in jazz trombone history, he notes, is a very short one while trumpet and saxophones overflow with famous specialists. “It’s gotten better, with the exposure that the younger guys are getting,” says Lacy, who also sings and plays trumpet, French horn, tuba and classical euphonium. “I think the States could give more appreciation for the trombone, and I’m trying my best to make that situation happen.”

He speaks the truth. Lacy is at Smalls for the biweekly Tuesday night gig by the Smalls Legacy Band. He usually leads the six-piece ensemble-and released a recording with them, Live at Smalls, in May-though tonight it’s a seven-piece under the direction of trumpeter and regular band member Josh Evans. Still, Lacy-“Roots,” to his intimates-is by far the oldest and most experienced musician onstage, and that experience manifests itself in assured, virtuosic playing. He wields the trombone with a facility that belies the horn’s bulky build, letting loose with long, loud notes whose endings he twists into gymnastic tremolos.

Whether this astonishing performance says more about the trombone’s capabilities or Lacy’s, bandleaders of all stripes haven’t been shy about incorporating both into their music. His résumé could fill a book by means of both volume and diversity. The Houstonian began gigging professionally in his early teens, and since arriving in New York in 1981 has worked with, among others, Slide Hampton, Rufus Reid, Lester Bowie, Henry Threadgill, Bobby Watson, Art Blakey, McCoy Tyner, Marty Ehrlich, Abdullah Ibrahim, Michael Formanek, Roy Hargrove and Steve Turre.

In addition to the Smalls Legacy Band, Lacy is a member of a trio collective, 1032K (with bassist Kevin Ray and drummer Andrew Drury), and a 20-plus-year veteran of the Mingus Big Band. The latter he considers his primary gig; leader Sue Mingus (Charles’ widow), in turn, considers him an invaluable member. “He covers so many waterfronts,” she says. “He brings his own voice and his own personality, and brings his expertise on his horn. He brings his history and his understanding of music. He’s a super-talented individual on so many different levels.”

In its near-century of excellence, The New Yorker has been home to more than its share of tops-in-their-field contributors. There’s E.B. White, with his luminous … END_OF_DOCUMENT_TOKEN_TO_BE_REPLACED

Put a “the” in front of a name and it acquires historical heft. The Thelonious Monk who entered New York City’s WOR Studios as Halloween … END_OF_DOCUMENT_TOKEN_TO_BE_REPLACED

On the enchanted evening of August 16, 1958, Ella Fitzgerald took to the stage of the legendary Hollywood Bowl. There, with a lustrous orchestra conducted … END_OF_DOCUMENT_TOKEN_TO_BE_REPLACED

Be careful what you wish for.  By the beginning of 2020 guitarist Mary Halvorson, one of the most acclaimed musicians of her generation, was also … END_OF_DOCUMENT_TOKEN_TO_BE_REPLACED