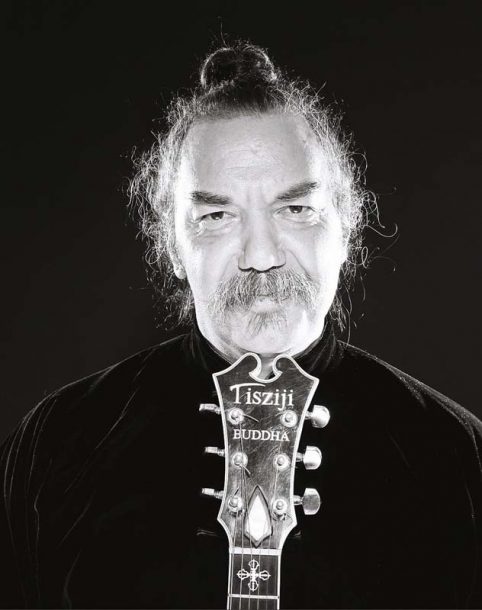 Here’s something funny: In the early ’60s, the guitarist Tisziji Muñoz sang in a doo-wop outfit called the Arrogants. This isn’t humorous for any musical reason; vocal groups aren’t chuckle-worthy, and there’s nothing inherently comical about a teenage baritone who evolves into jazz guitar’s best answer to John Coltrane. Instead, the laughs are generated by the ensemble’s moniker in relation to everything Muñoz stands for. In 1984, after a decade on the New York jazz scene, working primarily in the employ of saxophonist Pharoah Sanders, Muñoz retreated upstate to live a monk-like existence. His song titles include “No Self, No Thought, No Mind” and “Gracious,” and he quietly self-releases his music on a label called Anami, which means “nameless” in Sanskrit. This is a man who sees himself as one with the universe, not the center of it.

That’s not to say he’s timid, or unambitious. In addition to Sanders, Muñoz has worked with jazz greats like Rashied Ali, Ravi Coltrane, McCoy Tyner, John Medeski, Marilyn Crispell and Dave Liebman. And he clearly feels his music is worth hearing. Obsessively prolific, he has released nearly 60 albums as a leader or co-leader. So far, he’s put out four albums this year: the rowdy The Paradox of Friendship, featuring bassist Don Pate, drummers Adam Benham and Tony Falco and former Late Show With David Letterman pianist and musical director Paul Shaffer, a frequent collaborator over the years; Spirit First and Last, a blistering live date from 2004 with Pate, Falco, pianist Greg Murphy and second drummer Ra-Kalam Bob Moses; the peacefully chaotic Genius Awakening, with Pate, Moses and pianist Chris Caswell; and the full-tilt Space of Fire, a collaboration with the Canadian musicians Bernie Senensky (piano), George Koller (bass) and Greg Pilo (drums). So Muñoz is a fascinating contradiction: as giving as they come yet constantly pushing his unique spiritual vision, rooted in his devotion to Eastern religion. He is at peace, but never at rest.

Muñoz, 68, was born and raised in a Puerto Rican family in Brooklyn, not always peacefully. Almost from the start, life and music required tremendous determination and inner-strength. At age 5, Muñoz was pushed through a ground-floor window by a roughhousing cousin. While climbing back inside, a piece of glass severed an artery in his left wrist-an injury from which he has never fully recovered. “I had to be brought to a certain threshold of pain and suffering for me to come to terms with the fact that whatever I played was painful, was heart-related and had to be important; it had to be meaningful to me,” says Muñoz, seated in a barn on his property in New York’s Hudson Valley.

“[Everything I played] had to count; it wasn’t casual,” he continues. “It was intense, because even now I can only play a little bit-even now, after all these years of this chronic pain condition and nerve damage.” His injury made chordal playing tortuous, so to compensate Muñoz developed his trademarked style: soaring, overdriven single-note lines-even single-string lines-most often deployed over modal forms.

When you’re on TV, everybody knows you, or at least thinks they know you. Take Kevin Eubanks, who was on NBC’s Tonight Show five nights … END_OF_DOCUMENT_TOKEN_TO_BE_REPLACED

Jimmy Katz leads many lives. He is the preeminent currently active jazz photographer, and has shot more than 200 magazine covers and over 600 recording … END_OF_DOCUMENT_TOKEN_TO_BE_REPLACED

Take a look at Blue Note Records’ release schedule for 2022 and it’s hard to miss the significant percentage of electronic-oriented music. In March, the … END_OF_DOCUMENT_TOKEN_TO_BE_REPLACED