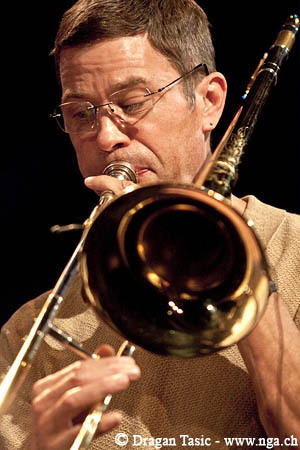 On Father’s Day, trombonist Ray Anderson, whose children are grown, celebrated with a door gig at the 55 Bar on Christopher Street in Greenwich Village. It was just past 6, and perhaps 10 patrons were present, including a gentleman with a pile of Anderson’s LPs and CDs for the leader to autograph later. Among them was Every One of Us, a 1992 date with Simon Nabatov, Charlie Haden and Edward Blackwell, which contains Anderson’s “Kinda Garnerish,” the evening’s kick-off number. After Anderson’s florid opening cadenza, bassist Mark Helias and drummer Tommy Campbell hit a funky groove, propelling an epic, swinging trombone solo; Anderson executed fast passages with trumpetistic clarity and brightness, and juxtaposed them to extravagantly vocalized bottom-register effusions.

“We’re warmed up now,” Anderson said. “Might as well move on to the abdominals.” He lit into “Right Down Your Alley,” the title track of a 1984 release with Helias and drummer Gerry Hemingway, still a collaborative unit called BassDrumBone. Anderson nailed the theme-fast, octave-leaping postbop passages, a jump-cut to a slow blues, another jump-cut to postbop-and launched chorus upon chorus of fresh ideas at a supersonic tempo, goosed by Campbell’s instant responses and Helias’ in-the-pocket basslines. Helias’ half-chorus lowered the volume to a subtone, introducing an open section. Campbell tone-painted harmonics on the cymbal; Anderson wove multiphonics and overtones into the flow with didgeridoo-like tone, telling the story with precisely calibrated roars, yowls, snorts, moans, squiggles, jabs and swoops.

Anderson recorded “Cheek to Cheek” in 1990, on Wishbone. Here, as the beat feel morphed from slow-medium to foxtrot to Latin, he excitedly traversed the horn’s entire range without losing sight of the melody, interpolating quotes from, among other references, “I Cover the Waterfront” and “I Got Rhythm.” On a way-up “Bohemia After Dark,” which Anderson covered on his 1985 album Old Wine-New Bottles, with Kenny Barron, Cecil McBee and Dannie Richmond, he waded into the swamp with his plunger, quoting generously from the Ellington trombonist Tricky Sam Nanton, an association that perhaps inspired Anderson to conclude the set by singing “I’m Just a Lucky So-and-So.”

A few days later at a teahouse in the Village, Anderson, 62, traced his anything-goes sensibility to his formative years in Hyde Park, on Chicago’s South Side. There, during his impressionable teens, he attended concerts presented by the then recently formed AACM. “I saw the Experimental Orchestra, which was jaw-dropping,” he recalled, before citing a duo concert by Roscoe Mitchell and Joseph Jarman at University Church, across the street from the University of Chicago campus. “These cats were surrounded by instruments, including all these bells and gongs, a Theremin and every reed you could imagine, just moving through this space making this beautiful sonic sculpture, and then all of a sudden they go, Vommm! … Bupp-ba-peckadadee-playing [Mitchell’s] ‘Nonaah’ or something. It blew my mind. The AACM blazed a path that allowed you to do everything. You can play that sonic sculpture like Boulez, and go into a reggae tune. You can play bebop, but play it any way you want. I don’t do what they do, but I took that reality to heart.”

Anderson had to rebuild his embouchure after a severe case of Bell’s palsy in 1983. But on 13 leader recordings and five with BassDrumBone between ’84 and 1999, he delivered that inclusive aesthetic with promethean chops and a charismatic personality that generated extensive accolades from the jazz press. And he averaged, by his estimate, six months a year on the road. But that chapter of his career ended when his wife was diagnosed with Stage-4 breast cancer, which she battled for three years until her death in 2002. As the single parent of two children, Anderson scaled back and assumed a close-to-home position as professor of jazz studies at Stony Brook University, where he is still employed.

Out of the public eye over the ensuing timespan, Anderson endured a second bout with Bell’s palsy and a fight against laryngeal cancer. Exacerbating his struggle was a diabetic condition that emerged in 1974, a year after he moved to New York following a period in California. That his creative juices never stopped percolating is clear from three excellent CDs on the Intuition label, most recently Being the Point, on which the Organic Quartet (Campbell on drums, Stony Brook colleague Steve Salerno on guitar and Gary Versace on organ) improvises with efflorescence on seven originals. Hear You Say: Live in Willisau documents a 2009 quartet concert co-led with reedman Marty Ehrlich, while Sweet Chicago Suite, recorded in 2010 and titled for the six-part opus that begins it, features Anderson’s Pocket Brass Band, comprising the late trumpeter Lew Soloff, sousaphonist Matt Perrine and drummer Bobby Previte.

“Each piece is about formative experiences growing up in Chicago [that became] very much part of my ongoing personality,” Anderson said of Sweet Chicago Suite, which he premiered at the Chicago Jazz Festival in 2002, 12 days after his wife’s death. Imbued with the workshop sensibility that defined Windy City musical expression during the turbulent ’60s, Anderson constructs a self-portrait that references the influence of the AACM (“Magnificent Mistifiyo”), Willie Dixon (the slow-drag “Chicago Greys,” built on a refrain evocative of Ellington’s “The Mooche”), Lee Morgan and Horace Silver (a boogaloo soul-jazz number called “High School”) and James Brown and Sly Stone (the brisk, funky, inside-to-free “Going to Maxwell Street”). On the hymnal “Some Day,” Anderson pays homage to the black church as embodied by the Reverend Jesse Jackson’s historic weekly sermons for Operation Breadbasket. “My father taught at Chicago Theological Seminary, and Jesse Jackson was a student of his,” Anderson said. “My dad would say, ‘He never did finish, because he had way more important things to do,’ which he did.”

The blend of ivory tower and street culture that defined the Hyde Park experience was a heady environment for a child, as was the University of Chicago Lab School, where George Lewis was a classmate. “In fourth grade, we were the only two kids who selected the trombone,” Anderson recalled. Early on, he dug the “sly-dog humor” of Vic Dickenson and “tone quality” of Trummy Young; as time progressed, he appreciated the “incredible fleetness” of J.J. Johnson, Curtis Fuller, Carl Fontana and Frank Rosolino. “When I started listening to the Ellington trombones, it was all over,” he continued. High school music teacher Dean Hay, a trombonist, introduced him to Roswell Rudd, then making his presence felt with the New York Art Quartet and with Archie Shepp on Live in San Francisco.

From the beginning, Anderson incorporated elements from all these sources in constructing a tonal personality. “I never made anything even resembling an innovation on the trombone by deciding to do it, or tried to figure out how to play faster or higher from an intellectual vantage point,” he said. “You try as hard as you possibly can to express what you’re feeling inside, which is very powerful if you allow yourself to actually feel it, and let that energy explode out of the horn. You sometimes feel that you want to play every single note there is, all at once, now. What does that sound like? That’s what drives technique.”

In 1978, Anderson emerged on the international stage after Lewis recommended him as his replacement in the Anthony Braxton Quartet. “Before Braxton, my career was mostly Latin bands, which wasn’t going to result in Ray Anderson groups or records,” Anderson said. “When I got the gig, we rehearsed in Chicago for a few weeks, and I spent eight hours a day in the basement of my parents’ house trying to learn to play this shit, which was kicking my ass! The intensity of the creative demand forced you to find different stuff, to make a different sound as well as develop the ability to move around the horn and articulate. I made huge leaps.

“I’d try to figure out what to do to play with what Braxton was doing, and either support it in some kind of contrapuntal way or get in there with the same type of energy or sound. One day Braxton told me, ‘Ray, I’m over there playing my thing. You stay over there and play your thing.’ That was highly educational. Everything is related, but it doesn’t have to be in a tight way. You could argue that’s a real Chicago perspective, a way of making the canvas bigger, getting a wider focus, like pulling back the movie camera and seeing not only the lovers embracing under the palm tree but that Krakatoa is about to go off.”

In following that “big-canvas” aesthetic, Anderson has sought “to represent all the different aspects of what a given band is doing” on his recorded corpus. An exception is the self-produced duo recording Love Notes, from 2009, on which Anderson and Salerno explore 10 standards that address the subject of love from various angles. Adjectives like “loud,” “aggressive,” “boisterous,” “brash,” “blustery’ and “wild and wooly”-those descriptives are culled from mainstream press accounts of Anderson’s work of the ’80s and ’90s-decidedly do not apply.

“For many years I wanted to make an album of romance that is a unified work of art,” Anderson said. “It’s a tighter focus. There’s considerable variation, but it inhabits an area. I was thinking about the lyrics, and the way I feel about these songs made me play in a way that’s not as wild. There’s a lot of grief in that record, too. Guess what? I’m not one-dimensional.”

When you’re on TV, everybody knows you, or at least thinks they know you. Take Kevin Eubanks, who was on NBC’s Tonight Show five nights … END_OF_DOCUMENT_TOKEN_TO_BE_REPLACED

Jimmy Katz leads many lives. He is the preeminent currently active jazz photographer, and has shot more than 200 magazine covers and over 600 recording … END_OF_DOCUMENT_TOKEN_TO_BE_REPLACED

Take a look at Blue Note Records’ release schedule for 2022 and it’s hard to miss the significant percentage of electronic-oriented music. In March, the … END_OF_DOCUMENT_TOKEN_TO_BE_REPLACED