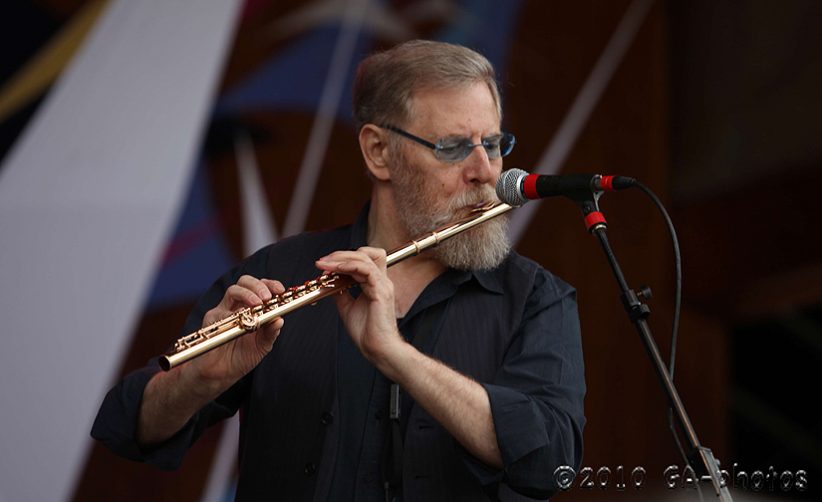 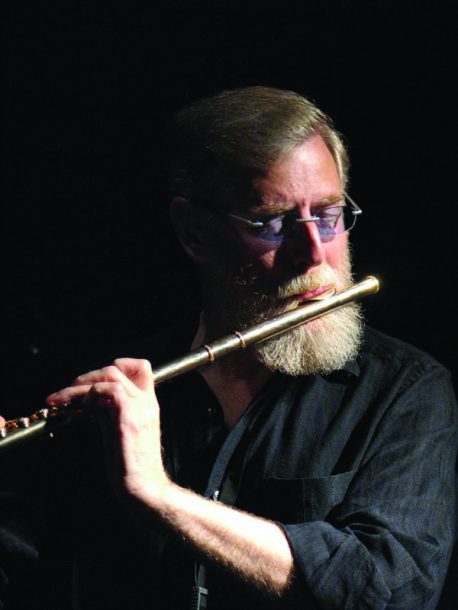 At the album release show for Soundscapes, his first disc as a leader in five years, the 75-year-old tenor saxophonist and flutist Lew Tabackin peppered his spry rendering of “Afternoon in Paris” with references to Ellington’s “Rockin’ in Rhythm”-a defiant riposte to the mass shooting of Nov. 13. “It was kind of appropriate to play something in relation to Paris,” Tabackin told the crowd gathered at Club Bonafide, on 52nd Street in New York.

Fronting his longtime trio-drummer Mark Taylor has been a member since 1982; and bassist Boris Kozlov, of the Mingus Big Band, has toured with Tabackin since 2000-Tabackin demonstrated that his prodigious hard-bop acumen is still intact, as is his full-bodied tenor sound. On flute, his personality is more Pan-like, leavened by the judicious use of vibrato or growling to drape a narrative around the changes. On this night, that meant an East-meets-West tale enlivened by liberal quotes from “Love for Sale,” “Moonlight Serenade” and the Noh theatre, and interweaving Ellington’s “Sunset and the Mockingbird” with as many Bird-like lines as he could muster. In the audience was pianist, bandleader and NEA Jazz Master Toshiko Akiyoshi, Tabackin’s musical partner and wife of nearly 50 years, who had just flown in from Japan.

Tabackin is one of the most prolific yet unsung tenor saxophonists of his era, and an integral component of the jazz-flute tradition. “Lew was one of the first guys I heard as a teenager, and he knocked me out,” says the great saxophonist and educator Dave Liebman. “He has absorbed most notably early Sonny Rollins, but it is his wonderful flute playing that puts Lew in a class of his own.”

In addition to 23 albums with the Toshiko Akiyoshi-Lew Tabackin Big Band, and the Toshiko Akiyoshi Jazz Orchestra Featuring Lew Tabackin, which ceased regular performances in 2003 after a 30-year run, he has performed with the Thad Jones/Mel Lewis Orchestra, Freddie Hubbard, Clark Terry and countless others. He met Akiyoshi in 1967, when she subbed for Don Friedman in Terry’s band. Tabackin held down gigs in the house band for Dick Cavett’s talk show and The Tonight Show, and moved to Los Angeles when the latter program relocated to California in 1972. He and Akiyoshi formed their storied big band a year later, returning to New York in 1982, where they have remained since.

Yet of Tabackin’s dozens of releases as a leader, many essential recordings are hard to find or out of print: Tenor Gladness, with fellow saxophonist Warne Marsh; Black & Tan Fantasy, with bassist John Heard and drummer Billy Higgins; and Duo, with John Lewis, who composed “Afternoon in Paris,” have never been reissued.

This lack of catalog prompted jazz photographer and producer Jimmy Katz to produce Soundscapes, most of which was recorded at Steve Maxwell Vintage and Custom Drum Shop in Midtown Manhattan. (“Yesterdays” was recorded at Tabackin’s basement home studio.) “I think the recording process for a lot of people is painful, so I wanted to create an environment that was very relaxed and easy, like recording in your friend’s living room,” Katz says. “There were no time limits on this.”

Katz also shot the cover photo of Tabackin, taken in Central Park at dusk. “I have a distinctive sound when I shoot,” he says of his tonal palette. “The idea is of a very heroic image of a jazz musician forging ahead no matter what.”

Soundscapes includes five standards and three originals, the latter comprising what Tabackin calls his “Japan Trilogy.” Tabackin wrote the lilting “Garden at Lifetime” for Garden Cafe Lifetime, a jazz club in Shizuoka. The piece evokes the tradition of courtly gagaku improvisation and is partially inspired by Japanese composer Toru Takemitsu. The club’s owner, pianist Yutaka Kubota, built a Noh stage in the garden at Fugetsuro, Shizuoka, and commissioned Tabackin to perform live improvised flute accompaniment to a performance of Hagoromo. “I’m trying to introduce a combination of what I hear in Japanese sounds with Western contemporary classical, so it’s a cross-cultural improvisation,” he says. “Minoru” is a ballad dedicated to Minoru Ishimori, the late Japanese saxophone technician who made innumerable last-minute repairs for Tabackin while on tour. “Bb Where It’s At” is for B Flat, a club in the Akasaka section of Tokyo.

Tabackin grew up in Philadelphia, where his earliest jazz idol was Al Cohn, who also hailed from the city (they would later collaborate). He began on flute and bought his first saxophone at 15, when a lack of proper embouchure couldn’t deter him. “After about four hours, I could actually get a sound,” Tabackin remembers. “I thought I got kind of close, and I’m sure it wasn’t, but I had a concept and I focused in on it.”

Using a high-baffle Otto Link mouthpiece and a hard reed-a setup requiring enormous lung capacity and control-Tabackin developed what he describes as “a loud subtone” that resonates with as many overtones as possible to create a richer timbre, combining the buzz of the lower register with the breathiness of the flute. On flute, Tabackin’s distinctive style falls somewhere between Jean-Pierre Rampal and Frank Wess, but on tenor, the yoke of Sonny Rollins and John Coltrane was hard to shake. “I was a pretty good mimic, but I decided that spending your life emulating someone is a dead end,” Tabackin says. He dug deep into Lester Young (“It’s like Mozart,” he says), Ben Webster’s “tragic beauty,” Don Byas and Coleman Hawkins (“the source”), finally honing a style that pairs double-time glossolalia with sudden moments of tender understatement. “It took till I was about 40 years old to solidify what my concept was, which is an ongoing thing,” he says.

Though Tabackin is perhaps best known as a big-band soloist, he has long preferred the saxophone-bass-drums trio for small-group playing; unless it’s with Akiyoshi, he rarely performs in quartets. After moving to New York in 1965, Tabackin eventually began subbing for multireedist Joe Farrell with Elvin Jones’ group at Pookie’s Pub, a now-shuttered club across from the Half Note in the Village. When Wilbur Ware returned from Chicago, Tabackin encountered him at the gig. “It was a scary experience and I was really nervous, but an interesting thing happened,” Tabackin says. “Every note I played, Wilbur made my note sound good. He was a pure genius.” From there, Tabackin got his own gig for $5 a night at La Boheme, a club near Lincoln Center, which he accepted on the condition that he could stick to the trio format with house drummer Jimmy Lovelace and a rotating cast of bassists. When Tabackin ran out of money, he would book studio sessions or Broadway pit-orchestra gigs and have Dave Liebman fill in.

For Tabackin’s first non-Tonight Show performance in Los Angeles, the scene was not as sanguine. “The place was really packed, but by the end of the first set it was empty,” Tabackin says. Playing with Higgins and Charlie Haden restored his confidence. “After two or three bars of playing with Billy Higgins, I knew it wasn’t me, it was [the audience].”

Today, Tabackin bridges the intergenerational gap between performer and audience with sheer force of conviction. “They don’t get the jokes, so you have to approach every gig, every performance, like a Zen experience,” he says. “You have to try to become one with the audience and create enough positive energy to bring people in. Even though they don’t know anything about what you’re doing, it becomes unnecessary to understand the whole tradition. You can feel it.”

Tabackin already has plans for a three-night residency at Dizzy’s Club Coca-Cola, a European tour and a Japanese tour, all of which he books himself. But he hopes Soundscapes will document his ongoing evolution, especially in New York, where audiences tend to have a short memory. “People forget about you. ‘Are you still playing?'” Tabackin laments. He is-every day. “When I was a kid, I used to read Jean-Paul Sartre and the existentialists. My whole philosophy is ‘You’re not a writer; you’re becoming a writer. You’re not a saxophone player; you’re becoming a saxophone player,'” he says. “Whatever it is, you’re in the process, so there’s no room to just lay back and say, ‘I’m cool.’ You have to see how far you can take it, and as long as you’re physically able to do it, there’s no limit.”

When you’re on TV, everybody knows you, or at least thinks they know you. Take Kevin Eubanks, who was on NBC’s Tonight Show five nights … END_OF_DOCUMENT_TOKEN_TO_BE_REPLACED

Jimmy Katz leads many lives. He is the preeminent currently active jazz photographer, and has shot more than 200 magazine covers and over 600 recording … END_OF_DOCUMENT_TOKEN_TO_BE_REPLACED

Take a look at Blue Note Records’ release schedule for 2022 and it’s hard to miss the significant percentage of electronic-oriented music. In March, the … END_OF_DOCUMENT_TOKEN_TO_BE_REPLACED