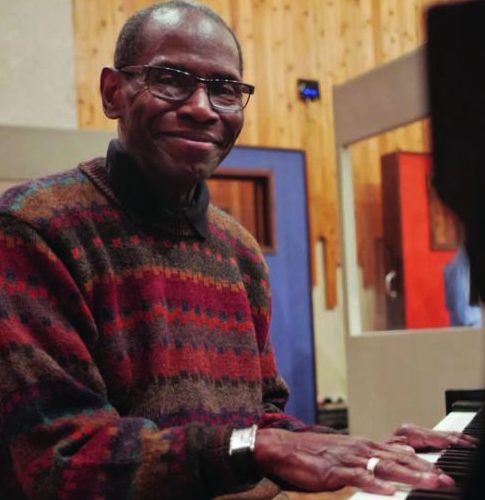 Owner of an identity, with hints of Herbie

The notion that George Cables has received insufficient acclaim during his half-century as a professional jazz musician gave bassist Stanley Clarke pause. “It depends what view you’re looking at,” Clarke suggested at Manhattan’s Blue Note in November, a day after reuniting with Cables and drummer Lenny White—once the rhythm section for Joe Henderson—for the first time in 44 years. “Younger people, normal people who don’t listen to jazz or the evolution of jazz, may not know who George is. I’ve played with a lot of piano players—Herbie Hancock, McCoy Tyner, Chick Corea—and George is right there. His touch and vocabulary always tell me it’s him. He always sounded like himself.”

On the bandstand an hour later, the trio received raucous applause from a packed house consisting primarily of baby-boomer-and-older “normals” who barely responded when the emcee announced Cables’ name. That changed after Cables, undaunted by the arena-level bass amplification, expertly addressed Clarke’s “3 Wrong Notes.” On that barely disguised contrafact of Charlie Parker’s “Confirmation,” he sculpted a melodic path through the changes at race-car velocity, interpolating his own voicings and building an arc that climaxed with rhythmically assured 16- and 32-bar exchanges with White.

During “On Green Dolphin Street,” which proceeded to a “Poinciana” beat, Cables showcased the finely calibrated touch and harmonic savoir faire Clarke had referenced. He reharmonized Henderson’s “Recorda-Me,” on which he toyed catlike with the time, generating multiple choruses of fresh ideas. Each declamation provoked proportionally louder applause, but you could hear a pin drop after Cables completed his solo on “Helen’s Song,” an elegant, tender tone poem for his late soulmate, Helen Wray, that he first recorded in 1984, on a trio album with Clarke and drummer Peter Erskine for the Japanese market.

In sum, Cables, who turned 71 four days after the gig, displayed the same qualities that consistently infuse his 30-plus recordings as a leader. The most recent of those is 2015’s In Good Company, the third date he’s completed for HighNote since he endured and recuperated from a simultaneous liver and kidney transplant procedure in the fall of 2007. Like its predecessors, Icons and Influences and My Muse, In Good Company is a swinging, probing, endlessly melodic trio recital, on which bassist Essiet Essiet and drummer Victor Lewis navigate repertoire by Ellington/Strayhorn, John Hicks and Kenny Barron.

Further corroborating Cables’ stature are dozens of high-profile sideman recordings during the ’70s and ’80s with Sonny Rollins, Max Roach, Roy Haynes, Woody Shaw, Freddie Hubbard, Bobby Hutcherson, Dexter Gordon, Art Pepper, Philly Joe Jones and more. Then, too, Cables has generated several dozen compositions that hold pride of place in the late 20th-century jazz canon. In recent years, Cables has heard his music illuminated as a member of the Cookers, the popular hard- and postbop all-star band organized by trumpeter David Weiss. Cables’ compositions, as the singer Sarah Elizabeth Charles puts it, “are honest and emotionally based as opposed to being overly intellectual, but at the same time, because of his knowledge as a player, come out in a way that’s subtly complex.”

Charles recently collaborated with Cables on a project that will constitute his next HighNote album, due out in 2016. “Over the years people told me that my songs have strong potential for lyrics, and asked if they could write them,” Cables said in late October, at the New School in New York. (There he directs the Herbie Hancock Ensemble, in which Charles enrolled in 2011.) “Playing with Dexter reinforced my attention to lyrics, and as I got older and more mature they appealed to me more.”

The rapport between Cables and Charles strengthened when he heard her variations on Hancock’s “Driftin’,” from Takin’ Off. Charles asked the young singer to collaborate on arrangements featuring Janice Jarrett’s lyrics, written several decades ago, to his songs “I Told You So,” “Blue Nights,” “Love Song,” “Ebony Moonbeams” and “Think on Me,” among others. “George had boxes and folders and briefcases filled with handwritten charts that he played for me,” Charles recalls of their rehearsals. “He’d tell me the stories behind the songs, what inspired him to write them. He doesn’t write to impress. Years ago, he probably asked himself, maybe consciously or subconsciously, ‘What kind of player am I going to be and what is my identity as a musician?’ He took time to clearly define that.”

Cables began that process in the St. Albans section of Queens. He started classical lessons at 5 and came to jazz after graduating from New York’s High School of Performing Arts. While studying at Mannes School of Music at the New School, he independently immersed himself in jazz language via close study, first and foremost, of Wynton Kelly, Herbie Hancock and Thelonious Monk. He put their lessons into practice at jam sessions in his basement, attended by the likes of poet and pianist Weldon Irvine, drummer Billy Hart and saxophonists Dave Liebman and Steve Grossman, and with the Jazz Samaritans, a neighborhood combo that included Grossman, drummer Billy Cobham and bassist Clint Houston. Not long after Cobham entered the Army in 1965, White, still in his teens, assumed the drum chair. “I thought George was the closest thing I’d get to playing with Herbie,” White recalled. “We played through a lot of different kinds of music together. George is a bit older than me, and he was up on things. All his contemporaries showed up in his playing, but he was always George Cables.”

By 1968, Cables, Houston and White were getting local work as a rhythm section, including a stand with Woody Shaw and Booker Ervin at a club in Westbury, on Long Island, and another with Jackie McLean at Slugs’, where, in 1969, Cables debuted with Art Blakey and the Jazz Messengers. In May of that year, he cemented his position in the big leagues when Sonny Rollins took him to Los Angeles for an extended engagement. “The feeling of swing and the touch was there,” Cables recalled. “I adjusted, adapted and learned how to use my voice. You can touch the piano a million different ways and get a million different sounds. Herbie opened doors for me. I loved his sound, and I’d sit at the piano and try to figure out his voicings. His Blue Note records and the ones with Miles were real lessons. One day I was listening to something from Takin’ Off, and I realized that he got the voicing I was looking for with two or three notes in his left hand. That was so helpful to me.

“I tell students that piano is a percussion instrument,” he continued. “My feeling about jazz is in the drum-not just that instrument, but the drum inside you. I try to hook up with the drummer one way or the other, play cadences with the drummer, do something to get us to feel each other so we can lock up. My approach to comping is to play the chords rhythmically so you create motion; you’re going from one place to another, not just standing in one place and then another.”

He intends to keep moving forward. “The music I play has been around for a while, and I’ve certainly been around a while, but I don’t feel like my music is old old,” Cables said. “It’s maybe not exactly what many contemporary people are playing, but so what? Some things I might not like today, but maybe tomorrow I will. That’s the great thing about jazz. Its arms are wide open, and it’s welcoming to whoever you are, wherever you’re from. ‘You want to learn this? OK, learn this. But don’t do it the way I do it. Do it your way. Be yourself.'”

Joe Henderson Quintet At the Lighthouse: “If You’re Not Part of the Solution, You’re Part of the Problem” (Milestone, 1970)

Put a “the” in front of a name and it acquires historical heft. The Thelonious Monk who entered New York City’s WOR Studios as Halloween … END_OF_DOCUMENT_TOKEN_TO_BE_REPLACED

On the enchanted evening of August 16, 1958, Ella Fitzgerald took to the stage of the legendary Hollywood Bowl. There, with a lustrous orchestra conducted … END_OF_DOCUMENT_TOKEN_TO_BE_REPLACED

Be careful what you wish for.  By the beginning of 2020 guitarist Mary Halvorson, one of the most acclaimed musicians of her generation, was also … END_OF_DOCUMENT_TOKEN_TO_BE_REPLACED

Guitarist Will Bernard bears the bittersweet blessing of virtuosic skill and eclectic taste, making his music a perpetual delight and yet hard to categorize. Maybe … END_OF_DOCUMENT_TOKEN_TO_BE_REPLACED