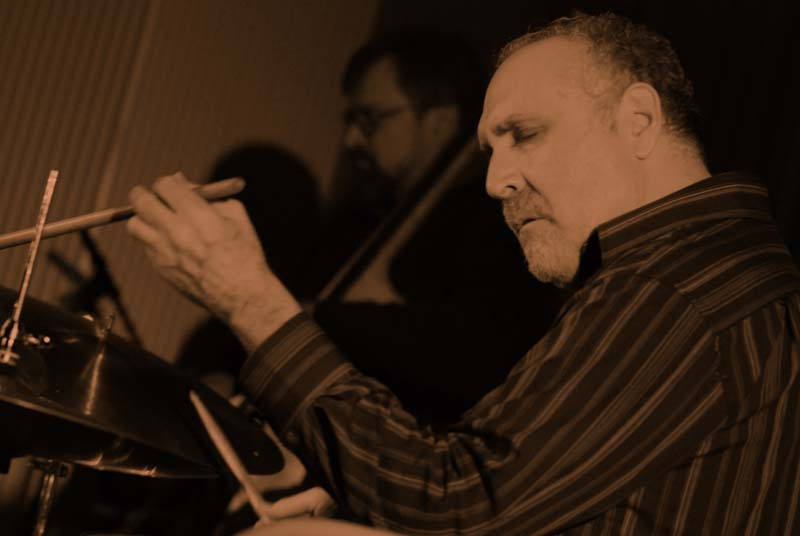 A Billy Mintz rehearsal doesn’t entail much instruction. Gathered for an informal session with bassist Mark Wade and pianist Roberta Piket in the Teaneck, N.J., house he shares with Piket, his wife of four years, Mintz hands out sheet music for a yet-to-be-titled new composition. Waving his hand vaguely at a section of the page, he says, “Do whatever.” Otherwise, as he switches between congas and drum kit in the cramped music room between the couple’s living room and kitchen, he repeatedly tosses out the word “vibe.”

“For me, it’s more about vibe than anything else,” Mintz shrugs a little later, snacking on bagels and nachos on their back porch. “The whole general feeling of it.”

“That’s kind of what jazz is about,” Piket adds.

“That’s what everything is about,” Mintz replies with a throaty chuckle.

That outlook certainly applies to Mintz’s career, which has seen him follow his whims from one coast to another and back again, from show bands to rock groups to parallel lives in the straight-ahead and avant-garde jazz worlds. He began playing professionally at resorts in the Catskills as a teenager in the early 1960s; his debut release as a leader finally arrived in 2013, with a self-titled album by the Mintz Quartet featuring Piket, saxophonist John Gross and bassist Putter Smith. Earlier this year, he followed that release with the first CD by his 10-piece 2 Bass Band, which he’s led in one incarnation or another for 25 years.

Mintz’s delayed emergence in the spotlight has more to do with circumstance than with any late-blooming interest in career building. Both albums were released through Piket’s Thirteenth Note Records imprint, meaning that the business side of things was taken care of right at home. “With most musicians, of course, the music is a priority, but there’s some thought in your mind that you’d like some recognition,” Piket explains. “Billy, more than anyone I know, doesn’t think that way. He’s not the kind of person who really wants to deal with manufacturing and artwork and all that crap.”

Hesitant to talk about himself, Mintz only half-jokingly suggested that Piket stand in for him during the interview for this story; he gradually warmed up, even if he often stopped mid-sentence to watch his cat stalk a nearby dove. He and Piket first met onstage in the late ’90s, during a gig with trombonist Joey Sellers. The pianist’s first impression of her future husband, hidden behind his trademarked shades even in a dimly lit nightclub, was “Who is this weirdo?”

Mintz was born in Queens in 1947, and was beating on pots and pans as far back as he can remember. His uncle was a professional saxophonist in New York City, but he insists that an offhand comment by his father was his inspiration for picking up the sticks. “My father said that he owned a set of drums but his brother sold them,” Mintz says. “I think that idea made me want to play the drums, believe it or not. I think he played the drums for maybe two months, but that stayed in my head when I was a young kid.”

Mintz’s first gig came at age 12, at a synagogue in the Laurelton neighborhood of Queens. A few years later he was playing in show bands in the Catskills, providing invaluable experience for the diverse career to come. “Every night a different singer and comedian would come in, and you’d never really rehearse,” Mintz says. “It’s great seasoning for your instincts and your sight reading. You really have to be in the moment in those kinds of gigs.”

Mintz spent the 1970s taking advantage of the panoply of opportunities available to a New York City musician. A typical week might include playing with a country band at Max’s Kansas City one night; a cabaret or off-Broadway show the next; a regular Thursday night gig with the Eddie Daniels Quartet at Stryker’s, the long-defunct Upper West Side jazz bar; a show at CBGB with rootsy pop-rockers the Cryers; and a wedding or bar mitzvah on the weekend to pay the bills.

In 1981 Mintz relocated to Los Angeles with characteristic lack of forethought. Pianist Mike Garson (best known for the famous solo on David Bowie’s “Aladdin Sane”) had come up with Mintz in the Catskills and made the move west in 1978. “Mike was having a good time out there, and he called me to come out for a few months to play a bunch of jazz gigs with him and [bassist] Bob Magnusson,” Mintz says. “So I did that, and after about two years of going back and forth I just stayed out there. For 20 years.”

It was in L.A. that Mintz began his bipolar life playing simultaneously with straight-ahead and avant-garde artists. At one end he worked with veterans of the cool scene, like Pete Christlieb and Bill Perkins, as well as bands led by Bill Mays and Bobby Shew. He also settled into a long relationship with pianist Alan Broadbent that has been revived in recent years, thanks to Broadbent’s move to New York State. At the same time, Mintz was beginning collaborations with the likes of Vinny Golia, Nels and Alex Cline and Ken Filiano. “L.A. has a deep, deep jazz history, and when I moved there it was the tail end of an amazing era,” Mintz says. “I was very fortunate to play a million kinds of gigs.”

Working with the likes of Mays, Magnusson and trombonist Bruce Fowler, Mintz could have followed their lead into the lucrative world of session and soundtrack recording. He did a stint on The Merv Griffin Show and played a five-week run in Las Vegas with dancer and actress Juliet Prowse, but his temperament never really fit the showbiz lifestyle. He did one film-scoring session with Mays for the Oscar-winning 1997 Jack Nicholson flick As Good as It Gets and immediately decided never to return. “We played the same fucking shit for like four days and nobody said anything to me, they just left me alone, so I didn’t care. I was making my studio bread. Finally the engineer said, ‘Billy, can you give me a little more hi-hat on 2 and 4?’ Anybody who knows me well knows not to say anything to me because I go psychotic. I kept my psychosis inward, but that was it. I still get royalty checks.”

Around 1990 Mintz founded the first version of the 2 Bass Band with musicians like Fowler and saxophonists Bob Sheppard and Kim Richmond. The dueling basses aren’t a defining element of the band so much as an informal tag made official through use; in fact, one early incarnation featured five bassists. “At one point I told all the bassists to start walking,” Mintz says, laughing heartily at the memory. “It reminded me of watching these old Western movies where there’s a herd of horses, but it was an amazing thing.”

Mintz returned to New York in 2003, in part due to his relationship to Piket but also because he found himself traveling east with increasing frequency. He revived the 2 Bass Band with players from the city’s more experimental scene, including trumpeter Dave Ballou, saxophonist Tony Malaby and bassists Steve Swell, Michael Formanek and Ken Filiano. As Mintz’s interests shifted from large-scale improvisation to composition and arrangement, the ensemble evolved into its current lineup of trumpeter Ron Horton, trombonist Samuel Blaser, saxophonists John O’Gallagher and Adam Kolker and bassists Cameron Brown and Masa Kamaguchi. “I needed guys who truly understood the particular art of playing in a section,” he says.

Mintz’s schedule remains diverse. Besides regular gigs with Piket and Broadbent, he’s released a duo CD with John Gross and recorded with pianists Russ Lossing and Rema Hasumi and in a quartet co-led by pianist Sylvie Courvoisier and violinist Mark Feldman. Though it’s dangerous to predict what might happen next, the most likely option is a solo drum CD, building on decades of performances. In addition, he’d like to someday revisit the hours of recordings made by the L.A. version of the 2 Bass Band. “Something like that,” he says. “I never plan anything.”

When you’re on TV, everybody knows you, or at least thinks they know you. Take Kevin Eubanks, who was on NBC’s Tonight Show five nights … END_OF_DOCUMENT_TOKEN_TO_BE_REPLACED

Jimmy Katz leads many lives. He is the preeminent currently active jazz photographer, and has shot more than 200 magazine covers and over 600 recording … END_OF_DOCUMENT_TOKEN_TO_BE_REPLACED

Take a look at Blue Note Records’ release schedule for 2022 and it’s hard to miss the significant percentage of electronic-oriented music. In March, the … END_OF_DOCUMENT_TOKEN_TO_BE_REPLACED

Those who are only familiar with bassist Martin Wind’s jazz credentials—both as a leader and as a first-call sideman for Bill Mays, Dena DeRose, Ken … END_OF_DOCUMENT_TOKEN_TO_BE_REPLACED