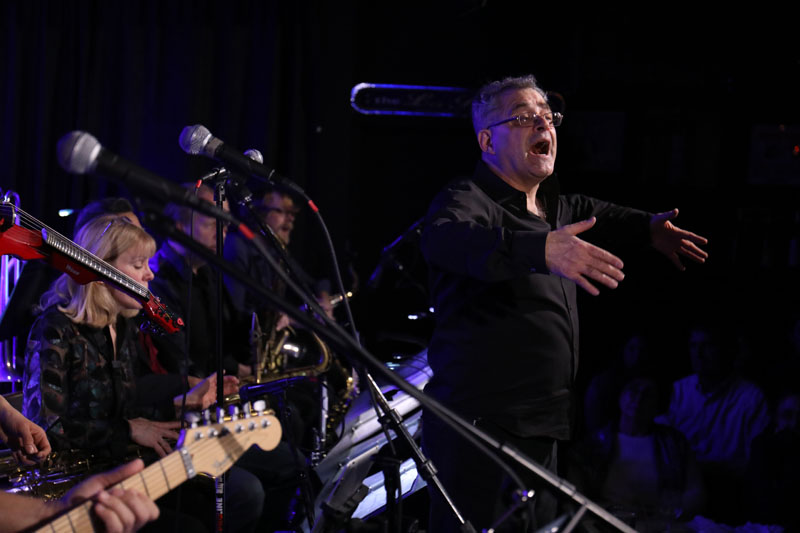 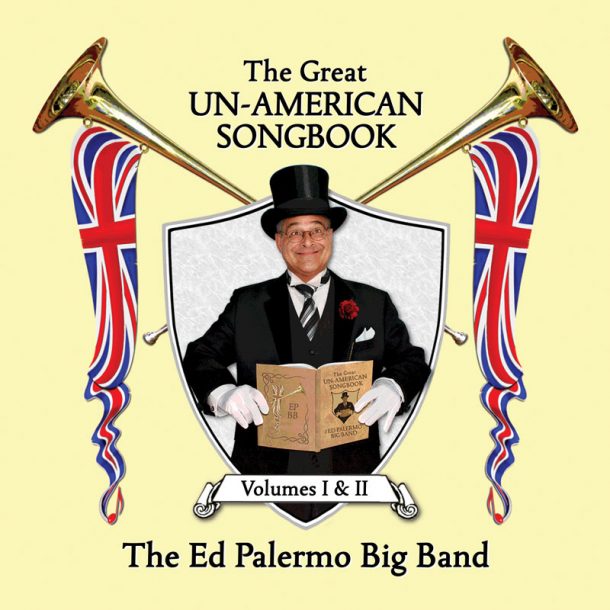 It’s a typical Monday evening at the Iridium at 51st and Broadway in Manhattan. An 18-piece big band is being led by a man in a huge top hat, white gloves and black cape. The music they’re playing is a raucous, cleverly arranged mashup of songs from the ’60s and early ’70s, mostly of the progressive-rock variety. Moody Blues hits collide with items from Frank Zappa’s back catalog. Emerson, Lake & Palmer’s “Bitches Crystal” briefly pays a visit to Wayne Shorter’s “Footprints” before morphing into King Crimson’s “21st Century Schizoid Man,” complete with horn parts reminiscent of a five-car pileup. A woman glides onstage to sing a campy version of the Vikki Carr hit “It Must Be Him.” She’s announced as being Vikki Carr herself; she isn’t. Later she reappears, wearing ghoulish face makeup, to dramatically declaim Arthur Brown’s “Fire” (this time she’s announced as “the ghost of Vikki Carr”). Toward night’s end, the band lays into a bullish rendition of the Beatles’ “Yer Blues,” with new lyrics that begin, “I hear tuba/Wanna die.”

OK, truth be told, this isn’t an entirely typical Monday evening at the Iridium. The guy in the cape—Ed Palermo—doesn’t always dress like this, and the band—the Ed Palermo Big Band—doesn’t normally lean so much on British prog-based repertoire. Tonight is a special night, the release party for the ensemble’s latest album, The Great Un-American Songbook: Volumes I & II (Cuneiform), which focuses on material by most of the artists mentioned above, along with the Rolling Stones, Cream, the Move, Jethro Tull, Procol Harum, even Blodwyn Pig. Still, in spirit, this show is entirely representative of what Palermo’s been staging in this midtown basement for the past decade: a goofily humorous tribute to his record collection that also doubles as a showcase for his formidable skills as an arranger.

“Arranging is the fun part for me,” the jovial, bespectacled 62-year-old bandleader says at a nearby Starbucks just before the show. “Zappa used to call it ‘dressing up the song.’ Hearing an arrangement played is the cherry on top, but the process of writing, when the ideas are flowing, that’s the main meal. Sometimes I’ll be working on a song and something about it reminds me of another song. Instead of ignoring it, my ADD tells me, ‘No, put that in there.’ And people talk about ADD as if it’s a bad thing! Pretty much every day I’m arranging something. I could go months without playing saxophone, but if a day goes by without arranging, I miss it.”

Palermo never goes months without picking up the sax, of course. He’s a fine altoist in the mold of Cannonball Adderley and Phil Woods. But he says of his own playing, with disarming honesty, “I gave up on trying to sound like myself years ago.”

Growing up in Ocean City, N.J., Palermo came to jazz through rock, with his primary inspirations being the Fab Four and Zappa’s Mothers of Invention. “I first saw Zappa in February 1969 at the Electric Factory in Philly,” he recalls. “He opened the show with the title track of Uncle Meat, which wasn’t out yet. I had never seen or heard anything this stimulating in my life, and I looked at Frank onstage and said, ‘I want to be that guy.’”

Following the example of another early influence, Edgar Winter, Palermo took up the sax and became, in his words, a “bebop Nazi.” As such, he developed the bopper’s primary non-chemical addiction—the connective-tissue chord progression known as the ii-V-I. “If I’d heard the Beatles doing that kind of sequence, I’d have automatically said it was corny,” he explains. “But as a jazz player, I began to realize it was pretty damn cool because of what people like Charlie Parker and John Coltrane did with it. It’s funny—sometimes I don’t even bring my saxophone to band gigs now. I love the songs that we’re doing, I just don’t like to play over them. I actually prefer the ii-V stuff.”

The Ed Palermo Big Band’s history goes back a lot further than the longrunning Iridium gig. Palermo has been leading an orchestra under his own name, on and off, for nearly 40 years, and for a good chunk of that time, his ensemble was playing a considerably different kind of music. The group’s first iteration, which concentrated mainly on Palermo’s own compositions, had a weekly slot at the hallowed Seventh Avenue South for three years in the late ’70s. It was eventually replaced by Gil Evans’ band, a move that Palermo handled with equanimity. “If I’m going to get kicked out by anybody, let it be Gil,” he says now. At the time, Palermo was also in the middle of a three-year stint with Tito Puente and establishing himself as a go-to session player.

With the Seventh Avenue South engagement lost, the big band struggled on, playing irregularly at downtown clubs like Visiones and the Bitter End and recording a couple of albums (the first, 1982’s Ed Palermo, featured cameos from pals Randy Brecker and David Sanborn). Then, in December 1993, Frank Zappa died. Upset by the passing of his hero, Palermo decided to do an all-Zappa tribute show at the Bitter End, arranging a selection of his favorite tunes for the band. “Doing the arrangements took two months,” he says. “During that time, word about the show got out on a bunch of bulletin boards. This was right at the beginning of the Internet. Nobody knew who I was, but people were hungry to hear some Zappa and they came from all over. The show happened in June of ’94, and wow. Up to then, my band was used to outnumbering the audience at our gigs, but that night the place was packed.”

Palermo had found a new audience and a new purpose. In the 23 years that have passed since that fateful night on Bleecker Street, he has written and performed more than 300 Zappa arrangements. A nine-year residency at the Bottom Line has been followed by the current relationship with the Iridium. After getting cease-and-desist letters from the notoriously control-freaky Zappa estate, he’s played down the connection (although he still keeps Frank’s music in heavy live rotation) while reintegrating both original music and other works into his sets. Six albums have been added to his discography, and there are plans for more, including a collection of songs by Todd Rundgren—whom Palermo calls “every bit the songwriting genius that Cole Porter and Gershwin are, particularly on his ballads”—and a rearrangement of Edgar Winter’s Entrance in its entirety. You can get an advance taste of the latter project on the second disc of The Great Un-American Songbook, as a choice snippet of Winter’s “Peace Pipe” gets tossed into Traffic’s “The Low Spark of High-Heeled Boys,” turning a brooding, piano-led space-rock tune into an uptempo funk excursion with a whirligig sax arrangement—an unexpected yet somehow completely logical twist.

Back on the stage at Iridium this evening, there are similar surprises. The most exciting of all comes when the knotty lines of Zappa’s “The Orange County Lumber Truck” suddenly dissolve into a joyous rendition of the Beatles’ “Tell Me Why.” It’s like the moment in The Wizard of Oz when Judy Garland steps from a sepia Kansas farmhouse into a Technicolor wonderland. Maintaining a big band for more than three decades is achievement enough; maintaining a big band that offers such unlikely epiphanies is even rarer. But for Palermo, the work is its own reward. And that’s probably just as well, considering that other kinds of rewards—the kinds that pay the bills—haven’t been all that quick in coming. “This whole thing is a money-eater,” he acknowledges with a chuckle. “The more notoriety I get, the more it’s costing me. I make my living as a music teacher [in suburban Westchester County]. But I’m spending my retirement funds on things that make me happy. All of this is memory lane for me. It’s a big nostalgia trip. I’m not trying to set a trend. It’s not like one of these days Maria Schneider’s going to be playing Blodwyn Pig songs.”

When you’re on TV, everybody knows you, or at least thinks they know you. Take Kevin Eubanks, who was on NBC’s Tonight Show five nights … END_OF_DOCUMENT_TOKEN_TO_BE_REPLACED

Jimmy Katz leads many lives. He is the preeminent currently active jazz photographer, and has shot more than 200 magazine covers and over 600 recording … END_OF_DOCUMENT_TOKEN_TO_BE_REPLACED

Take a look at Blue Note Records’ release schedule for 2022 and it’s hard to miss the significant percentage of electronic-oriented music. In March, the … END_OF_DOCUMENT_TOKEN_TO_BE_REPLACED

Those who are only familiar with bassist Martin Wind’s jazz credentials—both as a leader and as a first-call sideman for Bill Mays, Dena DeRose, Ken … END_OF_DOCUMENT_TOKEN_TO_BE_REPLACED