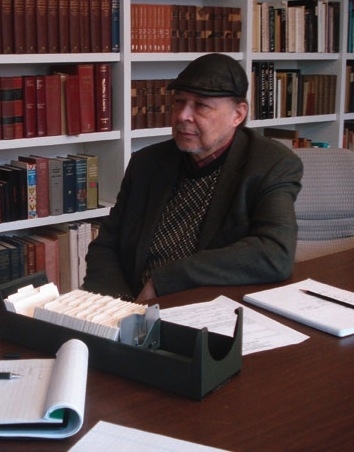 Before sitting down at the piano in a small room at Philadelphia’s Rosenbach Museum & Library in January, Dave Burrell instructed the intimate crowd to “picture me as an elder telling a story to the extended community.”

The request was not a difficult one to fulfill. Anytime Burrell, 71, begins to play, the result combines history, gravity, raw emotion and sage wisdom. A veteran of the 1960s and ’70s avant-garde Loft scene who played extensively with the likes of Archie Shepp, Pharoah Sanders and Marion Brown, Burrell has enjoyed a career renaissance over the past decade. To hear him today is to experience a singular sound that reaches back from the hard-edged attack of his free playing to ragtime and stride approaches.

At the Rosenbach, where he has been musician-in-residence since 2006, Burrell looked even further back-all the way to the Civil War. Located within a pair of 19th-century townhouses in Center City Philadelphia, the Rosenbach holds an extensive collection of rare books, manuscripts and art, including James Joyce’s manuscript for Ulysses, Bram Stoker’s outline for Dracula, the papers of modernist poet Marianne Moore, and letters and photographs from the collection of Lewis Carroll.

Once a year, Burrell premieres a new composition inspired by his research into the Rosenbach archives. The first, Bill of Sale for a Slave, was based on the personal narratives, poetry and recollections of slaves in conjunction with an exhibition on African-American history. In subsequent years, his music has explored Moore’s poetry and the settlement of the Oregon Territory, and his involvement with the institution has grown to include a position on the Rosenbach’s advisory committee.

His 2010 piece Portraits of Civil War Heroes was the first of a planned five-year exploration of the war. The work, as its title implies, painted musical portraits of many of the war’s most notable figures, including Robert E. Lee, Ulysses S. Grant and John Brown.

In January Burrell premiered the second installment, a six-part suite entitled Civilians During War Time. The pieces, penned by the composer and his longtime collaborator, violinist Odessa Balan, address the struggles of those who fought or suffered off of the battlefield. “Mama, I’m Still Hungry” depicted starving children with the mournful melodrama of a silent film score; “Code Name: Cheap Shot” told the story of female spies by evoking Morse Code and society ballrooms; “One Nation” combined themes from “Yankee Doodle” and “Dixie” and will be elaborated upon in each ensuing year.

But the opening piece, “Legend of Auction Block Runaways,” proved to be unexpectedly personal. Inspired by his research at the Rosenbach, Burrell decided to dig into his own history and discovered that his family lineage extends back to the wartime governor of Louisiana, Thomas Overton Moore, and a slave mistress. “I found it a tad uncomfortable,” Burrell admits, “but I was also empowered by it. It made the war effort more clear to me. I wasn’t looking at the war through a window, but I was in fact a descendant of slaves who were part of the Confederacy. I felt like I was a survivor.”

Growing up in Hawaii in the years prior to Statehood, the pianist never spent much time dwelling on the Civil War. “Going to high school in the Hawaiian Islands,” he recalls, “I didn’t know when the Civil War was and didn’t really care. It was just something that was so irrelevant. Usually the teachers would be squeamish about saying anything about slavery because they didn’t really understand it themselves. A lot of them were excellent teachers but had never been to the mainland United States.”

The Rosenbach residency, then, has become the latest opportunity for Burrell to weave together personal biography and broader historical narratives. His jazz opera Windward Passages traced his family’s move from Harlem to Hawaii, their struggles with being the island’s sole African-American residents, and his early experiences with music in a score combining free jazz, bebop, modal, traditional and Ellington-inspired pieces. He has also extensively researched the music of Jelly Roll Morton, an influence that emerges in his own sound time and time again.

He brings the same passion to his wanderings through the Rosenbach’s holdings, according to librarian Elizabeth Fuller. “Most traditional researchers will have specific questions and be looking for particular evidence,” she says. “Most artists will ask something like, ‘What do you have that says something about loyalty?’ and they can use anything from a poem by Shakespeare to a letter of George Washington’s to a picture of a dog. Dave is somewhere in the middle. He’s very concerned to get the actual historical background, but he also wants to know about the flavor of human experience and relationships. He’s concerned to portray feelings and impressions, but he wants to be sure that they’re founded on facts.”

“He lives the research,” continues violinist Balan, who has been performing with Burrell in various contexts for 14 years. “He really thinks about how to collect all of these emotions that he’s felt while reading the history and do it justice in a piece of music.”

While it would now make perfect sense to add “amateur historian” to Burrell’s resumé, he still manages to get out from behind the library shelves quite a bit. Since releasing the acclaimed trio CD Expansion in 2004, Burrell has enjoyed a flurry of activity. That disc was followed by 2006’s Momentum, which featured music he’d composed for the silent film Body and Soul, directed by the pioneering African-American filmmaker Oscar Micheaux and starring Paul Robeson. He has several recordings in the pipeline now, including a duet recording with Roscoe Mitchell and trio dates with Steve Swell and Michael Formanek and with Tyshawn Sorey and Henry Grimes.

He is also continuing his long-running collaboration with singer Leena Conquest, with whom he’s recorded vocal pieces penned in collaboration with his wife, Monika Larsson. The two were recently invited to perform a pair of Billie Holiday tunes for a French documentary on the singer. “People have told us we should play at the Carlyle,” Burrell says, shaking his head at the thought of playing at the upscale hotel that hosted singer Bobby Short and Woody Allen’s jazz band. “It’s so avant-garde to even think that we belong up there, but it’s good to know that maybe one of these years things will work out that way.”

For now, Burrell will begin to turn his attention to the third year of the Civil War, the year of the Emancipation Proclamation. While the current project has a definite stopping point, Burrell hopes to continue to unearth inspiration from the Rosenbach’s diverse collection. The eclectic arcana has pushed him into new sonic territories, from the African rhythms of “Bill of Sale for a Slave” to the two-step in this year’s “Three-Way Tie,” inspired by the war effort’s fundraising fairs. More than one of the pieces originally created for the Rosenbach commissions has reemerged in new arrangements for his more jazz-oriented ensembles. “Hopefully, by the time we get to the end of my war residency I have been such an asset to the institution that I’m able to do something else,” he says. “Because I like what I’m doing as a composer.”

When you’re on TV, everybody knows you, or at least thinks they know you. Take Kevin Eubanks, who was on NBC’s Tonight Show five nights … END_OF_DOCUMENT_TOKEN_TO_BE_REPLACED

Jimmy Katz leads many lives. He is the preeminent currently active jazz photographer, and has shot more than 200 magazine covers and over 600 recording … END_OF_DOCUMENT_TOKEN_TO_BE_REPLACED

Take a look at Blue Note Records’ release schedule for 2022 and it’s hard to miss the significant percentage of electronic-oriented music. In March, the … END_OF_DOCUMENT_TOKEN_TO_BE_REPLACED