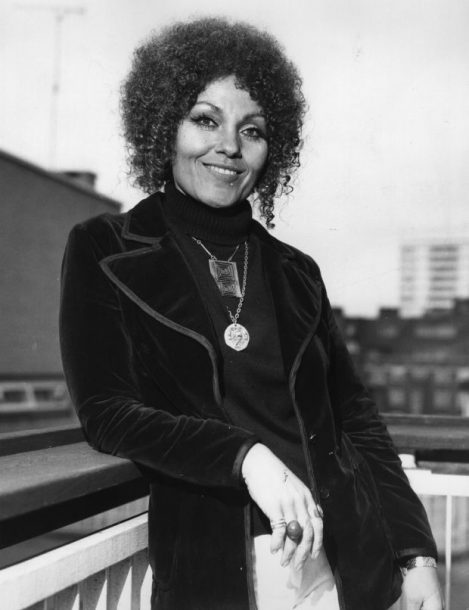 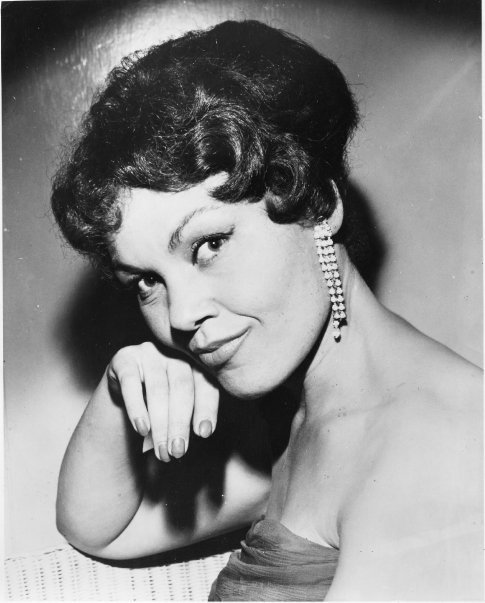 In the 1970s, when Cleo Laine broke through in the States after years of British stardom, she was all over TV: an exotic hothouse flower with an Afro-like headful of floppy curls, a siren’s saucy glance and the loose-limbed, doll-like moves of a marionette. Her luscious, low contralto resounded like a foghorn, and zoomed three and a half octaves into the ether. Singing “On a Clear Day You Can See Forever,” the exuberant ’60s show tune, Laine took listeners on a giddy helium balloon ride. She soared circles around the tune, then leapt up to an ear-popping high G; opera’s greatest coloratura soprano, Joan Sutherland, sang up to high F.

However did she do it? At 88, Laine-now Dame Cleo-chuckles and responds with tongue-in-cheek hauteur: “It may be hahd for you but it wasn’t hahd for me!”

Enraptured critics proclaimed her the world’s greatest singer. Although Laine became known as Britain’s First Lady of Jazz, her versatility knew few bounds; she sang everything from Shakespeare to Bessie Smith, “Perdido” to Stephen Sondheim. In 1971 she played the biracial Julie in a landmark London revival of Show Boat. Laine recorded Porgy and Bess with Ray Charles, and earned a Grammy nomination for her version of Schoenberg’s atonal song cycle Pierrot Lunaire. “It was outrageous sometimes,” she says. “I could do anything I wanted.”

In England, Laine is treated as a dowager aristocrat of song. Her career is inseparable from that of her husband and conductor, John Dankworth, the father of British jazz. Audiences loved hearing her scat in unison with his clarinet or alto saxophone; every note was written out by Dankworth and executed with dazzling precision. He was a graceful and deft player, but his ultimate instrument was Laine.

In 2010, Sir John died. That October, Laine made her last U.S. appearances in San Francisco, joined by her daughter, the actress and singer Jacqui Dankworth. These days, following a knee replacement and a fall that cracked her femur, Laine is off the road, probably for good. “I can’t walk very easily without crutches,” she says. “But the voice remains.”

And Laine-earthy, droll and tough-still wields it with pride. She spoke to me by phone from her 19th-century Gothic home in the village of Buckinghamshire, 50 miles north of London. The house shares a 17-acre estate with the Stables, a renowned concert hall that she and John founded in 1969. It’s part of an educational center that, true to the Dankworth mission, unites almost every form of music.

At its heart is a dynasty. Son Alec is a thriving bassist; his daughter Emily sings. Sondheim has praised Jacqui, whose silky, dulcet voice sounds nothing like her mother’s. “If she hadn’t been a good singer I would have hit her with my stick!” jokes Laine.

Laine herself seemed uncategorizable from birth. Clementine Dinah Bullock was born to an unwed white British mother and a black Jamaican father, a frustrated opera singer who wound up busking on the streets of West London, where they lived. “Clemmie” became a sometime child performer; a British reporter noted her “coffee-colored skin, wild fuzzy hair and Cockney accent.” By 1951 Laine had a floundering first marriage and a son, Stuart. Feeling restless, she began auditioning for dance bands. “Nobody seemed to want me at all,” she says.

The Johnny Dankworth Seven, a bebop combo, didn’t want a singer either, but the scuffling group needed to sweeten its appeal. When Dankworth heard Clementine’s crushed-velvet tones, he was “speechless.” He renamed her Cleo Laine. From then on, each fueled the other’s rise. He wrote increasingly tricky arrangements and challenged her to master them. On her own, Laine began scatting along with his horn section. “I was fed up with standing around waiting on the bandstand,” she explains. Later in the ’50s, Annie Ross’ vocal high-flying with Lambert, Hendricks & Ross inspired Laine to follow suit: “It made me say, ‘Puh! I’ll do it too!'” Dankworth egged her on by raising her keys.

Their marriage in 1958 helped make them a grand couple of the arts. Dankworth thrived as an orchestra leader and film composer; Laine sang in cabarets, played character roles in theatre and began a solo recording career. Ross knew the Dankworths well: “They were kind. They were rich.” She laughs. “They had good lives.”

Their partnership flourished in daring ways. In The Servant, a homoerotic classic of British New Wave cinema, hers is the sultry but spooky voice that sings “All Gone,” an inscrutable torch song by Dankworth and Harold Pinter, as madness descends upon a house in London. On an album scored by John, she and Ross give a swinging recitation of Façade, Edith Sitwell’s tongue-twisting suite of nonsense poetry.

A zenith came in 1964, on the occasion of William Shakespeare’s 400th birthday. Inspired in part by Maxine Sullivan, who had recorded a few jazzy Shakespeare settings, Dankworth rounded up some sonnets and poetic passages from the plays. (They were easy to spot, he said, “because the typography changes.”) He set them to sprightly, elegant pop-jazz. The resultant album, Shakespeare and All That Jazz, became a connoisseur’s delight in England. Laine was to the manner born: aristocratic, witty, dramatic and quintessentially British. In DownBeat, Don Nelsen called the experiment “one of the most satisfying jazz vocal albums I have ever heard.” From there the couple took on Auden, T.S. Eliot, e.e. cummings and other poets, and expanded Shakespeare into a double album, Wordsongs.

It’s no wonder that in England, Laine says, “they used to call me Arty Laine.” But not even five stars in DownBeat had made her eager to conquer America. “There were lots of wonderful singers over there,” she says. “Why hire me?”

Dankworth saw possibilities though, and pursued them fervently. In 1972 Laine and Dankworth’s quartet played Alice Tully Hall in New York. Few came, but the Times published a rave. The next year the couple gambled on Carnegie Hall, and a critical explosion greeted them: How could this treasure, age 45, have been tucked away for so long? Time and Newsweek devoted euphoric pages to the singer. Laine was now an international star. RCA signed her, and on the albums that followed she and John crossed genres ever more aggressively. In America, Dankworth became known as his wife’s instrumental sidekick, a sometimes frustrating role. “Maybe we need a musical divorce,” he once said.

It never happened, but he maintained control. “John was really magnificent as a bandleader,” says Larry Dunlap, their American pianist beginning in 1982. “Pretty much everything was left up to him. He knew exactly what he wanted. He would coach Cleo on how he wanted her to sing a song.” But Laine achieved wonders without him. In 1985 she played Princess Puffer, the opium den mother, in the Dickensian Broadway hit The Mystery of Edwin Drood, and scored a Tony nomination. Two years later, on her album Cleo Sings Sondheim, she swung the composer’s almost unswingable work and acted it like a theatrical grande dame. “A lot of people think it brought his songs to life for the first time!” Laine asserts.

The nonstop activity continued even in 2007, when both Dankworths turned 80. Around then Laine asked Dankworth, in a cockney bray, “How much longer do you think these old bodies are going to hold out?” Soon after, liver troubles, perhaps genetic-he never drank much-plunged the recently knighted Sir John into failing health. On Feb. 6, 2010, hours before a Stables anniversary concert, he died. Stoically, Laine insisted the show go on. She sang the tender setting of Shakespeare’s “Shall I Compare Thee to a Summer’s Day?” that John had written for her. At the evening’s end she calmly announced his death. “Everyone thinks I was very brave,” she told the BBC. “I wasn’t brave. It had to be done. It was something I knew he would have done for me if the boot had been on the other foot.”

Laine soldiers on, keeping a hand in the Stables and performing when she wishes. How does it feel to sing without John beside her? “Well … it’s not easy,” she answers wistfully. “We were joined at the hip. We would always sit and talk about how things were going to be done. I miss all that.” But she doesn’t plan to stop. Singing, Laine admits, is “the one thing that keeps me going, really.”

When you’re on TV, everybody knows you, or at least thinks they know you. Take Kevin Eubanks, who was on NBC’s Tonight Show five nights … END_OF_DOCUMENT_TOKEN_TO_BE_REPLACED

Jimmy Katz leads many lives. He is the preeminent currently active jazz photographer, and has shot more than 200 magazine covers and over 600 recording … END_OF_DOCUMENT_TOKEN_TO_BE_REPLACED

Take a look at Blue Note Records’ release schedule for 2022 and it’s hard to miss the significant percentage of electronic-oriented music. In March, the … END_OF_DOCUMENT_TOKEN_TO_BE_REPLACED

Those who are only familiar with bassist Martin Wind’s jazz credentials—both as a leader and as a first-call sideman for Bill Mays, Dena DeRose, Ken … END_OF_DOCUMENT_TOKEN_TO_BE_REPLACED