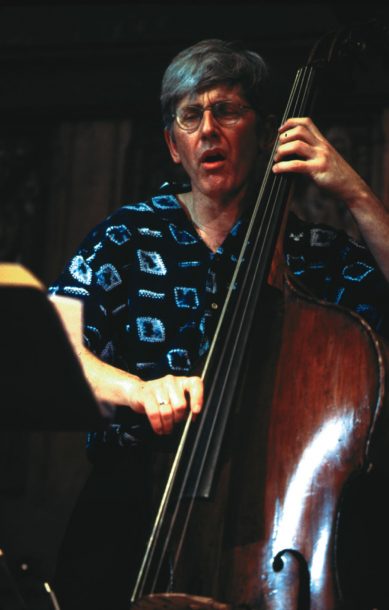 Mark Dresser’s instrumental daring and forward-looking music have been a matter of record since he launched his career in the 1970s, both as a solo artist and as a key collaborator in the bands of Anthony Braxton, John Zorn, Ray Anderson, Anthony Davis and other likeminded mavericks. In recent years, his artistic vision has taken on a new thrust with his Telematic concerts. Using advanced fiber-optics technology, these concerts feature him improvising, in virtually real time, with musicians in other cities around the world, in front of audiences that can hear and see the performers in each locale, some in person and some via video.

His role as a pioneer in Telematics bears rich fruit on Nourishments, the Mark Dresser Quintet’s splendid recent album. By turns edgy and lilting, it teams him with a frontline of saxophonist Rudresh Mahanthappa and trombonist Michael Dessen plus Denman Maroney on “hyperpiano” (an über-prepared piano). The seven-song album features several compositions Dresser and Dessen developed together via Telematics. “With Telematics, for the first time, I can be in San Diego and play with people-in other parts of the world-interested in the same general genre of jazz and improvised music as me,” Dresser says.

“Mark is an unparalleled musician,” says Mahanthappa, who is also one of Dresser’s bandmates in the genre-shredding trio Mauger. “He is a virtuosic master of his instrument, a prolific and innovative composer, a forward-thinking technologist with regard to both his implementation of electronics on his instrument and his Telematic work, and he is a sensitive and insightful collaborator.”

“Mark is a giant,” agrees trumpeter Dave Douglas, another of Dresser’s many musical partners. “He’s a volcanic force on the bass, and what he does is subtle and perceptual. He can always find the magic in any musical situation.”

“My goals now are a little more specific than when I started,” says Dresser, who teaches at the University of California at San Diego (UCSD), his alma mater. “But generally my goal is to make a contribution of some sort, to be able to survive and thrive, and to give something back.”

To read the rest of this story, purchase the issue in print or from the Apple Newsstand. Print and digital subscriptions are also available.
Recommended Listening

When you’re on TV, everybody knows you, or at least thinks they know you. Take Kevin Eubanks, who was on NBC’s Tonight Show five nights … END_OF_DOCUMENT_TOKEN_TO_BE_REPLACED

Jimmy Katz leads many lives. He is the preeminent currently active jazz photographer, and has shot more than 200 magazine covers and over 600 recording … END_OF_DOCUMENT_TOKEN_TO_BE_REPLACED

Take a look at Blue Note Records’ release schedule for 2022 and it’s hard to miss the significant percentage of electronic-oriented music. In March, the … END_OF_DOCUMENT_TOKEN_TO_BE_REPLACED