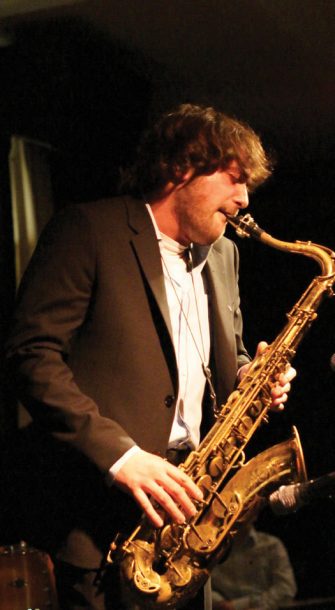 “I met Greg Osby,” recounts Noah Preminger, “and he told me, ‘I can’t figure out who you sound like.’ That’s maybe the nicest thing anyone’s ever said to me.” The anecdote is telling. Osby witnessed firsthand the Young Lion era-that ’80s moment when so many high-profile young players mined jazz history to the point of mimicry. Tenor saxophonist Preminger is clearly focused on being himself.

The 24-year-old’s pedigree is similar to that of many notable jazz musicians his age. He attended a big-time jazz college, New England Conservatory, and before that, a big-time jazz high school. Given such a background, and the reputation jazz schools have-deserved or not-for turning out technically proficient automatons, it might seem remarkable that Preminger has developed such an individual conception. But then you meet him, and hear him talk about his passion for boxing-he recently took up the sport-or his tongue-in-cheek fantasy about being a sniper-assassin for the CIA. Asked what he might’ve been had he not become a jazz musician, he says, “A ski bum, maybe,” which isn’t hard to imagine, given his casual good looks and confident, friendly manner. Preminger is clearly disinclined to do what’s expected of him. When he says, “I’m not a school person,” it seems totally in character.

He’s no slacker, however, and he didn’t become the precise, lyrical player he is by accident. Preminger possesses great technique that he employs judiciously in a number of formats, from standards to the avant-garde. As his sometime drummer Ted Poor says, Preminger plays “with a lot of intensity, but that intensity comes from restraint and use of space.”

Pianist Frank Kimbrough played on both of Preminger’s albums: His debut, Dry Bridge Road, on the Nowt label, and his current release, Before the Rain, for Palmetto. Kimbrough admires Preminger’s ability to balance plan and happenstance. “He thinks pragmatically-always prepared, but not too much,” he says. According to Preminger’s bassist John Hébert, age and experience aren’t the issues. “He has an old soul,” says Hébert, “and playing with soul is what it is all about. He has that.”

Asked about his personal history, Preminger says drily, “I don’t really have a story … as in, I wasn’t found living amongst the wolves.” But there should be at the very least a prosaic accounting, and it goes something like this: Noah Preminger spent his childhood in Canton, Conn. Neither parent was a musician-his father owns a landscaping business, his mother is a social worker-but both were inordinately hip to jazz. His love and talent for the music were apparent early on, and by age 12 he was studying with Dave Liebman. His supportive folks eventually moved the family to West Hartford, Conn., so Noah could attend Hall High School, well-known for its top-flight jazz program led by saxophonist John Mastroianni. (Notable alumni include pianist Brad Mehldau, percussionist Richie Barshay and saxophonist Joel Frahm.)

After high school, Preminger attended NEC. One of his teachers was the trumpeter John McNeil, who took Preminger under his wing. After Preminger moved to New York, the resident Brooklynite helped him break onto the scene and urged him to record. Dry Bridge Road-produced by McNeil-was a critical success, winning the Best Debut category in the 2008 Village Voice Jazz Critics’ Poll. Preminger has since become a presence on the NYC jazz circuit, most often leading his own band, which has included, at various times, Kimbrough, Hébert, guitarist Ben Monder and, on drums, either Poor or Matt Wilson.

Before the Rain is essentially an all-ballads album, but it’s also more than that. The repertoire and approaches are subtly varied, the constant being a near-obsessive respect for melody. It includes standards-“Where or When,” “Until the Real Thing Comes Along”-rubato free play (including a cover of Ornette Coleman’s “Toy Dance”) and ambiguous, Latin-flavored groove, played in a deceptively quiet, contemplative manner.

The sidemen (Kimbrough, Hébert and Wilson) are simpatico; Kimbrough is especially well-chosen, his innate melodicism well-matched to Preminger’s oft-times deliberate, spacious style. Preminger takes established forms and concepts and uses them in unusual ways, resulting in unique and-perhaps surprisingly, given the music’s intellectual heft-accessible statements. Without compromising, Preminger could attract an audience wider than the small circle of jazz aficionados.

He only has to be himself. As Kimbrough explains it, “I’ve always been attracted to outlaws, those who have the conviction to do what they need to do, and not care what anyone thinks. Noah has just enough of an outlaw streak in him to keep things interesting.”

“I can’t imagine sounding like anyone else,” Preminger adds. “If you can’t be original, what’s the point?”

Guitarist Will Bernard bears the bittersweet blessing of virtuosic skill and eclectic taste, making his music a perpetual delight and yet hard to categorize. Maybe … END_OF_DOCUMENT_TOKEN_TO_BE_REPLACED

At 95, Chicago-based guitarist George Freeman is among the world’s oldest active jazz musicians. Although he came of musical age in the 1940s and counts … END_OF_DOCUMENT_TOKEN_TO_BE_REPLACED

When you’re on TV, everybody knows you, or at least thinks they know you. Take Kevin Eubanks, who was on NBC’s Tonight Show five nights … END_OF_DOCUMENT_TOKEN_TO_BE_REPLACED