Skip to content
Become a member and get exclusive access to articles, live sessions and more!
Start Your Free Trial
Home > Features > Nir Felder: Putting Musical Storytelling Ahead of Chops 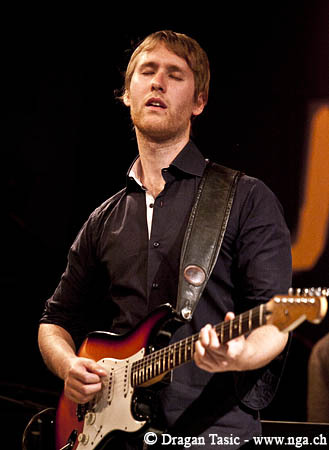 It’s 1995, you’re 13 and you’re saving allowance money for two weeks just to buy a guitar magazine,” says Nir Felder, sitting in the army green music studio of his Park Slope, Brooklyn, walkup. “You read all these names but you can’t actually hear the people, which makes you think, ‘What did Big Bill Broonzy sound like?’ So then you try to play something you’ve never heard before. It’s the same when you compose: You’re using your imagination to approximate an idea.”

The 30-year-old guitarist talks like he plays, stacking rhythmic phrases that have a way of whirling back to where they began. Felder’s recently released debut album, Golden Age (OKeh), moves in similar fashion. The first track opens with a sample of Bill Clinton saying, “Thank you very much”-a greeting or a farewell? Is this the beginning or the end? Sixty minutes later, like a clock, Golden Age closes full circle: The last chords reprise the first, this time with an overdub by Hillary Clinton (“There is one message…”) that swirls to crescendo until Adlai Stevenson tolls, “The American Dream has ended.”

“When this music was written, things looked inspiring and bleak at the same time,” says Felder. “So the album deals with ambiguity, with the fantasy of a golden age but also with the reality of it. Is it something we look for in the future or back to in the past? Did it ever exist? Is this one? And according to whom? It’s more of a question than a statement.”

Which isn’t the usual debut M.O. Instead of a show-and-tell, Felder and his bandmates-Aaron Parks (piano), Matt Penman (bass) and Nate Smith (drums)-are more inclined toward collective storytelling. “I chose them because they’re all players who put the song ahead of their own virtuosity,” says Felder. That pays off in Felder’s compositions, where narrative and texture overtake jazz’s familiar head-solos-head routine.

Raised in Katonah, N.Y., Felder is a first-generation American of Israeli descent. His grandmother, who grew up strumming guitar at hootenannies in the rural Galilee, seems to have imparted a down-home, no-frills ethos: Felder’s first guitar, a Mexican Stratocaster purchased for $250 when he was 13, remains his go-to. (At age 85, Rina Ben-Yehuda continues her work as a physical therapist; among her clients was the late Paul Motian.) “Jazz is one part high art, one part folk art,” he says, “and I don’t know how much sense it makes to make folk art on a $15,000 instrument.”

Felder moved to New York City after graduating from the Berklee College of Music in 2005. “I had no expectations,” he says, “so over the last eight years, I’ve played every kind of gig imaginable-like stuff I wouldn’t even want to tell you about.” Cutting his teeth as a sideman for Greg Osby, Jack DeJohnette, Esperanza Spalding, David Weiss and Point of Departure and Eric Harland’s Voyager, Felder has since come into his own, conducting a protean 12-month residency at Manhattan’s 55 Bar as well as leading his two bands, Nir Felder 4 and Big Heat. Last September, the drummer Peter Erskine enlisted Felder to play for Anna Nicole, the last production of the New York City Opera. “He’s kind of a chameleon,” says Parks. “But from the beginning, Nir’s sound was something that grabbed me as pretty special. Sometimes he plays really long strings of notes, with all these twists and turns in the way the melody unfolds. Other times, he’ll leave a lot of space and just create a sound world.”

Since Golden Age was recorded in September 2011, the guitarist has sifted through hours of historic speeches, layering choice fragments from Mario Cuomo, Elie Wiesel, Richard Nixon, Barbara Jordan, Lou Gehrig, Malcolm X and others into the mix. The result is more than found art; it’s a postmodern mashup of music and history, an archive that sings. “This is not the Wall Street Journal,” Felder explains. “This is fiction: Interpret it as you wish.”

If Golden Age sounds like a generation’s attempt to make sense of multimedia overload, it also evokes Felder’s notion of music as a sort of inkblot test. “As an artist, it’s my job to go out there and absorb everything I can so that when someone comes to hear me play, something clicks for them,” says Felder. “So you practice and play and travel and read, and these tastes, these smells, ideas, feelings, whatever-all the things that can’t be spoken, the big and the small-it all becomes a part of you. And then you try to tell that story.”

When you’re on TV, everybody knows you, or at least thinks they know you. Take Kevin Eubanks, who was on NBC’s Tonight Show five nights … END_OF_DOCUMENT_TOKEN_TO_BE_REPLACED

Jimmy Katz leads many lives. He is the preeminent currently active jazz photographer, and has shot more than 200 magazine covers and over 600 recording … END_OF_DOCUMENT_TOKEN_TO_BE_REPLACED

Take a look at Blue Note Records’ release schedule for 2022 and it’s hard to miss the significant percentage of electronic-oriented music. In March, the … END_OF_DOCUMENT_TOKEN_TO_BE_REPLACED