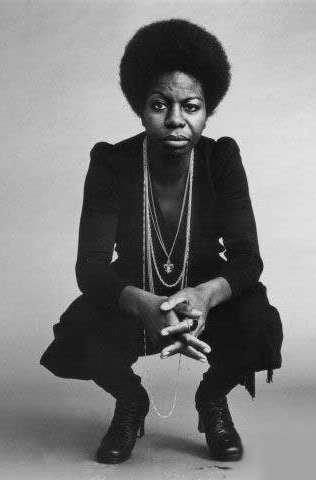 Comparisons in music are often frivolous, but with Nina Simone they bend toward the absurd. Simone, Aretha Franklin and Billie Holiday are probably the most revered female American musicians of the 20th century. Of that trio, Simone is the least easily imitated and the hardest act to follow as a self-possessed artist. Reckon with her as a popular and unrepentant political singer and she clearly occupies an even more rarefied category—one where Bob Dylan and Bob Marley are her only contemporaries.

We’re said to be going through something of a Simone Renaissance now, given the harrowing documentary about her life currently streaming on Netflix and the tribute album, Nina Revisited: A Tribute to Nina Simone (Revive/RCA), produced to accompany it. There is also, twisting in the wings, a narrative film that many hoped would never see the light of day, starring an ill-cast Zoe Saldana in what publicity stills reveal as bad wigs, insulting dental prostheses and blackface cosmetics.

The flurry of market and media fodder has surely caused an uptick in Simone downloads, streaming service visits and millennial visibility. But Simone’s legend hadn’t faded from view in the years before (or since) she died in 2003—not among the hippest of the hip-hop generation anyway. Among cognoscenti of the Soulquarian crew (consisting of Questlove, Bilal, Mos Def, Erykah Badu, Talib Kweli, Common, D’Angelo and others), not knowing Simone would have been enough to get your cool card snatched in the 1990s. And “The Queen of Hip-Hop Soul,” Mary J. Blige, was actually the first name one heard tossed about as the possible lead in a Simone drama. The Simone legacy has steadily maintained since her ’70s heyday as a thing of major currency and recorded fact, more readily accessible now than ever, to anyone with YouTube access and iTunes or Spotify accounts.

What makes that legacy so sui generis is a testament to not only the artistry but also the personality of the artist herself. The two coil into one another like the ancient ouroboros. The extracurricular lives of most rock stars usually generate 15 minutes of topical zing before becoming banal, one crop of who’s-zooming-who replaced by the next. Simone’s life offstage remains historically notable not because of who she dated but for the intellectual civil rights circle she was a part of: Lorraine Hansberry, Rev. Dr. Martin Luther King Jr., James Baldwin, Stokely Carmichael, H. Rap Brown, Amiri Baraka.

The fact that Simone made statements in her art and press junkets as sharp, radical and provocative as any of her activist and literary compatriots further disables easy comparisons to anyone on the present-day scene. Her 1964 release of “Mississippi Goddam” was far more career-threatening for a concert and cabaret star of that time than N.W.A’s “Fuck tha Police” was for a gang-glamorizing rap group in the late 1980s. (Hard to imagine anyone in today’s corporate rap or R&B environment being as overt and unambiguous in their attack on racist authority—however much we applaud the more oblique underscoring of Black Lives Matter by J. Cole, Run the Jewels, D’Angelo and Kendrick Lamar.)

Never mind the badassedness, though. The paradox of Simone is that you don’t need to know anything about her politics to have her sound rock the hell out of you: The gutsy and witty shows of blues feeling the woman laid down in her studio and live-album balladry stand as the high bar which Lauryn Hill, Jill Scott, Blige, Badu, Amy Winehouse and Adele have aspired to, in terms of intimacy, unbridled expressivity and musicality.

Of that bevy, Hill remains The One many still hold out hope for as Simone’s hip-hop-generation heir apparent (even if that isn’t exactly a crowded field). The 17 years since Hill’s lone studio album haven’t dimmed any optimism, as evidenced by her ongoing success as an international touring artist. Through her six appearances on the recent 16-song Nina Revisited album, which she coproduced with Robert Glasper, Hill proves that she certainly has the presence, indomitability and musicality to bring new life to cherished items in the Simone songbook. She’s not alone in that regard, however.

For this Gotham-centric critic, however, the women upholding Simone’s rabblerousing example as feminist-artist-activists are veteran New Yorkers and some of the best-kept secrets of contemporary American vocal music. Topping that list would be singer-songwriter-organizer Toshi Reagon, who has two features on Ndegeocello’s Dedication. A D.C. native, Reagon is civil-rights-movement royalty. Her mother, Dr. Bernice Johnson Reagon, founded the legendary womanist a cappella group Sweet Honey in the Rock, and began her career as a political artist with SNCC and the student-led Freedom Riders movement in the 1960s. Since 1990 Reagon has released close to a dozen solo albums; live, her band BIGLovely splits the difference between the electroacoustic side of Led Zeppelin and the great American folk tradition. Reagon annually convenes Word, Rock, & Sword, a weeklong festival of committed women artists that spotlights veterans of renown, like Nona Hendryx, Judith Casselberry, Martha Redbone and Morley Kamen, and emergent talents of more recent vintage.

Prominent among those are two exceptional singer-songwriter-musicians, Imani Uzuri and Tamar-kali. Both have collaborated in a big-band program of Simone’s works presented by the Black Rock Coalition Orchestra. (Full disclosure requires I tell you the BRC was founded by Living Colour guitarist Vernon Reid and this writer, among others, in 1985.) The all-women version of the BRC Orchestra currently dedicates itself to the compositions of black women songwriters, and has toured France every summer since 2012.

Tamar-kali is the music director of a group that includes Atlanta-based funk chanteuse Joi Gilliam and former Prince guitarist Kat Dyson. Tamar-kali’s own music is a rocking amalgam of styles she describes as “Geechee Goddess Hardcore Warrior Soul,” and can be heard to quite devastating effect on her 2010 album Black Bottom. A former CBGB slam-dancer, Catholic church chorale fugitive and Fishbone background vocalist, Kali’s extraordinary voice, like Simone’s, cuts to the listener’s marrow with original songs that don’t shy from tough topics: depression, overturning patriarchy and fighting the entrenched police-state powers that be.

Imani Uzuri is another powerhouse who has been aligning her voice with the struggle around gender-choice justice since her college days in the Bay Area. She has also shared stages, TV appearances and recordings with Herbie Hancock, John Legend and the Roots, among others. Both of her self-released solo albums, Her Holy Water: A Black Girl’s Rock Opera (2008) and The Gypsy Diaries (2012), demand serious attention.

Uzuri’s free-ranging aesthetic hybridizes the soothsaying and truth-telling Simone (and Odetta) dealt in with rhythmic structures that borrow U.K. drum-and-bass and breakbeat stylings. Her thematic repertoire embraces domestic violence via Greek mythology, postpartum-rooted bipolar disorder, indigenous tribal extinction and the vagaries of poly-amorous romance. The vocalist can also be found on Vimeo rendering a superb “Fodder on Her Wings” with the Black Rock Coalition Orchestra. From within the realm of the jazz-chanteuse proper we see Cassandra Wilson, Cécile McLorin Salvant and Queen Esther upholding Simone’s daring interpretive instincts-locating obscure or forgotten material that can lyrically bedevil and bewitch modern sensibilities.

All of these disciples prove that no artist better emphasized, in life or song, how political the personal can become than Nina Simone. Her global reputation continues to demonstrate the impact popular artists can have when they fearlessly unveil their principled cries for social and emotional justice.

Tenor saxophonist Julieta Eugenio was recently reminded of the distinct pleasure one can derive from masters of her chosen instrument. While cooking at home and … END_OF_DOCUMENT_TOKEN_TO_BE_REPLACED

Everything about Israeli-born tenor and soprano saxophonist Eli Degibri is a celebration. You can hear that in his sideman gigs with Herbie Hancock and Al … END_OF_DOCUMENT_TOKEN_TO_BE_REPLACED

It’s a cold March Friday night in New York City, but the crowd inside the Village Vanguard crackles with warmth as it engages with the … END_OF_DOCUMENT_TOKEN_TO_BE_REPLACED

When you hear tenor saxophonist Mark Turner’s name in conversation, it seems to be frequently linked to the notions of mindfulness, precision, and fastidiousness. “That … END_OF_DOCUMENT_TOKEN_TO_BE_REPLACED