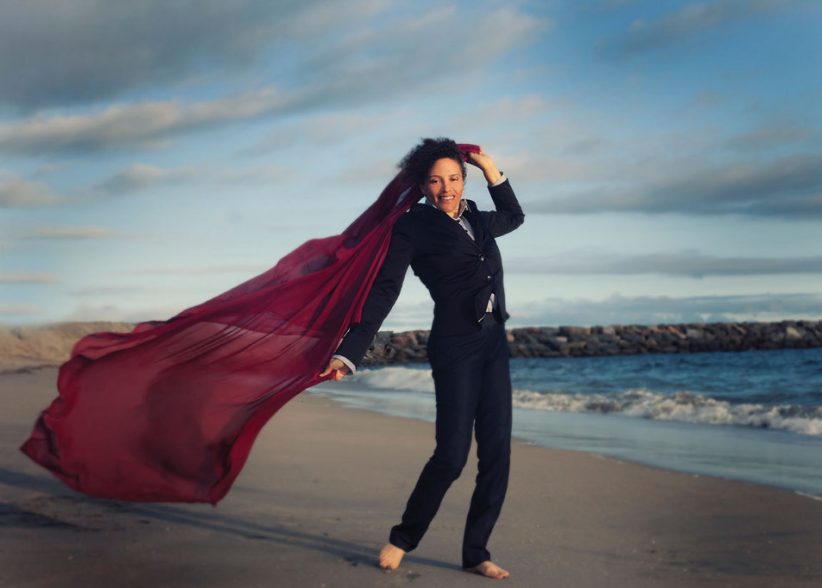 Nicole Mitchell near her home in Long Beach, Calif., May 2012 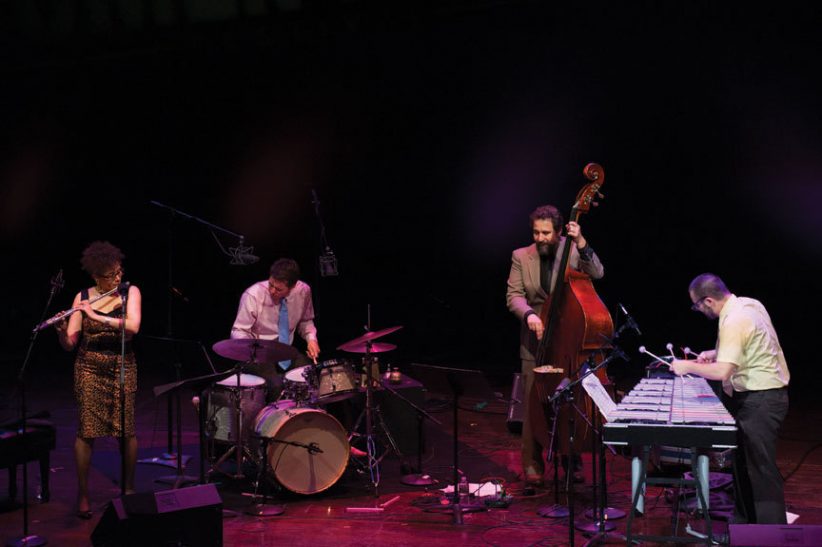 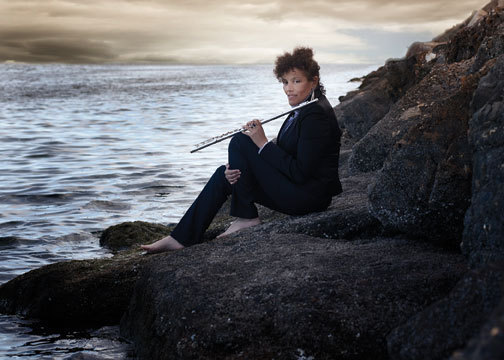 Nicole Mitchell near her home in Long Beach, Calif., May 2012

“Can you take our picture?” Nicole Mitchell asks me.

We are in the Grand Foyer of the Kennedy Center for the Performing Arts in Washington, D.C., in May. Mitchell has just played the final night of this year’s Mary Lou Williams Women in Jazz Festival with her Ice Crystal quartet, performing music from their recent CD, Aquarius (Delmark). Now, she and her husband, Calvin Gantt, are suddenly tourists exploring a famous landmark. Just a few paces from the giant bust of John F. Kennedy, and surrounded by the low bustle of well-groomed patrons filing into the Opera House, the flutist and composer-still in the burgundy blazer and leopard-print dress she wore onstage-hands me her smartphone. She then takes Gantt by the arm and they stand against the polished marble wall. Both put on giddy smiles.

It’s disarming. Mitchell is associated with Chicago’s avant-garde jazz and creative music scene; such musicians are expected to be either academic types or unreachably eccentric. But this couple is funny, humble and thoroughly charming. At the moment, they’re also flushed with excitement at seeing one of the nation’s premier arts venues.

Mitchell is not frivolous, however, especially when it comes to her music. She is a virtuoso flutist, so dedicated that she played on San Diego’s streets in order to pay-often in change-for flute lessons from James Newton. After she transferred from UCSD to Oberlin Conservatory, a professor there recommended she drop the flute, so she dropped the school instead and went to Chicago, where she became one of the scene’s most important players. (“Niki’s a star here!” says vibraphonist Jason Adasiewicz, Mitchell’s frontline partner in Ice Crystal.) Her command of the ax is now on unfettered display: Along with Aquarius, Mitchell has just released Engraved in the Wind (RogueArt), her first solo flute recording.

Recently, though, her efforts as a composer have overshadowed even her flute playing, and this writing includes both the tunes her bands perform and long-form, large-scale works like Arc of O-a six-movement piece for 15 musicians, premiered in Chicago in 2010 (and released on CD by RogueArt last November)-and When Life’s Door Opens, which she debuted in New York in April.

She’s also been a leader in the musical community, and in the Association for the Advancement of Creative Musicians (AACM), Chicago’s legendary collective of which Mitchell is a former chair and co-chair (with multireedist Douglas R. Ewart). Finally, she is an educator of uncommon accomplishment: In July, Mitchell was granted tenure at the University of California, Irvine, after only two years there.

“I believe Nicole was born with the quality of virtuosity,” says Chicago drummer and percussionist Hamid Drake, a friend and mentor of Mitchell’s. “She needed a vehicle to develop it more, and music happened to be that vehicle. But she was born with a virtuosic mind.”

If Mitchell has become an essential part of the Windy City, the reverse is also true. Born in Syracuse, N.Y., in 1967 and raised in Anaheim, Calif., from age 8, Mitchell had often spent summers and holidays with her maternal grandparents on Chicago’s South Side. It provided a welcome respite from the racism of Orange County. “I felt like I could just disappear in the crowd there,” she says. “I could walk around and have friendly experiences with people. So I always romanticized that when I became an adult I was going to move to Chicago.”

She got her chance in 1990, when she received a grant from the Ford and Mellon Foundations to study Chicago’s house-music culture. “That became the moment,” she says. “I had this opportunity to go there for the summer and I was just like, ‘I’m not leaving!'” On her off hours, Mitchell played on the street as she had in San Diego. It was in that capacity that she met Ewart on a South Side corner. “Her enthusiasm was unbridled,” Ewart recalls. “She was in a more formative period of her work, but her passion certainly came through. … She was pretty resolute from the jump. So I was definitely impressed by that attitude and commitment she displayed.”

Also impressed was Maia, a multi-instrumentalist and singer who was a member of the AACM. Maia sponsored Mitchell’s membership in the organization, and together with guitarist/bassist/keyboardist Shanta, they formed Samana-the AACM’s first all-female band. Already, Mitchell was blazing trails in Chicago’s musical community. “Women performers were making great strides during that time,” says Ewart. “Nicole was another bright spark.”

Several changes followed, including a nine-month “soul searching” excursion to New Orleans and the birth of Mitchell’s daughter, Aayaonealya. But it wasn’t until 1997 that her work took a permanent new direction: Attending a concert by Drake and saxophonist Ken Vandermark at the Velvet Lounge, she met tenor saxophonist David Boykin. They would soon become partners, personally and professionally. “The period of me and David working together was a total renaissance,” says Mitchell. “Maia and Shanta were almost like parent figures, like older siblings-Hamid too. It wasn’t until I met David that I had somebody my age to play music with. … He was probably one of the most encouraging forces. … In terms of developing confidence to do my stuff, David was key.”

For Boykin, encouraging Mitchell’s music was unavoidable. “She was just that much more advanced-more than myself. I felt that I had to really improve to keep up,” he says. “It was that much of a difference in what I was hearing, and what I felt, when I was going around to sessions with other people. She was playing just so much more than anybody else.”

All the same, encouragement eventually gave way to a turf war, resulting in Mitchell forming her own band. “She started bringing in songs, and when we played them Nicole was like, ‘OK, what is this? Is this a collective?'” Boykin remembers. “I said, ‘No. I may play some of your songs sometimes, but it’s my group, for playing my songs.’ And then I suggested to her that she start her own group.”

Mitchell duly started the Black Earth Ensemble in 1998, including in it such Chicago stalwarts as Drake, violinist Samuel “Savoirfaire” Williams, bassist Darius Savage and percussionist Avreeayl Ra. They made their first recording, VisionQuest, in 2001. It didn’t end the turf war; she also enlisted Boykin, then fired him when he didn’t defer to her leadership. It did, however, start Mitchell on the path to becoming a major artist in her own right.

When you’re on TV, everybody knows you, or at least thinks they know you. Take Kevin Eubanks, who was on NBC’s Tonight Show five nights … END_OF_DOCUMENT_TOKEN_TO_BE_REPLACED

Jimmy Katz leads many lives. He is the preeminent currently active jazz photographer, and has shot more than 200 magazine covers and over 600 recording … END_OF_DOCUMENT_TOKEN_TO_BE_REPLACED

Take a look at Blue Note Records’ release schedule for 2022 and it’s hard to miss the significant percentage of electronic-oriented music. In March, the … END_OF_DOCUMENT_TOKEN_TO_BE_REPLACED