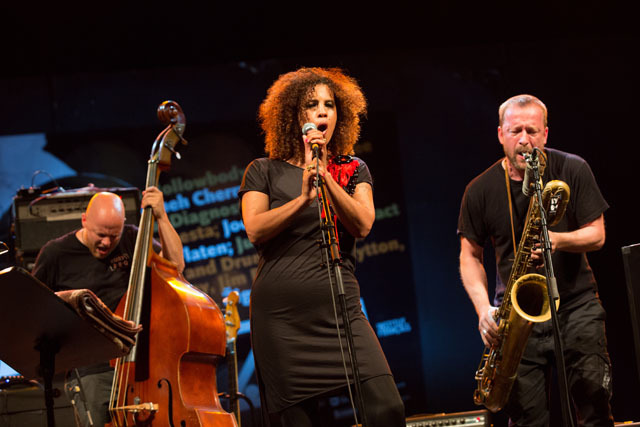 Neneh Cherry and the Thing 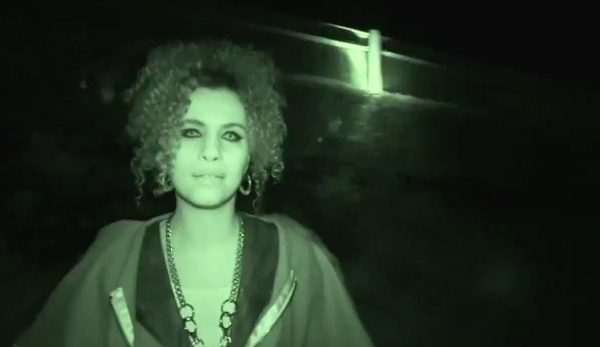 At first glance, it wouldn’t seem like Neneh Cherry and The Thing would have much in common. Cherry is the singer best known for her 1988 hip-hop/dance smash “Buffalo Stance,” while The Thing are the Scandinavian trio best known for their blistering free-jazz eruptions.

But a look at their respective biographies reveals quite a bit of overlap. Cherry and Thing saxophonist Mats Gustafsson, for instance, share a homeland in Sweden. (Gustafsson’s triomates, Ingebrigt Håker Flaten and Paal Nilssen-Love, hail from Norway.) There’s also their common ground in adventurous rock: Cherry started with the British post-punk group Rip Rig + Panic when she was 16, while The Thing have covered the likes of PJ Harvey and the White Stripes, and have conjured squalls of noise with Sonic Youth guitarist Thurston Moore.

And then, of course, there’s Don Cherry. Neneh Cherry’s stepfather was a primary inspiration for The Thing, whose name was taken from the legendary trumpeter’s 1966 album Where Is Brooklyn? “Don is always there,” says Gustafsson, 47, via e-mail. “For us, for Neneh, Don is in the air all the time.”

His influence, direct and indirect, runs throughout The Cherry Thing (Smalltown Supersound), the new collaborative album from Neneh Cherry and The Thing. The project draws material from an eclectic range of sources, including Cherry and Ornette Coleman, proto-punk legends Suicide and The Stooges, and hip-hop eccentric MF Doom. “I think that a lot of people would think of this music as free jazz,” says Cherry, 48, from her home in Stockholm, “but choosing things like Suicide or The Stooges was consciously breaking through the boundaries of how it might be classified. I suppose we’re an eclectic bunch, and we grew up listening to all these things.”

Growing up with Don Cherry, a famous musical omnivore, Neneh was raised listening to virtually everything. She calls the music of Ornette Coleman-whose “What Reason Could I Give?” she sings on this new album-“the lullabies of my youth.” And while for many teenagers joining a punk band would be an act of rebellion, Cherry’s stepfather beat her to it, playing with new-wave singer Ian Dury and taking young Neneh on tour when he opened for the seminal all-female punk band The Slits. “We were so included,” Cherry recalls of her childhood. “The music and the art and life and the family and the journey that my parents were on were a whole. Don had a great understanding of music, but he also had a very playful, childlike approach to it which took him to so many different kinds of music. There were no boundaries and no sense of ‘This is right and that’s wrong.'”

The pairing happened through the urging of mutual friend Conny Charles Lindström, who runs the Stockholm club Strand and cofounded the label Crazy Wisdom with The Thing. Cherry calls the collaboration “a good accident waiting to happen. It feels like it was just hanging there, already decided by the universe, but it took a while to get it together.”

Each member of the group brought in some favorite songs and an original piece (Cherry’s sneering, urgent “Cashback” and Gustafsson’s skulking “Sudden Moment” made the final cut), with loose arrangements hammered out in the studio. The session’s blood pressure is driven upwards by the tension between the songs’ ragged grooves and The Thing’s off-the-leash drive to leap into boisterous improvisations, though Cherry’s steely vocals and rhythmic malleability allow her to hold her own.

Gustafsson shrugs off comparisons between working with Cherry and more easily accommodated collaborators like free-jazzer Joe McPhee. “We haven’t changed our approach to anything,” he insists. “We do The Thing music and Neneh does her thing, and we meet and interact. If we would compromise, the music would suck big time.”

The Cherry Thing is the first release to feature Neneh Cherry’s name on its cover since Man in 1996. In the interim, she’s appeared on releases by artists like Tricky and Gorillaz, and released two albums with cirKus, a family collective featuring husband Cameron McVey and daughter Tyson. She largely abandoned her solo career following Don’s death and is resuming shortly after losing her mother; a full-fledged solo album is also in the works.

The most difficult part of the Cherry Thing session was writing lyrics to her stepfather’s tune “Golden Heart.” The recording features Christer Bothén, a family friend who introduced Don to the doussn’gouni, a Malian hunter’s guitar. “I had the idea to do it almost like a prayer or something you would hear from a mosque in a distant land,” Cherry says. “For years after Don died I was too broken-hearted to even listen to his music, so that’s another reason for this particular journey. I really got to a place where I can celebrate him, to recognize who I am because of the upbringing that I had and to take it into my own thing. It’s kind of a deep journey.”

Guitarist Will Bernard bears the bittersweet blessing of virtuosic skill and eclectic taste, making his music a perpetual delight and yet hard to categorize. Maybe … END_OF_DOCUMENT_TOKEN_TO_BE_REPLACED

At 95, Chicago-based guitarist George Freeman is among the world’s oldest active jazz musicians. Although he came of musical age in the 1940s and counts … END_OF_DOCUMENT_TOKEN_TO_BE_REPLACED

When you’re on TV, everybody knows you, or at least thinks they know you. Take Kevin Eubanks, who was on NBC’s Tonight Show five nights … END_OF_DOCUMENT_TOKEN_TO_BE_REPLACED