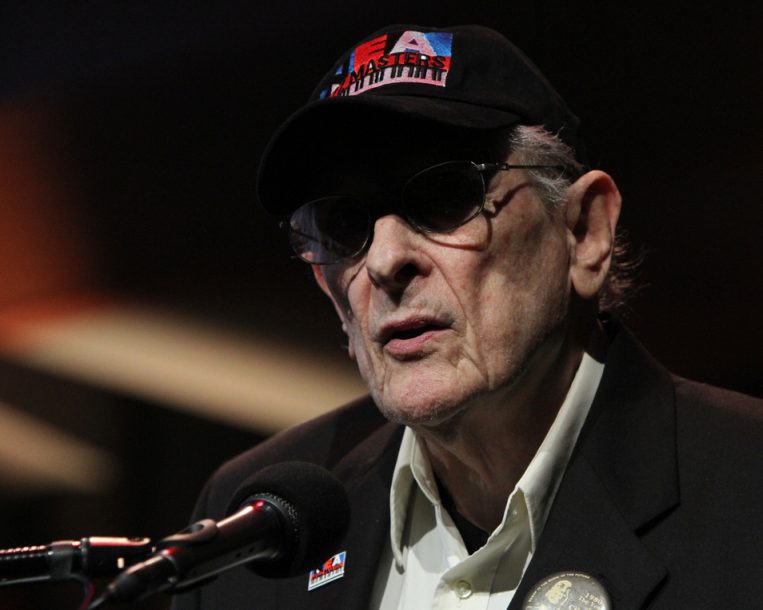 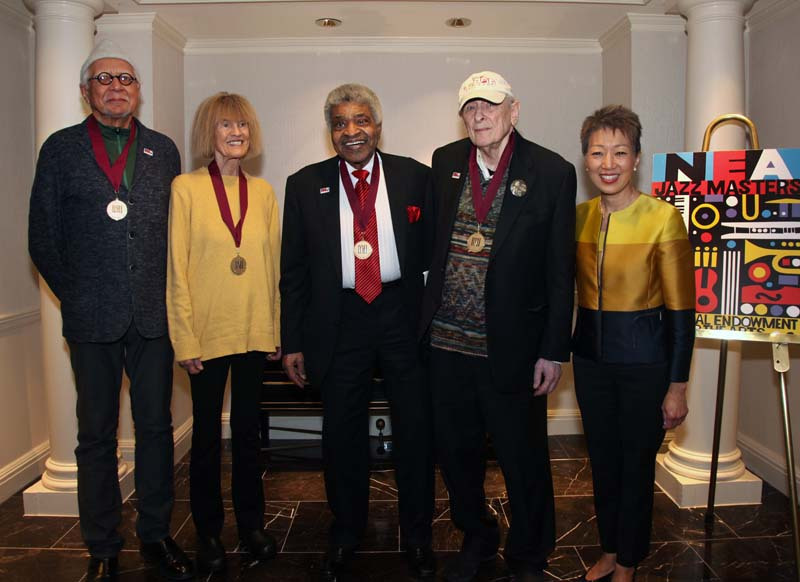 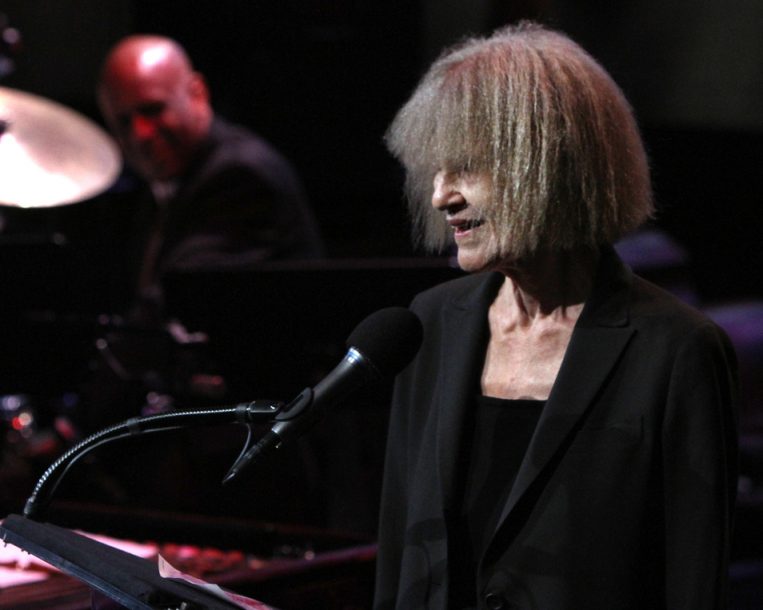 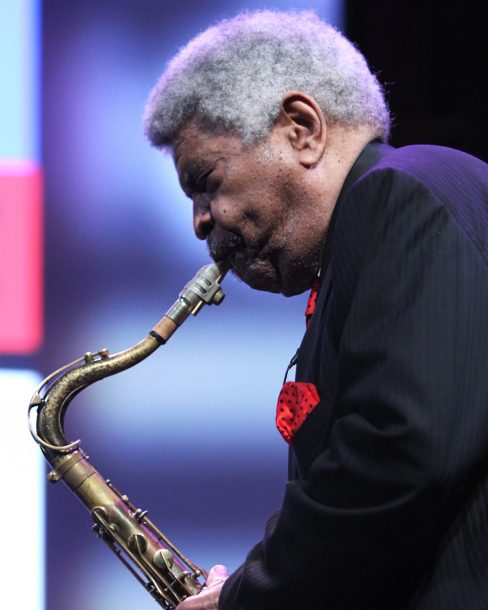 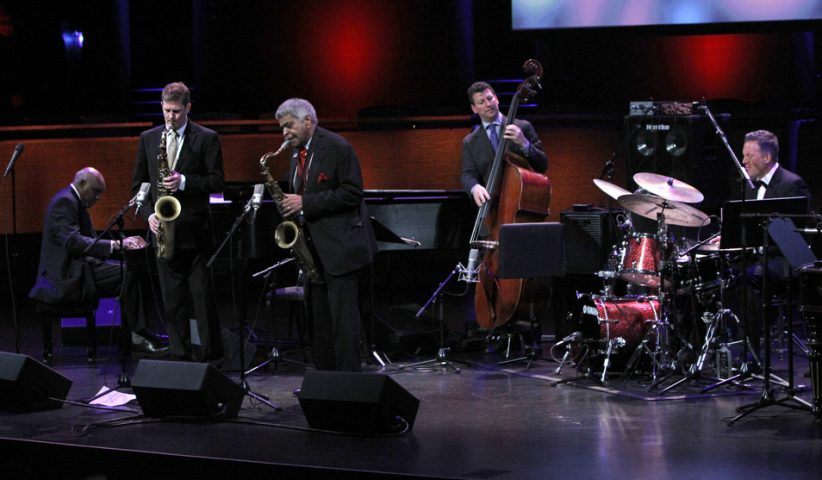 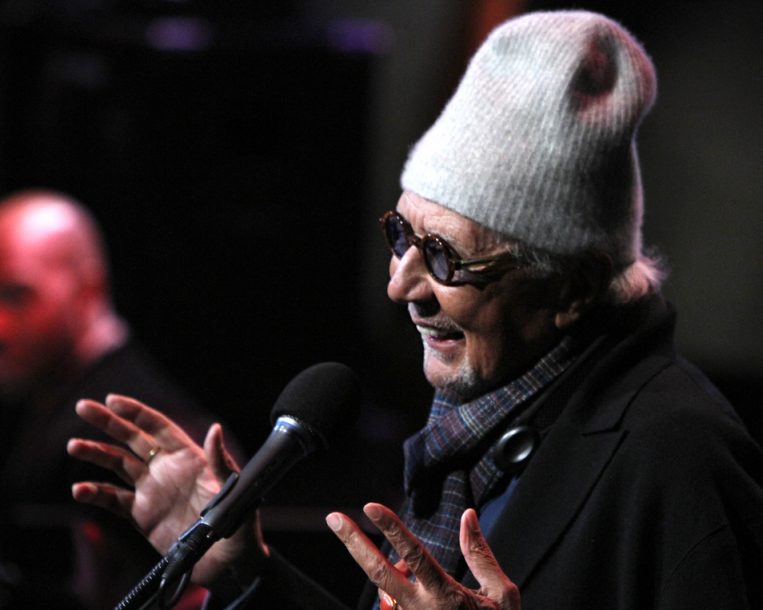 The 2015 NEA Jazz Masters Awards Ceremony and Concert, held Monday, April 20, at Jazz at Lincoln Center’s Rose Theater in New York, was, as big-institution presentations go, a nearly painless experience. Honoring Carla Bley, 79; George Coleman, 80; Charles Lloyd, 77; and Chicago club owner Joe Segal, 89, it was fun, and moving, and its two-hours-plus runtime seemed neither too brief nor too long. That first sentence might seem cynical-how could an all-star jazz confab be trying?-but as awards shows on network TV keep proving, just because an organization has a lot of resources doesn’t mean it knows how to utilize them. The host at Rose, bassist and broadcaster Christian McBride, was pitch-perfect, and the speeches, including introductions by other NEA Jazz Masters, were mostly prewritten, which meant they didn’t ramble. The video presentation for each awardee was meaningful and reflective of a real budget.

The occasion merited such savvy and professionalism. The Jazz Masters Fellowship, which the NEA initiated in 1982, is accurately touted as the nation’s highest honor in jazz. It comes with a one-time stipend of $25,000, and is viewed as entry into a hall-of-fame for the music. In recent years the number of annual Masters has been pared down to three musicians plus a non-player recipient of the A.B. Spellman Award for Jazz Advocacy. Still, it’s a coup for jazz in 2015, when any new information about public arts funding is too often a tale of woe.

JALC Artistic Director Wynton Marsalis turned up to speak on behalf of the ceremony’s facilitators, before Latin-jazz eminence Eddie Palmieri introduced Carla Bley, haltingly but kindly. In her speech and video clip, Bley spoke about her romantically humble beginnings, working in the coat room and as a cigarette girl in New York jazz clubs, and how musicians like Paul Bley and Steve Swallow have changed her life’s course. With saxophonist Tony Malaby, electric bassist Swallow and drummer Billy Drummond she performed her “Ups and Downs,” a swinging midtempo tune with a skewed, Monk-like blues sense. Malaby, one of New York’s most dependably engaging avant-gardists, looked and sounded confident on the JALC stage, calling to mind an openhearted mainstream tenorman like Joe Lovano.

Saxophonist Lou Donaldson, jazz’s best living raconteur, introduced his pal and fellow saxophonist George Coleman, “the refugee from Tennessee,” as he called him. Donaldson delivered-one of the few, if only, speakers not to require a teleprompter-though a roundabout boxing anecdote lacked his typical pithy hilarity. Onscreen and onstage Coleman discussed his formative blues and R&B experience, which he put to burning use in a band with a cadre of hard-swing torchbearers who call the uptown New York club Smoke their clubhouse: saxophonist Eric Alexander, bassist John Webber, drummer Joe Farnsworth and pianist Harold Mabern, still levitating through his solos at age 79.

After an affecting tribute to late Jazz Masters by A.B. Spellman, vocalist Cécile McLorin Salvant commanded the room with a take on “Motherless Child” that moved stealthily from rubato to tempo and allowed her to showcase her striking range. The regal pianist Kenny Barron spoke about Charles Lloyd, who offered insight on his Memphis mentors and profound relationship with percussionist Billy Higgins. (It wasn’t long after Higgins died that Lloyd heard his current drummer, Eric Harland, at the Blue Note. “I knew Billy must have sent him,” Lloyd said.) The saxophonist performed an excerpt from his recent long-form masterwork, Wild Man Dance Suite, with most of the quintet that recorded it-including pianist Gerald Clayton, a more conventionally elegant, lyrical contrast to Jason Moran, who performed the work in Lloyd’s band two nights prior. (See JT Notes, p. 8.)

Joe Segal, proprietor of Chicago’s longstanding mainstream club the Jazz Showcase, was the evening’s final recipient. His advocate, Jimmy Heath, played soprano sax with Drummond, Jazz Master Jimmy Cobb on drums and two members of Windy City jazz royalty: Ira Sullivan on alto sax and Stu Katz on piano. They played “Dewey Square” with a rugged insight that only men raised in the immediate shadow of Charlie Parker can. It was old music in an institutional setting, but it had an edge.

When you’re on TV, everybody knows you, or at least thinks they know you. Take Kevin Eubanks, who was on NBC’s Tonight Show five nights … END_OF_DOCUMENT_TOKEN_TO_BE_REPLACED

Jimmy Katz leads many lives. He is the preeminent currently active jazz photographer, and has shot more than 200 magazine covers and over 600 recording … END_OF_DOCUMENT_TOKEN_TO_BE_REPLACED

Take a look at Blue Note Records’ release schedule for 2022 and it’s hard to miss the significant percentage of electronic-oriented music. In March, the … END_OF_DOCUMENT_TOKEN_TO_BE_REPLACED