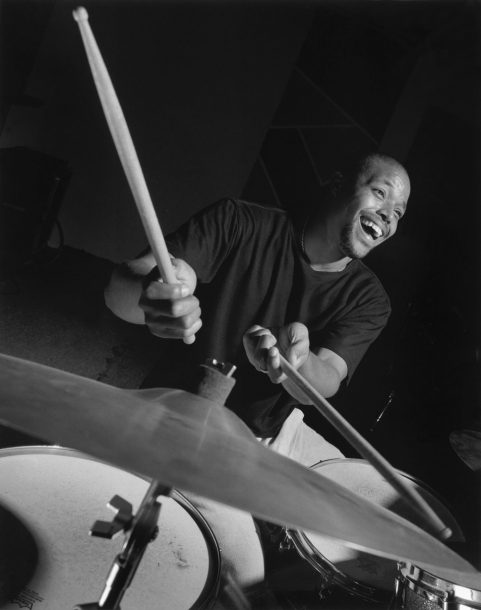 Whilst double-stepping the six blocks between West 4th Street and the Village Vanguard-drummer Nasheet Waits is hitting there with pianist Jason Moran’s New Directions-my mind began to trip on the latest batch of jazz legend progeny-Anthony Wilson, Ravi Coltrane, Graham Haynes. Will they be able to transcend legions of skeptical critics and curmudgeonly fans and get their props, and why the fuck should they have to deal with that as well as paying traditional dues anyway? This hackneyed soliloquy was left hanging in the humid ether of Seventh Avenue South as I descended into the cool dimness of the basement mecca. Still, as I watched Waits purposely settle in-tweaking cymbals; adjusting seat; checking pedals; blessing his toms and snare with sticks, mallets and brushes-three hoary clichés nagged my membrane like a Diana Ross chorus: He’s a chip off the old block; He’s his father’s son; The apple don’t fall too far from the tree.

A resident of the Max Roach side of the tracks (at the corner of Billy Higgins and Tony Williams), Freddie Waits was an economical, stylistically versatile, rhythmically subtle drummer. You know the kind of selfless player that gets perpetually slept on by everyone but the major cats who jam/record/tour with him or her. Senior Waits’ tasty, no-frills style (ride cymbal setting, modulating and shifting the pulse, bass drum shadowing the bass fiddle, crisp snare drum just behind the beat, random bursts of crash/toms) and Swiss precise timekeeping made him the consummate Blue Note team “vibes” man; the catalytic ghost in the machine. I only saw Freddie live once, with Max’s M’Boom, but if you’ve heard his sides with Andrew Hill or Grant Green then you feelin’ me.

Back at the Vanguard, New Directions commenced to work their asses off.

The other Nasheet Waits, the funky-freaky-just havin’ fun one, showed up on ND’s cheeky set-closing version of “The Sidewinder” (the tune from New Directions’ recent self-titled, classic-Blue-Note-cover-tune-focused album). The band was wailing most irreverently-Moran staggering-stumbling-tripping the melody like Monk on Quaaludes, Osby and Shim pimp slappin’ the boogaloo vamp, Waits and Mateen cold boppin’ the groove-until the ONW cold sweated (literally) the joke from the ridiculous to the sublime. Remember the give-the-drummer-some solo on “Cold Sweat”? Now imagine it recontextualized as a no-holds-barred funky-jazz drum solo (left hand dropping bop-eccentric bombs and off beats, right hand swinging hip-hop abstracts, bass drum racing heartbeats). Smell it? After that, the party broke up.

Note to self: Nasheet Waits is both seed and fully-grown apple tree.

Now let’s bust this whole children-in-daddy’s-footsteps curse thing wide open. Example: New York-bred Nasheet’s primary influence was not his father but buddies drummer Eric McPherson and saxophonist Abraham Burton, whose partnership continues on their excellent new CD, Cause and Effect (Enja). “We grew up in the same neighborhood, went to elementary school, junior high school, all that stuff together,” he muses. “So when I would hang with them, they were into the music. My family, my peers, I was surrounded by it. I went to Morehouse for a few years and I wasn’t studying music down there and neither was I focusing on that in high school. But Eric and Abraham kept playing. So when I came back to the city to hang with them, they were always going to the jazz clubs or going to the record stores. And stuff that they were picking up was like ‘Trane-that was the stuff I was being exposed to along with the other stuff, popular music, that was happening.”

Good thing Nasheet’s crew kept him in the mix, ’cause Mr. Waits wasn’t even trying to pass the torch to his son at home. But little Nasheet dib-dib-dabbed with the traps anyway. “It was probably the fact that my father played them and I wanted to be like him,” he laughs. “I’m his child, so I played them. I never really had the desire to pick up another instrument.”

Beyond that bond, the elder Waits’ experiences were passed along via “osmosis, from being around him, from going to the gigs and being around him with other great musicians that come to the house or that he was playing with.” One long introspective pause later, Nasheet adds. “There are certain things that I notice in my playing earlier on that he was the primary source for that approach but it wasn’t because I studied it, like I listened; I think it just happened because I’m his son.”

Upon his father’s passing on Nov. 18, 1989, the prodigal son left Morehouse and moved back home. For the first time in Nasheet’s life, the eyes were focused on the prize. When you get serious like that, good things happen; within a year, the dabbler was enrolled in Long Island University’s music program (B.A., ’96), drum teching on M’Boom gigs for “Uncle” Max and private studying with master drummer Michael Carvin. Midway through ’92, a recommendation from McPherson led to Nasheet’s six-year, three-album, bones-making stint with Antonio Hart’s young lion band. Of that time, he remembers wistfully, “It was a different type of dynamic in terms of a group situation. It was more geared to the history of the music-driven and swinging exclusively. It was good we were playing tunes like ‘Cherokee’ because I needed that foundation. To be able to develop you have to have some kind of language and want to be acquainted with the music. I wanted to be.”

More than just roots-grounding, the Antonio gig earned Waits first-call status with veteran leaders such as Joe Lovano, Geri Allen, Mario Bauzá and Jaki Byard. All those experiences have been invaluable in Waits’ ongoing artistic evolution.

“Being in the jazz community affords you the time to do this,” says Waits. “Playing with Antonio afforded me a lot of exposure, but generally the situations we played in were peer-oriented situations. Everybody was in the same age group, which was cool ’cause it was like we were finding things out at the same time. Whereas if you play with somebody like Andrew Hill or Hamiet Bluiett or Stanley Cowell [all recent, ongoing gigs] they give you the freedom to do what you want to do more so, probably. It’s probably because they understand more about what they’re doing! [cracks up]”

Pausing, he then continues serious-like: “One thing I definitely learned is that first of all, you’re always making mistakes. That’s definitely not a problem for me at least. My attitude towards making mistakes is that’s where some of the baddest shit is created. If you out there fucking up and you’re still in there, then it’s like you supposed to be doing that.”

These days Nasheet usually can be found on recordings and bandstands in the company of pianist Marc Cary or “these Blue Note guys [Osby, Moran, et al.].”

“I think we’re all kind of moving in the same direction as well as in terms of like the interpretation of whatever you want to call it. When we play with each other it’s more of a community within that as opposed to, ‘OK, I’m the leader and you’re gonna do what I want you to do.’ It’s more like, ‘I’m hiring Nasheet because of the way he plays and I know the way he plays.'”

Still, for Nasheet Waits, the mission rolls on, the struggle continues.

“Even though I love playing with Tarus and Jason, if that was to be the only thing that I did over the course of the next five years that shit would drive me crazy. Then it’s like that’s the only creative input you get in terms of that consistent bandstand shit. When you go on a bandstand with different people to deal with, you’re dealing with everybody’s whole energy. So that becomes something entirely different and I always like checking things out that are foreign from what I might be dealing with most of the time.

“My goal is to have a positive energy circulating the whole situation, even if there’s negative energy, even if you’re salty with some of the people on the stage or something happened to you early on in the day. Emanate that positive energy. That can be experienced in a musical sense and also in an emotional, spiritual type of sense too. I’m not really trying to get on the gig and prove anything, [I’m] trying to play within the context of the music and bring as much strength and validity as possible.”

Pops would be chest-puffing proud of the chip, the apple, the son.

“I try to keep listening to different things. I’ve been listening to this tabla duet album with Ustad Allarakha Khan and Zakir Hussain. It’s called Tabla Duet-Oooo, that’s serious. There’s this album that my father was on called The Wee Three; an album with Stanley Cowell and Buster Williams. It’s a Japanese release on DIW. It’s a nice trio album. Let me see…James Brown. It’s like a greatest hits-20 All Time Greatest Hits-that shit is killer. Other than that, I’m enjoying this last Jason [Moran] one [Facing Left] and that Marc Cary [Trillium] and this other album I just did with Orrin Evans [untitled at press time].

Michael Marcus: In the Center of It All (Justin Time)

When you’re on TV, everybody knows you, or at least thinks they know you. Take Kevin Eubanks, who was on NBC’s Tonight Show five nights … END_OF_DOCUMENT_TOKEN_TO_BE_REPLACED

Jimmy Katz leads many lives. He is the preeminent currently active jazz photographer, and has shot more than 200 magazine covers and over 600 recording … END_OF_DOCUMENT_TOKEN_TO_BE_REPLACED

Take a look at Blue Note Records’ release schedule for 2022 and it’s hard to miss the significant percentage of electronic-oriented music. In March, the … END_OF_DOCUMENT_TOKEN_TO_BE_REPLACED

Those who are only familiar with bassist Martin Wind’s jazz credentials—both as a leader and as a first-call sideman for Bill Mays, Dena DeRose, Ken … END_OF_DOCUMENT_TOKEN_TO_BE_REPLACED