Skip to content
Become a member and get exclusive access to articles, live sessions and more!
Start Your Free Trial
Home > Features > Myron Walden: Kind of a Comeback 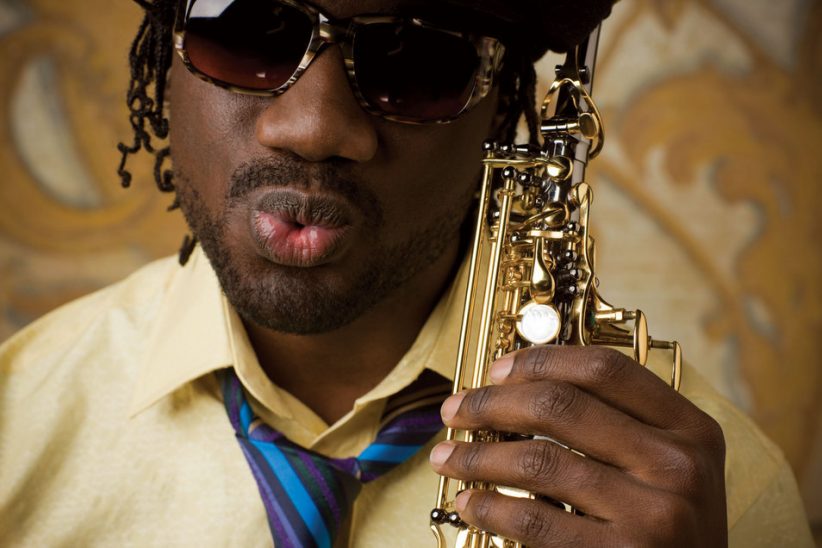 Listening to saxophonist Myron Walden is like watching Daedalus fly too close to the sun—it’s exhilarating to see him glide past chord changes and conventional jazz structures, but there’s the constant fear that if he goes any higher, his wings will melt. Somehow, that never happens.

Walden, 37, brought this feverish energy to the Jazz Gallery Sept. 30, the last night of a five-week pro bono residency at the venerable no-frills, all-music SoHo institution, where he played each Wednesday with a different band. Reuniting his Apex Trio for the first time in 10 years, the multi-reedist, known primarily for his longtime association with the Brian Blade Fellowship, played as though not a day had passed since the last time he took the stage with bassist Dwayne Burno and drummer Eric McPherson.

“If I can get the first note to be right, the night’ll be cool. But if I miss the first note, I’ll hear about it for the next 10 years,” Walden said, with an air of self-deprecating humor, before opening the set. Needless to say, he hit it.

Walden’s Jazz Gallery residency came on the heels of a five-year sabbatical from recording as a leader. In the interim, Walden made strong contributions to albums by Blade, Freddie Hubbard, Kendrick Scott and others, and studied intensely on tenor. He returns now with a series of powerhouse records on his own Demi label that showcase the breadth of his talents: Momentum (and its companion disc, Momentum Live, both released Nov. 17), the two-album In This World project (released Jan. 15), and Countryfied (slated to drop in February). Each illustrates a different facet of Walden’s persona: In This World captures his spiritual side, Momentum the intellectual, and Countryfied the rootsy-a triangulated vision that conjures Charles Mingus’ famous pronouncement, “I am three.”

Walden plays with a Phoenix-like virtuosity and an attention to rhythmic detail rarely heard among saxophone players, laid bare in the trio setting as he parried Burno’s heavy, pulsating bass chords and McPherson’s inventive rhythms with a deft lightness of touch.

The set ended on a high note, quite literally, with Walden welcoming unexpected guest Jaleel Shaw onto the stage for an alto saxophone battle royale on the driving “Freight Train,” a modal tune which Shaw was sight-reading. “I usually don’t even like it when they play other alto players’ records before the gig,” Walden joked, “but this is what it’s all about.”

Walden was among the first to pass through the Jazz Gallery’s emerging artists program, having played with Roy Hargrove’s big band when the venue first opened in 1995, in addition to stints at West Village jazz breeding ground Smalls. Moving to the Bronx from Miami at the age of 12, Walden was self-taught, bringing himself up by his bootstraps armed with nothing more than a used Bundy alto harvested from his public school’s dying music program, an instruction book given to him by a saxophonist who lived in his building, and a tattered Charlie Parker record.

“My neighbors didn’t like it much, beginner’s saxophone in tight quarters. It was kind of rough, but my love for it softened their hearts,” he said. “I’m headstrong—I have my way of doing things. I never really learned the right way. Maybe I developed in the dark, but I was able to learn by osmosis or trial and error.”

A few years later he enrolled in the LaGuardia High School of Music & Art, where he began formal instruction surrounded by a confluence of talent, including McPherson and fellow saxophone prodigy Abraham Burton. But Walden really learned to play at Augie’s, the Upper West Side club that later became Smoke, when classmate and guitarist William Ash brought him to hear bebop saxophonist Jesse Davis, who held court every Friday and Saturday.

“I was blown away. I couldn’t believe that anyone walking could play this way,” Walden said of Davis. “Rain, snow, sleet, ice on the ground, below-zero temperature-I wouldn’t miss it.”

In early October, Walden appeared with his Countryfied power trio at Fat Cat, a beer-soaked basement jazz haunt in the West Village that marries foosball, cheap cans of Pabst Blue Ribbon and a couple slender rows of couches reserved for the few aficionados there solely for the music. Strange bedfellows, but Walden, Hammond B3 organist Jared Gold and drummer Kenneth Salters managed to bridge the gap. In a rare crossover moment, several people abandoned their drunken backgammon games and fierce ping-pong matches to bum-rush the stage and groove to his lithe, Southern soul-drenched melodies.

“Sometimes in jazz, and this is not a knock at it, one can be so set in playing hipper than anyone else, whether you’re a drummer playing more superimposed rhythms or a horn player playing changes, you almost alienate your audience, the congregation, the people you’re playing or preaching to,” Walden said. (The analogy is apropos: Walden plays once or twice a month at the Redeemer Church, a Manhattan-based Presbyterian congregation where fellow Fellowship bandmate pianist Jon Cowherd serves as music director.) “If you think about someone taking a solo over ‘Giant Steps’ or ‘Countdown,’ you’re not going to be able to sing it back. I want to be able to play a solo where it’s so relatable you want to sing it back to me.”

Guitarist Will Bernard bears the bittersweet blessing of virtuosic skill and eclectic taste, making his music a perpetual delight and yet hard to categorize. Maybe … END_OF_DOCUMENT_TOKEN_TO_BE_REPLACED

At 95, Chicago-based guitarist George Freeman is among the world’s oldest active jazz musicians. Although he came of musical age in the 1940s and counts … END_OF_DOCUMENT_TOKEN_TO_BE_REPLACED

When you’re on TV, everybody knows you, or at least thinks they know you. Take Kevin Eubanks, who was on NBC’s Tonight Show five nights … END_OF_DOCUMENT_TOKEN_TO_BE_REPLACED