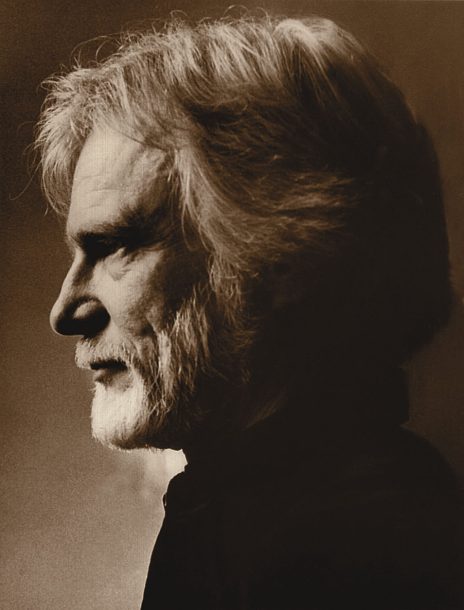 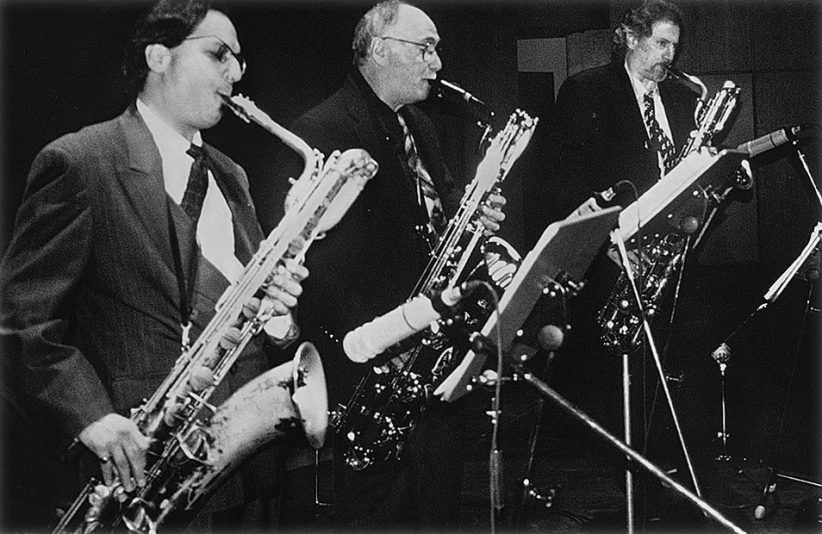 Let us now praise those souls who have long languished in relative neglect, sitting stage left in the sax section, providing honk factor in soul-oriented groups, and otherwise serving functions off to the side of the spotlight.

Too often, baritone saxists are accustomed to lurking in the shadows, providing an important low end for their saxophonic brethren, and settling for token improvisational stretch time. Lately, though, things have been looking up. Projects such as Hamiet Bluiett’s baritone quartet are helping to bring the instrument a newfound respect as a lead instrument.

And the instrument is very much upfront and center-in more ways than one-on the unique new project by the group matter-of-factly dubbed Three Baritone Saxophone Band. With their debut album on Dreyfus, Plays Mulligan, the bari section is the horn line. True to the influence of the late Gerry Mulligan, who brought the instrument to a new plateau of public acclaim, they play without piano, allowing both freedom and challenge. The baritones are: Nick Brignola, Ronnie Cuber, who also wrote the arrangements and Gary Smulyan, supported by bassist Andy McKee and drummer Joe Farnsworth, and with all swinging mightily.

Is there a fraternity of bari players? Do they stick together? Smulyan says, “I would say so. They’re pretty supportive of each other. It’s got to be the smallest fraternity on the planet, apart from maybe the fraternity of sackbutt players. We all know each other.”

The new album came about when Smulyan came up with the idea of a Mulligan tribute, after the saxist’s death in 1996. The bari trio played, to kudos, for three nights at the Image/Jazz festival in Rome. “The concept behind it was to do a Mulligan tribute,” Smulyan says. “But now that we’ve done that, we would like to keep the band going and find some other directions to go in, because it’s a very interesting sound, in terms of the three baritones, bass and drums, with no piano. There are a lot of possibilities inherent in that sound.”

By Smulyan’s reasoning, “Mulligan has a big impact on anybody who plays the baritone, if not directly, certainly indirectly, just as someone like Harry Carney does. You can’t help not be touched by somebody who was such a monumental figure on the instrument. I have only the greatest admiration for his artistry. Just through the fact that I play the baritone, I’m influenced by him. I just don’t think you can help it. It’s just like anybody who plays the saxophone can’t help but be influenced by Bird in some way.

“He took the instrument in a different direction. His sound was very personal and very unique, and his conception was the same. He had a strong sense of direction, in terms of where he wanted music to go.”

While the first live experience with the Mulligan tribute was more or less a loose playing situation, more detailed settings were in order. That’s where Cuber’s handiwork as arranger came into play. He settled on a set of tunes either written by, or connected with, Mulligan, as well as one Cuber original, a twisted blues waltz, “Waltz for Geraldus.”

Cuber comments, “The record company didn’t want us to just play his tunes and blow. They wanted arrangements. So I had to restructure the whole thing and make it more ensemble-like. That was an interesting process. We didn’t use a piano on the album, so that left the baritones really out there in the open. It was really nice.”

Despite his intimate knowledge of the baritone, writing for this format had a built-in challenge. “Being that it was three baritones, instead of tenor, alto and baritone, or trumpet and trombone, where the trumpet had the high sounding horn, now you’re dealing with three baritones, and they’re all in the same register. Obviously, you had baritone one, two and three, and baritone one has to play the high part, almost in a tenor range. So I found myself playing up there, when I’m harmonizing melodies, almost going beyond the normal range of the instrument.

“And having to reharmonize the melodies that were in the repertoire was interesting. It would almost be easier for me to write for four horns rather than three, because I’d have a full chord with four horns. With three horns, I had to kind of decide which note I was going to leave out to make the chord sound full, and not empty, having the notes resolve in a certain way.

The horns get extra margin for expression in the bass-and-drum rhythm section, an idea that pays homage to the pianoless Mulligan group with Chet Baker. As Cuber explains, “A lot of clubs didn’t have piano when Mulligan went out there in the ’50s. There were clubs out there without pianos, or maybe they did but they weren’t too good. So I guess that’s how he started that pianoless quartet with Chet Baker.”

Mulligan wasn’t necessarily a primary inspiration for Cuber, however close he later became to his music. When Cuber switched from tenor to bari as a 17-year-old, he was listening more to Pepper Adams. “He was the cutting edge baritone player of the day, in the late ’50s, early ’60s,” Cuber comments. “I got to know Pepper. Then I started getting into Blue Note recordings of the ’50s and ’60s. I like the particular sound they were getting and I was getting into Art Blakey and Horace Silver, the post-bop music of the time. It was more leaning towards that direction than the west coast tradition.”

Brignola, who was on the recording but is replaced in the live band by Charles Davis, is one of the current legends of the baritone world. His resume includes work with Woody Herman, Charles Mingus, Phil Woods, but his main emphasis in recent years has been on his own healthy recording/live work as a leader. Brignola has long held to the idea of liberating the baritone from its shackles.

He explains, “The baritone, when played in the traditional way, always sounds like the buffoon of the saxophone family. If you think about it, a lot of the big band charts written to feature the baritone have these funny noises that the baritone can make. They take advantage of the low range, the bottom. I think differently about it.

“Mulligan actually proved that you didn’t have to play that way. He had his own sound. It certainly wasn’t a baritone section sound, like Harry Carney’s. I go along the lines of still playing on the bottom, but making it project more, not giving it such a big, fat buffoon sound. Unfortunately, most baritone players get that sound. That’s a great sound to have if you play in a big band, because it fills out the bottom.

“So everybody has been in that mode for years, but I’ve been the opposite, because I never worked much in big bands. I’ve done some stints here and there, but I was never a big band player. I never considered myself that. I was more of a soloist. So I approach it from a little different angle. What has helped me is that I double on all the other horns. I hear other things, so when I pick up the baritone, I try to put those on the baritone.”

Cuber has straddled jazz and other musical worlds since the ’60s, when he cut his teeth with big bands led by Maynard Ferguson, Woody Herman and Lionel Hampton. But he deliberately ventured beyond the big band scene, jamming with musicians, landing a spot in George Benson’s ’60s quartet, playing with Eddie Palmieri and others.

These days, you can catch him on most Thursdays with the Mingus Big Band, holding court at the Fez in Manhattan, as well as selective touring. But he veers in other directions, as well. This year alone, Cuber was on three albums nominated for Grammies: Conrad Herwig’s The Latin Side of Coltrane, Boz Scaggs’ Come on Home, on which he was both a player and arranger, and as a player on a live album from Dr. John, with whom he has played off and on for years.

The Three Baritone Saxophone Band began with a specific project in mind, but the generous response to the music, and the passionate interest of the players involved promise more activity in the future.

These three bari players seem to be helping to redefine the place of their instrument, or at least its stereotype. “I don’t know if it’s stretching the definition so much as it is exposing people to the possibilities of the instrument,” Smulyan clarifies. “The instrument surely is more capable of doing things other than just being allocated as the fifth saxophone in the saxophone section. But in terms of stretching the possibilities, Hamiet Bluiett certainly does a lot of interesting things and Howard Johnson certainly does a lot of interesting things.

“I like to showcase the baritone in different kinds of environments. On my last record, I did it with strings, doing all obscure standards and showcasing the baritone as a lyrical instrument, almost approaching it from the point of view of a vocalist. That hasn’t been done often, and the baritone is certainly capable of great lyricism and beauty. That’s something that most people wouldn’t associate with the horn, just because of the way it usually sounds. It’s just a matter of exposure.”

For Cuber, the issue of the jazz scene giving the baritone its due isn’t any great motivation. “I don’t like to think in terms of the idea, ‘maybe someday we’ll get our due.’ If you think that way, then there’s always a kind of negative vibe, with an attitude of ‘how come they’re not paying attention to us?’ Of course, there’s going to be a struggle, but I think it would be the same if I were playing tenor or alto. It’s the same. I made my name on the baritone. But no matter what instrument I play, there will be a lot of competition out there.

“I’m just looking at my instrument, trying to make the best music, regardless of the tool.”

Gary Smulyan plays a Conn 12M made in 1936, with a metal Autolink 8 star mouthpiece, and Van Doren #3 reeds.

The Individualism of Gil Evans (Impulse!), Tom Harrell’s The Art of Rhythm and Aretha Franklin Live at Fillmore West (Atlantic).

At 95, Chicago-based guitarist George Freeman is among the world’s oldest active jazz musicians. Although he came of musical age in the 1940s and counts … END_OF_DOCUMENT_TOKEN_TO_BE_REPLACED

When you’re on TV, everybody knows you, or at least thinks they know you. Take Kevin Eubanks, who was on NBC’s Tonight Show five nights … END_OF_DOCUMENT_TOKEN_TO_BE_REPLACED

Jimmy Katz leads many lives. He is the preeminent currently active jazz photographer, and has shot more than 200 magazine covers and over 600 recording … END_OF_DOCUMENT_TOKEN_TO_BE_REPLACED