Skip to content
Become a member and get exclusive access to articles, live sessions and more!
Start Your Free Trial
Home > Features > Orrin Evans on Joining the Bad Plus 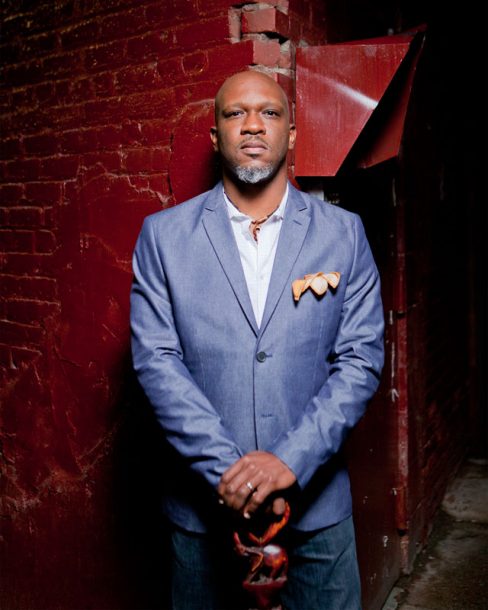 “Wherever this music takes us ... I‘m down,“ Orrin Evans says (photo by John Abbott)

On April 9, the Philadelphia-based pianist Orrin Evans tweeted, “I have so much to say but I’ll wait until tomorrow :)!!” What was he about to announce? A new album? A teaching position? Turns out it was something few in the jazz community could have anticipated. The following day, it was revealed that, starting in 2018, Evans would be the new pianist in the Bad Plus, the era-defining left-of-center jazz trio that has been kicking since 2000. The Bad Plus as we know it, beloved for its dramatic, emotive original music and inspired rock and pop covers, is scheduled for demolition. In search of inspiration elsewhere, and due in part to well-hidden tensions within the ensemble, pianist Ethan Iverson will play his last hit with drummer Dave King and bassist Reid Anderson at the Village Vanguard on New Year’s Eve.

Though any pianist switching in for Iverson would at first seem like a strange choice—the Bad Plus’ sound is so solidified at this point that removing any of the three voices might render the group unrecognizable—the decision to bring in Evans, 42, shouldn’t be a shocker. For one thing, he’d already played with members of the group when the initial phone call came earlier this year. Evans, whose playing is soulful and robust, and Iverson, who skews wry and postmodern, have performed as a two-piano duo, and Evans and Anderson, especially, have enjoyed a long relationship. They first met when the bassist was attending college in Philadelphia and Evans hadn’t yet graduated from high school. Anderson later appeared on Evans’ 2000 album Listen to the Band. “I really don’t feel like I’m walking into a strange or foreign environment,” Evans says the day after the announcement. “I’m just walking into a new one, because I know these gentlemen, and they’re people I can consider friends and family.”

No stranger to the jazz-piano trio—he plays in Tarbaby, with bassist Eric Revis and drummer Nasheet Waits, and dropped an album in 2015 with bassist Christian McBride and drummer Karriem Riggins—Evans has something else in common with the members of the Bad Plus: passion. “To be in a band and have a band for two years is some bad shit,” Evans says. “But to have a band and be in a band for 17 years … man, that’s amazing. That’s some real dedication. So I’m looking forward to being a part of that. Will I have 17 years? Man, I’m riding the ride. Wherever this music takes us, and this journey takes us, I’m down for the ride right now.”

The trip will include some serious research. Though a new album is already in the works, and Evans is considering composing for it, the group has pledged to keep playing the compositions that led them to jazz stardom in the first place. “You can get the gig with Sonny Rollins and you might not have to learn the book from 40-something years ago,” Evans says. “He can just say, ‘These are tunes I’m playing in my band now.’ But when you join a band that has followers and fans, they don’t wanna just hear the new record. There’s gonna be people there screaming for shit from the first record, and I have to be prepared for that. Does that mean I’m gonna know all of those tunes? No. But I need to be familiar with a 20-year history of music in order to not be the one who came along and destroyed all the fans’ favorite band [laughs].”

Evans is not the only one concerned with the band’s audience. In fact, that’s something he likes about Anderson and King—how much they care about the people on the receiving end of their music. “How many jazz bands would announce that a piano player is gonna change in six months?” Evans wonders. “They’re like, ‘Look, we love you, fans! Just get ready!’”

Jimmy Katz leads many lives. He is the preeminent currently active jazz photographer, and has shot more than 200 magazine covers and over 600 recording … END_OF_DOCUMENT_TOKEN_TO_BE_REPLACED

Take a look at Blue Note Records’ release schedule for 2022 and it’s hard to miss the significant percentage of electronic-oriented music. In March, the … END_OF_DOCUMENT_TOKEN_TO_BE_REPLACED

Those who are only familiar with bassist Martin Wind’s jazz credentials—both as a leader and as a first-call sideman for Bill Mays, Dena DeRose, Ken … END_OF_DOCUMENT_TOKEN_TO_BE_REPLACED

Have saxophone, will travel. With apologies to Paladin, that sums up the career of reed player Greg Abate. Since the early 1990s, he’s been a … END_OF_DOCUMENT_TOKEN_TO_BE_REPLACED