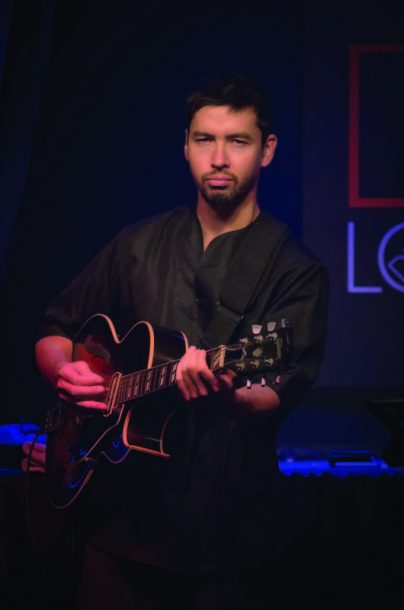 Miles Okazaki's "Trickster" is due out later this year

The route by which guitarist Miles Okazaki arrived at his forthcoming quartet album, Trickster, was circuitous, but logical and eminently artistic. With three all-original outings to his credit since 2006 (Mirror, Generations, Figurations), the Brooklyn-based Okazaki hurled himself into an idiosyncratic book project in 2012. Mel Bay ultimately published his complex and ambitious Fundamentals of Guitar in 2015. From that enormous undertaking came a new batch of uncharacteristically guitar-centric music, written for a new band, his first to bypass horns. (Trickster is expected later this year.)

“In order to do the book I stopped writing music for three years,” explains the 41-year-old father of three. “There’s a time when I [compose]: I get up very early and I stay up late. Or I do it while traveling. So I just switched all that time over to writing the book. Every day, a couple hours, for three years. That adds up. You have to stick with it, and it helps if you’re obsessed with it.”

The term “obsessive” seems apt when confronting Okazaki’s work, from the original album art and visually creative scoring of those first three discs to the 12 opening pages of Fundamentals of Guitar-edited down from 30 pages-devoted just to tuning the guitar. The book, which grew out of Okazaki’s forays into teaching at the Banff Centre and elsewhere, implicitly rebukes the ever-popular “learn 1,000 chords!” approach. About this, the laidback Okazaki can get almost hot under the collar: “Those things are wasting people’s time. It’s disrespectful in a way to say, ‘Here’s your quick way to learn the guitar.’ There’s no shortcut to anything.”

Instead, Fundamentals of Guitar delves into the science of sound and the unique two-dimensional mechanics of the instrument, with part one devoted to pitch (the fretting hand) and part two to rhythm (the picking hand). There’s staff notation but also shapes, schematics and other layouts created specifically to suit the information at hand. (Edward R. Tufte’s The Visual Display of Quantitative Information was an important guide.) “This is not about style; there’s no jazz in here,” Okazaki says. “It’s just information. There’s no expectation that you should go through all this stuff. You don’t go through a dictionary, you just use it to look up a word here and there. It’s the same type of thing.”

Dealing with applied concepts from the book-all-interval tetrads, rhythmic pentatonics, pick rudiments, diatonic and chromatic ornaments and so on-amounted to a great deal of guitar practice for Okazaki. So when it came time to compose again, he wanted more than ever to showcase his own playing. On Trickster he’s joined by pianist Craig Taborn as well as electric bassist Anthony Tidd and drummer Sean Rickman-the rhythm section from Steve Coleman and Five Elements, a key sideman gig for Okazaki over the last several years.

The writing for Trickster involves “a lot less information” than earlier efforts, the guitarist says. “Mirror had a 70-page score, but the scores keep getting smaller. On Trickster they’re largely just symbolic. Sometimes there are just instructions.”

One could say that Okazaki’s artistic personality began forming on May 18, 1980, when Mount St. Helens erupted and his hometown of Pullman, Wash., 350 miles away, “turned into the moon. It was like an apocalypse.” He developed a deep interest in science and began to draw, voluminously. He took up guitar that same year, at age 6. Gigging by 13, he continued as a working musician even as he went on to major in English at Harvard. In 1997 he began his graduate work at Manhattan School of Music, where his guitar study with Rodney Jones and collaborations with drummer Dan Weiss, alto saxophonist Miguel Zenón and others put him on his present path. Along the way he toured with Stanley Turrentine and Jane Monheit and placed second in the 2005 Thelonious Monk International Jazz Guitar Competition.

The bond with Dan Weiss has proved especially enduring. The drummer cites “Spiral,” from Mirror, as “one of the hardest things I’ve ever had to play.” “Mandala,” from Figurations, was another significant challenge. “I still work on these ideas on the drum set,” says Weiss, who recruited Okazaki to play “Lehera” (a fixed melodic pattern in Indian classical music) on his groundbreaking Tintal Drumset Solo and Jhaptal Drumset Solo, and has featured the guitarist on both of his large-ensemble releases for Pi Recordings, Fourteen and Sixteen: Drummers Suite. “On ‘Tony’ [from Sixteen, inspired by Tony Williams], for instance, there’s that rhythmic cycle toward the end, which is tricky and pretty weird,” Weiss remarks. “Who better to ask than Miles to play on that section?”

At press time, Okazaki was prepping for a week in May with Steve Coleman at the Village Vanguard. In neat folders around his Brooklyn music room were charts for upcoming gigs with pianist Matt Mitchell and trumpeter Amir ElSaffar (the latter involving a new quarter-tone guitar). Fresh sideman appearances with alto saxophonist Patrick Cornelius (While We’re Still Young) and bassist Alexis Cuadrado (Poetica) attest to Okazaki’s unpredictable muse and increasing sonic refinement. These overlapping musical responsibilities might seem daunting, but Okazaki approaches them the way he approached his book-methodically, step by step. Paging through Fundamentals of Guitar one more time, he concludes, “It’s not that deep, really. I’m just trying to be organized about it.”

When you’re on TV, everybody knows you, or at least thinks they know you. Take Kevin Eubanks, who was on NBC’s Tonight Show five nights … END_OF_DOCUMENT_TOKEN_TO_BE_REPLACED

Jimmy Katz leads many lives. He is the preeminent currently active jazz photographer, and has shot more than 200 magazine covers and over 600 recording … END_OF_DOCUMENT_TOKEN_TO_BE_REPLACED

Take a look at Blue Note Records’ release schedule for 2022 and it’s hard to miss the significant percentage of electronic-oriented music. In March, the … END_OF_DOCUMENT_TOKEN_TO_BE_REPLACED

Those who are only familiar with bassist Martin Wind’s jazz credentials—both as a leader and as a first-call sideman for Bill Mays, Dena DeRose, Ken … END_OF_DOCUMENT_TOKEN_TO_BE_REPLACED