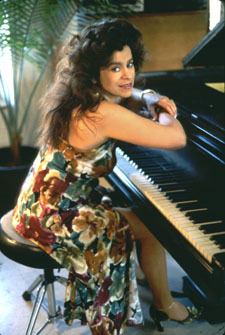 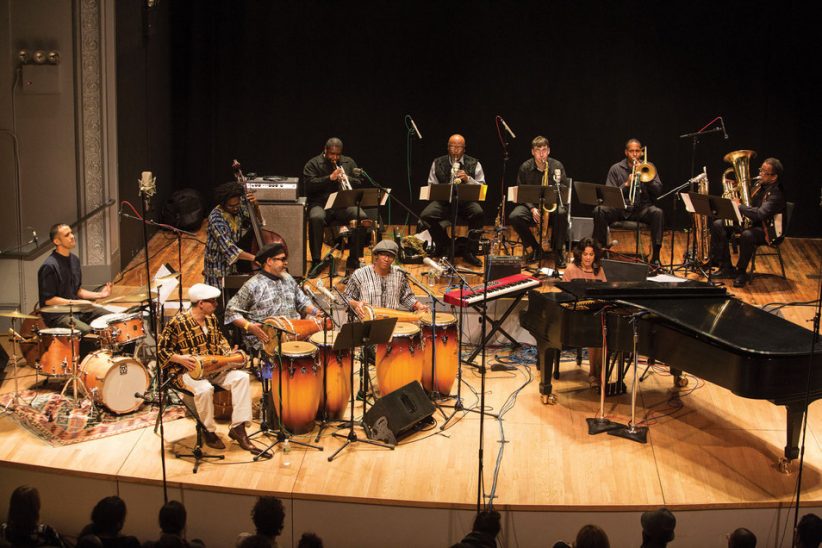 In the belief systems of Nigeria’s Yoruba society-whose influence has crept across the globe in the form of art, philosophy and, most of all, music-lines of division tend to disappear, and aesthetics are inseparable from substance. Anything of great social value ought to have a kind of loveliness. One of the essential words in the Yoruba language is amewa, “knower of beauty.”

In the United States, whose influence has covered the world like pavement, value equals currency. Success is a kind of accumulation that emphasizes difference. It’s up or down, legal or outlawed, young or old.

So what about Cuba, an island just 90 miles off the southernmost tip of the United States whose black population retains the traditions of its Yoruba ancestry under the name Santería? Could it offer a middle ground?

The latest album from the pianist and composer Michele Rosewoman, New Yor-Uba: 30 Years-A Musical Celebration of Cuba in America (Advance Dance Disques), uses the idea of Cuba to point at a more metaphysical meeting place-between sturdy traditions and forces for change, ancient pride and renewed struggles. Its 13-piece band weaves together avant-garde jazz and Afro-Cuban spiritual music, emerging with a honeyed but penetrating sound that is equal parts orchestration, improvisation and rhythmic lattice.

The record was long in the making. Rosewoman has led her large New Yor-Uba ensemble since 1983, but it had never recorded until last year. She financed the project with a Kickstarter campaign, and released the album in October on her own imprint. In the few months since, she has experienced a stronger sweep of critical acclaim than ever before. “I’m so happy people are beginning to really talk about her on a larger scale, because she’s been the same the entire time,” says the bassist Rufus Reid, who played in the earliest iteration of New Yor-Uba. “She’s been working her tail off with these big projects. She always thinks big.”

Rosewoman, 60, stands at a trim 5-foot-3, but New Yor-Uba feels capacious, wide enough to span oceans and centuries. The band varies depending on the circumstance but hovers at around a dozen musicians, about half of whom are American jazz musicians. Its frontline consists of three Cuban drummers who play the batá, or double-headed “talking drums,” which are the centerpiece of traditional Yoruba (yo-roo-BAH) ceremonies.

But equally important to the album’s effect are its melodies, hybrids of Yoruba folk song and Rosewoman’s Ellingtonian compositional sense, which rise in thick and quavering braids. They’re often sung in three-part harmony over a pedaling batá rhythm, sometimes ebbing into the avant-funk that has always held Rosewoman’s folkloric impulse in a kind of low, beautifying relief.

The week of New Yor-Uba: 30 Years‘ release, Rosewoman performed four sets over two nights at Jazz at Lincoln Center’s Dizzy’s Club Coca-Cola; it was the first time in her 35 years on the scene that she had been invited to perform at JALC, the Buckingham Palace of New York jazz.

A highlight of the second night came at the beginning of “Old Calabar,” which incorporates rattling rhythms from the Abakuá tradition, a close cousin of the Yoruba. Lead batá player Román Díaz blew and spat words of sanctified poetry, his inflection cresting from spoken to sung and back, syllables leaping from his mouth like a frog off a branch. The way those notes turned up at the ends, his cadence thrown out just ahead of the instrumental lines-to a jazz listener, it might have brought a Cuban Louis Armstrong to mind.

Díaz’s voice is burly and roughshod, but the sound of New Yor-Uba is more fluid than you typically expect Afro-Latin music to be, less about spikes and exclamations. It’s as polyrhythmic as any, but doesn’t jostle you much. When you listen to these tunes on the album, solos seem to disappear in and out of each other, and the songs, though striking, drift together in your memory.

The effect can be explained in a few ways. It’s partly due to the three-way conversation of batá that guides the proceedings. They call it the talking drum because its two opposing heads and skewed-hourglass shape give it a deep, bursting-and-echoing effect. It can sound like a Goliath-sized tabla, or as if its body were an elastic cavern. New Yor-Uba‘s three drummers-Román Díaz, Pedrito Martínez and Daniel Carbonell-convene a textural conversation, not a stampede.

Another explanation is in the way Rosewoman’s husky alto seeps across the album’s 14 tracks, sometimes singing lead but more often joining the coro. Feathered and poised, her voice seems to lay down a standard that guides the rest of the band. It is reflected most clearly in the five-piece horn section, which plays rigorous and quilt-like arrangements but almost always leaves a warm and reedy (not brassy) essence in your ear.

And there’s one more thing: the unshakable sweetness to the chordal structures underneath these arrangements. It descends straight from Rosewoman’s love for soul music, something I didn’t recognize until I was sitting across from her at a trendy Jamaican restaurant in Lower Manhattan. She was wriggling in her chair, throwing her shoulders backward and lunging forward, and more or less belting the lyrics to the Floaters’ 1977 hit “Float On.” “Take my hand, come with me, baby, to Loveland,” she sang, brow clamping down and hair whipping up. “I want you to float, float on.” These words would sound glorious over some of her New Yor-Uba chord changes.

Guitarist Will Bernard bears the bittersweet blessing of virtuosic skill and eclectic taste, making his music a perpetual delight and yet hard to categorize. Maybe … END_OF_DOCUMENT_TOKEN_TO_BE_REPLACED

At 95, Chicago-based guitarist George Freeman is among the world’s oldest active jazz musicians. Although he came of musical age in the 1940s and counts … END_OF_DOCUMENT_TOKEN_TO_BE_REPLACED

When you’re on TV, everybody knows you, or at least thinks they know you. Take Kevin Eubanks, who was on NBC’s Tonight Show five nights … END_OF_DOCUMENT_TOKEN_TO_BE_REPLACED