Skip to content
Become a member and get exclusive access to articles, live sessions and more!
Start Your Free Trial
Home > Features > Michael Musillami: The Power of Three 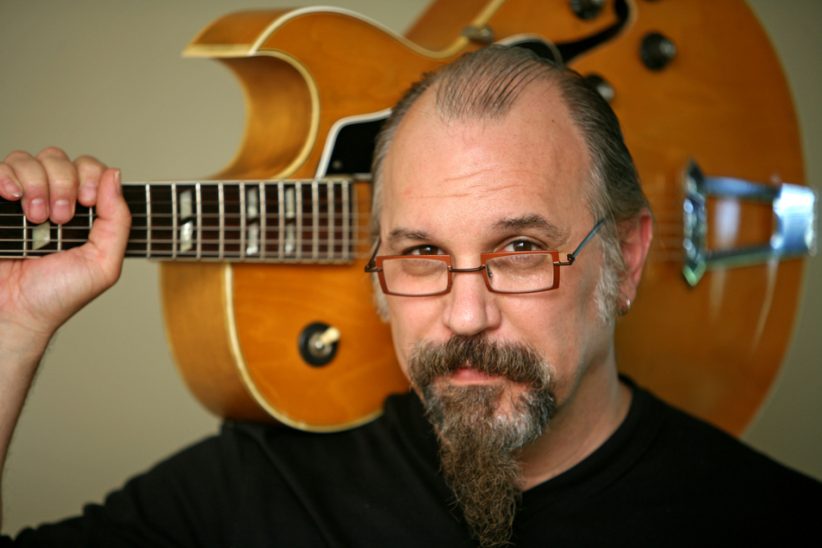 The summer of 2010 was an eventful one for Michael Musillami. He braved a tour stop in Norway with Iceland’s travel-halting volcano still dominating the news; saw his daughter off to college in Boston; took his family on their annual vacation to Cape Cod; and shaved off his ponytail in favor of a sleek bald dome. Summer Suite: Twenty Ten, the eight-part extended suite that makes up the bulk of Musillami’s latest release, Mettle (Playscape), depicts each of those memories in musical form. It also allows the guitarist-composer to ruminate on his grandfather’s days picking cotton in Nebraska, or on Astor Piazzolla’s influence on his writing. “It’s kind of a journal, really,” says Musillami. “How many times have you heard a song and said, ‘Yeah, man, I remember where I was when I heard that’? I have a different approach: I remember where I was when I wrote that.”

“Iceland” starts the suite off with a chaotic rumble, vividly depicting the volcano’s roiling core. “Bald Yet Hip” hits a playful, self-deprecating beatnik groove, while “Nebraska” deals in a sepia-tinged, almost mournful nostalgia for a lost America.

Two of the suite’s pieces are devoted to Musillami’s longtime bandmates, bassist Joe Fonda and drummer George Schuller. Mettle marks the trio’s 10th anniversary as a unit, expanding the group to seven pieces for the occasion with the addition of vibraphonist Matt Moran, trumpeter Russ Johnson and saxophonist-clarinetists Jeff Lederer and Ned Rothenberg. Don’t call it a septet, however; the name on the marquee remains the Michael Musillami Trio. “The heartbeat of this music is the trio,” Musillami explains. “I’m fully aware of how special it is to keep a group together for 10 years. So the trio is, as they say these days, the brand, and everything else is an addition to that.”

The composer takes full advantage of his expanded palette, experimenting with the various combinations and colors that his guests provide. “Bald Yet Hip” spotlights the interplay of Fonda’s bass and Johnson’s trumpet, “Liv’s in Beantown” corrals the force of the massed frontline, and “Moe” is built on the percussive bed laid down by Schuller and Moran. “As a trio, playing with others takes on a whole new approach,” says Schuller. “It just makes us play a little bit differently when we’re given a set of new parameters. Mike is always expanding his writing, looking for new ways to express himself, so Mettle is just another plateau for us.”

Musillami has augmented the trio with outside collaborators several times over the course of the band’s decade-long history. Both 2005’s Dachau and 2009’s From Seeds doubled the ensemble to six pieces, while 2007’s The Treatment featured violinist Mark Feldman. The trio takes top billing on each. “It attests to the bond we share, both personally and musically,” says Fonda, who has known Musillami for more than 30 years. “There’s a strong foundation there which you can build on top of, but it’s always based on the relationship and the music that we make as a trio.”

The celebratory nature of Mettle stands in stark contrast to the trio’s last outing, the intensely moving Old Tea. The music for that project was written following the suicide of Musillami’s 29-year-old son, Evan. The album begins with a mournful “Introduction,” but for the most part pays tribute to Evan’s life rather than grieving over his loss. Having two collaborators so close to him, both musically and personally, helped Musillami get through the tragedy, he recalls. “When something dark like that happens you depend on the ones closest to you, so both those cats were joined at the hip with me during that time,” says the guitarist. “Evan passed in the early part of summer and two weeks later we were in Europe performing this music, and I can’t think of two other people I’d want to be around when those feelings emerge. It was a tough time to play music, but maybe that was a savior. I don’t know.”

Fonda calls Old Tea “one of Mike’s great accomplishments. That music came from his heart and soul and from some deep pain for the loss of his son. Everybody knew that this was an important healing process and a way for him to send his son off.”

The trio was born out of Musillami’s desire to form a unit dedicated to a more open-ended approach. Born in Sacramento, Calif., in 1953, the guitarist’s earliest influences came directly from the jazz mainstream, founded on the likes of Chet Baker, Miles and Coltrane, and Bill Evans. He moved to L.A. to study with Joe Diorio in his mid-20s, but found the scene less than ideal. “I had a steady gig playing solo guitar five hours a night in a Mexican restaurant at the top of this hotel overlooking the Santa Monica pier,” he recalls. “It was really a recipe to drink too much.”

At a loss for inspiration on the West Coast, Musillami moved east in the early 1980s, where he hooked up with organist Bobby Buster in New Haven, Conn. He spent a year and a half touring the chitlin’ circuit with Buster and other organ greats such as Richard “Groove” Holmes. He took up residency at Waterbury’s Hillside Club as part of the house band. There, he backed touring musicians en route from New York to Boston, names like Junior Cook, Dewey Redman and Curtis Fuller. “On any given night there was a jam session somewhere,” Musillami recalls. “It was a good training ground for a young kid. I never found that in California. The guys out there were all weekend warriors.”

Also in the Hillside’s house band at the time was bassist Mario Pavone, who continues to be a collaborator today. A small scene grew up among more inventive locals such as Fonda and saxophonist Thomas Chapin, and Musillami made the decision to scrap his flourishing sideman career and strike out on his own as a leader. While he embraced the innovations of his peers, Musillami never turned his back on his more straight-ahead roots, an embracing approach that continues to characterize his music today. “There’s a bit of old school in there and a bit of new school,” says Schuller. “He uses a little bit of the tradition to prod us along into the future.”

One key element in Musillami’s ability to maintain his own voice has been his Playscape Recordings label, founded in 1999. Seeing the jazz divisions of the major labels withering or dying outright, he reluctantly waded into the treacherous waters of the record industry. The label now boasts a robust roster including Musillami and his triomates, plus Pavone, Ted Rosenthal, Peter Madsen and Tom Christensen.

Mettle joins the catalog as one of Musillami’s strongest efforts yet, weaving his rubbery sound into a tapestry of clench-jawed blues, tart tango and hip-hop-inspired grooves. The music was laboratory tested by the ensemble he leads at the Hotchkiss School, the Connecticut boarding school where he has served as director of jazz studies for nearly 30 years. “I write all the music for the jazz ensemble, partly because it’s such a strange configuration of instruments,” Musillami says. “You can’t buy arrangements for two drummers, four alto saxes, one trombone and a flute, and five guitars. So I embrace the weirdness of it. I think it makes me a musical optimist.”

That term aptly sums up Musillami’s approach to so much of his career: maintaining a working trio or running a record label in these trying times requires a healthy dose of optimism, to say the least. He’s already envisioning his next piece for the trio (plus two), and is readying the debut recording by his drumless Pulse Ensemble, with trumpeter-flugelhornist Herb Robertson, Fonda and pianist Madsen. Ultimately, he recognizes how special it is that a group formed with a very loose concept in mind has grown and evolved to the extent that the trio has. “There are so many reasons why groups don’t stay together. Sometimes it’s the music; sometimes it’s personalities; sometimes it’s lack of work. You get out on the road sometimes and you can see that vein on your neck start to pulsate, so if you’re not with people you want to hang with, that can eat away at you and the group. There are a lot of other factors besides just the music in keeping something together. It’s more than I could hope for, to be honest, because I don’t think that it happens that often.” JT

OK, that’s funny, but it also implies a problem. People who dismiss the accordion as soon as they hear it, as soon as it triggers … END_OF_DOCUMENT_TOKEN_TO_BE_REPLACED