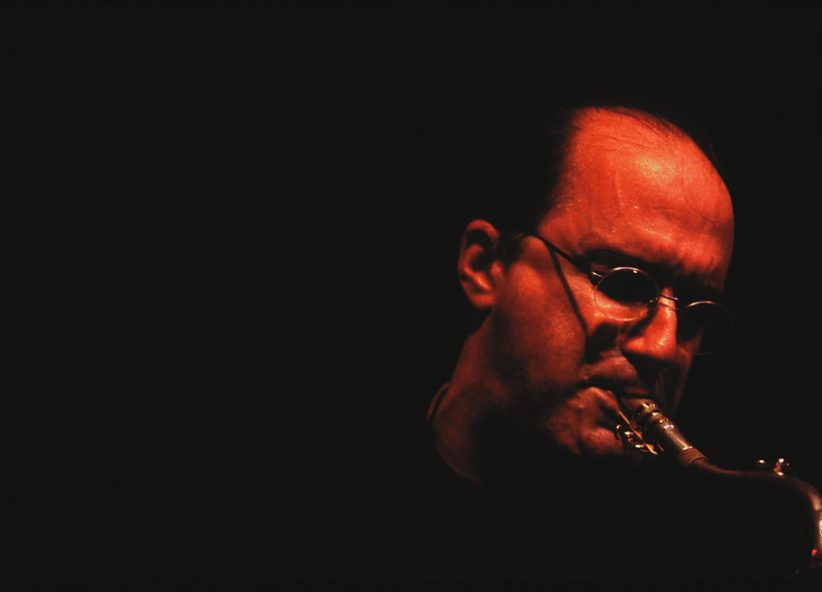 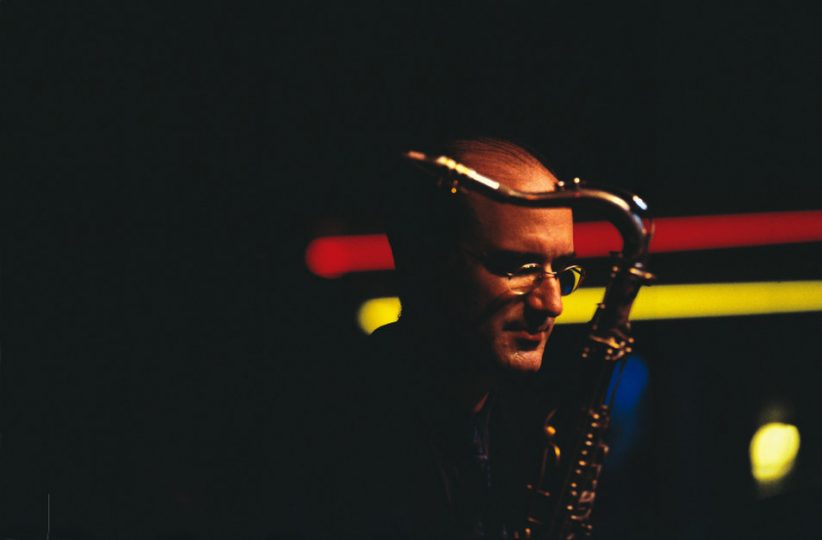 For his new Impulse album, Two Blocks From the Edge, sax titan Michael Brecker had the luxury of going into the studio with his new quartet after developing the material on the road over the past year and a half. “I’ve never done an album that way before,” he says. “It’s always rehearse a couple of days before the record, try and get it together, then you’re in the studio and try to do the best you can. A lot of times that makes for very spontaneous performances. On the other hand, it’s really great to know the music and not have to think about it. And that way you can really be just free to play. The less I have to think about in the studio in terms of notes and heads and all that stuff, the easier it is to record. Consequently, this music went onto tape very easily. It was mostly first takes.”

There’s a very natural, conversational flow happening from track to track, sparked by a highly interactive hookup between drummer Jeff “Tain” Watts, bassist James Genus and pianist Joey Calderazzo. Watts in particular is such a vital part of this dynamic band. His muscular, unpredictable accents and unrelenting sense of swing really serve as a catalyst here, pushing the band through its paces and inspiring some heightened expression by the soloists.

“The unique thing about Tain,” says Brecker, “is he has that conversational ability within his playing which doesn’t interfere with the swing. He gets in there and mixes it up and is constantly feeding you things and echoing things. It’s not so much even echoing, it’s a language that goes on at the same time. It’s in the present. He comes up with such great ideas…backwards kind of rhythms and things. And it makes for very interesting journeys during solos. He always surprises me.

“Tain’s swing is really deep,” he continues. “He sits right up on the drums. He gets that hunkered thing and he grooves with the music. There’s nothing like it. He’s one of those great old-time drummers.”

Unfortunately, with Watts returning to Branford Marsalis’ quartet after being on extended leave, Brecker is in the position of having to find a replacement for Tain on an upcoming tour. “Those are some very tough shoes to fill but hopefully it’ll be just temporary,” says Michael. “It was very fortunate for me that Branford was doing Buckshot LeFonque for the past year and a half, so I was really in effect able to borrow Tain from Branford. But we’ll be together again. I’ve enjoyed the time with him so much and I’m so grateful for the last year and a half to be able to play with him on a constant basis.”

As a bandleader, Brecker has had the opportunity to watch pianist Calderazzo develop from the 21-year-old firebrand he plucked from Long Island obscurity 11 years ago to the fully matured player and composer he is today. “He’s really become a very elegant player,” says Michael. “He’s developed a whole range of dynamics that he never used to have. He can play beautiful ballads and gorgeous solo piano yet he swings as hard as ever. There was never any lack of fire in Joey’s playing. He’s always had that ability…just when you think he’s peaked he can always take it further. But he’s become a really well-rounded pianist in all areas. He has a good overview now, a kind of big picture view of music. When I first started playing with him he was 21 years old and he just kinda wanted to get in there and burn. And now there’s many aspects that he’s developed. Quite frankly, I’ve learned a lot from him and continue to learn from him.”

Calderazzo turns in some typically intense solos on “Two Blocks From the Edge” and Watts’ ferocious “The Impaler,” then settles into a hush on the two lovely Brecker ballads “Cat’s Cradle” and the romantic “How Long ‘Til the Sun,” a phrase uttered by Michael’s four-year-old son Sam in the throes of a week-long spell of dreary, rainy weather.

Brecker himself is right on top of his game, blowing with typical authority on the kind of forceful, darting lines that have inspired generations of players on all instruments. His effortless double time work on the New Orleans-flavored “Madame Toulouse” is breathtaking while his playing on the darker, turbulent title track shows a freer penchant that produces some of his most daring playing on the record. His blues factor comes out in full force on Calderazzo’s loping, Horace Silver-esque pocket groove “Bye George.” The Afro-Cuban flavored “El Niño” has a decided Tyner-ish vibe to it, perhaps inspired by Michael’s extended tour with McCoy in 1995 following the release of the Grammy-winning Infinity. And Michael flexes his signature tenor muscles on Watts’ clave-in-seven vehicle, “The Impaler.”

But the most startling track here, from a purely technical standpoint, is Brecker’s “Delta City Blues,” which opens with an a capella sax intro that is a virtual clinic in intervallic leaping on the instrument. “I’ve been working on a lot of the overtone series of the instrument as well as intervallic relationships, which I’ve been into for years,” he explains. “Joe Allard, who was probably the most important saxophone teacher I had, first exposed me to it. So I was just playing around at home, practicing major and minor scales in the overtone series. And then somehow this thing came out. Then I started playing it live, then I made a tune out of it. Some of the stuff I had been working on for years and I brought that back and put it on the record. Live, it’s extended and it keeps getting longer.”

The opening track, “Madame Toulouse,” he explains, evolved out of some saxophone exercises he had been working on at home. “It came from Walt Weiskopf’s book. I’ve been listening to him quite a bit in the last year or so. He’s really underrated. He’s one of the great players and his book explains his approach. So I was working on some exercises related to his concept and ‘Madame Toulouse’ really grew out of that.”

Generally, Brecker makes up his own exercises based on relationships between intervals. “I keep notebooks and every time I come up with something that I like I write out the idea and I date it. I don’t write out the whole exercise, I just write out the idea of the exercise and maybe a few inversions of it…what harmonic context could apply. And then I practice it for a while. I don’t write it out because I try and think it as I’m practicing it. Rather than read it off the page I try and think of the intervals, think of the notes and get it under my fingers. And I do these exercises in every key. Then I’ll forget it. I’ll just stop and move on. And usually in a couple of months the exercises that I practiced will come out in some other way. They enter the subconscious pool and come out in some way I never imagined.”

Michael’s further investigations of solo sax may indeed lead to a new direction. He recently performed a solo version of “Naima” in Carnegie Hall at a Coltrane tribute and he has plans to perform two solo special performances at the end of this summer in the Italian Alps.

“It’s interesting the way things unfold and the way different forces work together in synchronization,” he notes. “In my practicing at home I had been coming up with interesting things and I had fleeting ideas of doing some kind of solo concert but didn’t really take it seriously. And then I got called to do two solo concerts at the top of a mountain. I was gonna be over there anyway and at first I thought, ‘Naw, I can’t do it.’ But the more I thought about it I realized this would be an interesting thing to try to do, so I agreed to do it. I received a fax a couple days ago saying part of the deal is there is no transportation. You have to walk an hour and a half, two hours to get to where the concert is. It should be interesting. So deciding to do that concert made me look at the whole thing as a possible direction. I never would’ve entertained the thought of doing a solo concert before but all of a sudden all these elements are coinciding. Something is saying, ‘Do it.’ And these Italy concerts are going to be the impetus.”

Not content to rest on his laurels, Brecker is always challenging himself to push further on his instrument. “Challenges are good,” he says. “I’m constantly trying to find new things because I get antsy. I get tired of my own stuff pretty fast. And it takes me a long time to learn new things. Growth is difficult sometimes. It takes a lot of thought and patience.”

Brecker’s latest follows on the heels of his Grammy-winning Tales From the Hudson, an all-star project featuring Pat Metheny, Dave Holland, Jack DeJohnette, Calderazzo and a special guest appearance by McCoy Tyner. The title of the new one, he explains, comes from a phrase associated with the late Don Grolnick. “The record is dedicated to Don, who was my closest friend. Don passed away a couple years ago. He was just a fantastic musician and pianist and composer and he also was famous for his wit. There were all kinds of Don-isms floating around but this was one of them. He used to say that he liked living life close to the edge…as long as it was two or three blocks away. I always liked that.”

Michael plays a Selmer Mark VI tenor saxophone with a Dave Guardala mouthpiece and La Voz medium reeds. He composes at home on a Steinway piano. For the time being, his EWI remains on the shelf. “The EWI has taken a vacation,” he says. “I love the instrument, particularly in areas where I can use it for orchestration. But as a solo instrument, I never found a sound that felt good for me to solo on. Within the Brecker Brothers it was used more as a textural thing. But after three years with Brecker Brothers, I had wanted to get back to more of an acoustic environment. I wanted to simplify and just get back to playing the saxophone.”

At 95, Chicago-based guitarist George Freeman is among the world’s oldest active jazz musicians. Although he came of musical age in the 1940s and counts … END_OF_DOCUMENT_TOKEN_TO_BE_REPLACED

When you’re on TV, everybody knows you, or at least thinks they know you. Take Kevin Eubanks, who was on NBC’s Tonight Show five nights … END_OF_DOCUMENT_TOKEN_TO_BE_REPLACED

Jimmy Katz leads many lives. He is the preeminent currently active jazz photographer, and has shot more than 200 magazine covers and over 600 recording … END_OF_DOCUMENT_TOKEN_TO_BE_REPLACED