Skip to content
Become a member and get exclusive access to articles, live sessions and more!
Start Your Free Trial
Home > Features > Michael Bates and His Power Trio 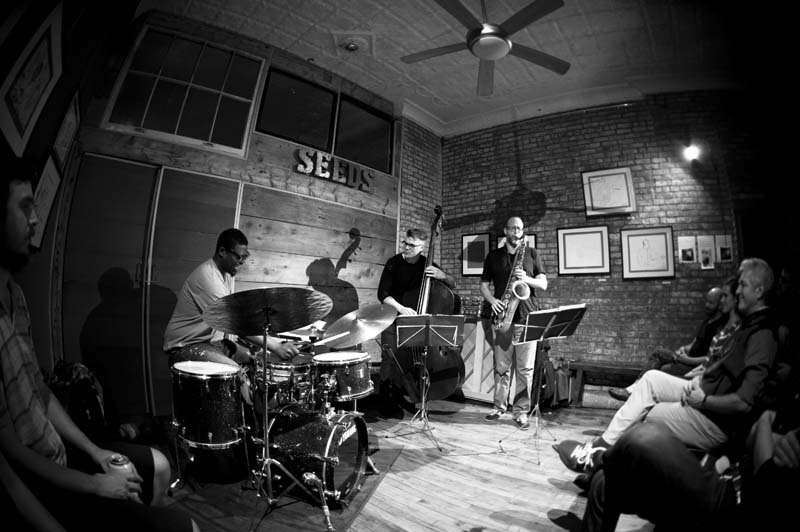 With its lack of a chordal center, the saxophone-bass-drums trio has been applied with equal effectiveness to straight-ahead and free contexts, but it is rarely used in soul orchestrations. On Northern Spy, bassist Michael Bates’ ninth album as a leader and first release with a trio featuring tenor saxophonist Michael Blake and drummer Jeremy “Bean” Clemons, Bates channels Curtis Mayfield, Otis Redding, Donny Hathaway and Blind Willie Johnson to explore soul’s often overlooked connection to the avant-garde.

In the straight-ahead camp, Sonny Rollins and John Coltrane set the precedent on live albums at the Village Vanguard; Ornette Coleman’s Golden Circle trio falls further on the free side of the dichotomy. Dave Holland, Joe Henderson, Scott Colley, Joe Lovano, Tony Malaby, Tim Berne and Fly, the trio of Mark Turner, Jeff Ballard and Larry Grenadier, have all shaped this robust tradition.

For his part, Bates, who grew up in Vancouver and moved to New York in 2002, is as comfortable walking as he is out in the stratosphere. He met Clemons while subbing with tenor saxophonist JD Allen’s trio, whose recent release, Graffiti, continues the legacy of hard-bop angularity established by Rollins. Though Northern Spy gestures toward both approaches, it has more in common with Coleman, Air’s Air Lore or Albert Ayler’s trios with Sunny Murray and a rotating set of bassists. Ayler, the avant-garde’s great spiritualist, proved just how far out soul could go, and Bates casts his project in that vein.

The album, released on Bates’ own label, Stereoscopic, represents a departure from his previous release, Acrobat: Music for, and by, Dmitri Shostakovich, but he situates his work along a continuum. “In terms of the visceral element, Wilson Pickett, Stevie Wonder and Shostakovich are not that far away from each other,” he says.

It was Rollins who initially inspired Northern Spy. In a nod to the tenor frontiersman, “Roxy” repurposes the chord progression to “Doxy,” the Rollins standard. “I had bought East Broadway Run Down, and I’m thinking sketches, wide-open,” says the 45-year-old bassist, sitting down recently after a vinyl-hunting trip to Academy Records in the East Village. “So I started writing with the idea that it would be open in terms of where the band could go.”

Northern Spy doesn’t go quite as far as Ayler’s Spiritual Unity, tempering that no-holds-barred impulse with the harmony of Mayfield and the momentum of Miles Davis’ “great quintets,” another reference point. Composed entirely of Bates originals and one standard, “Days of Wine and Roses,” treated as a sumptuous ballad slowed down almost beyond recognition, the sparse compositions are an exercise in experimentation with restraint, explosiveness without sacrificing a cool aesthetic. Yet playing as slowly as possible, with as few chords as it takes to suggest the blues, creates seemingly limitless harmonic and rhythmic possibilities.

Within the structural limitations, Bates adhered to a threadbare form, relying on implication and improvisation to develop the theme. “If the writing is strong enough, I think that your ear-the listener or the musician-will fill in the rest. A couple of bass notes confer a tonality, and then you have a melody up top. You’re going to hear that chord,” Bates says. The lack of a chordal instrument maximizes flexibility for spontaneous composition in the interplay. “It’s important for me to try to compose from the roots of what I’m hearing on the bass and not get too hung up on the fact that there may be a chord symbol there,” says Blake, who transitions seamlessly from grainy double-time to growling whole notes, “and rhythmically, there is a lot of space between beats, between notes. I think we’re even messing around with our idea of where the down beat is.”

Clemons’ subtle cymbal work and deep pocket complement the rough-hewn texture. “Jeremy is a master tuner of the drums. He focuses a lot on not being in the bass player’s frequency,” Bates recently told Dave Douglas on A Noise From the Deep, Douglas’ Greenleaf Music podcast, which Bates co-hosts.

Northern Spy, named for an apple tree Bates found in the Brooklyn Botanic Garden, evolved out of an audiophile’s commitment to combing the vinyl stacks. Bates wore out the grooves on Hathaway’s Extension of a Man; “Essex House,” named for the hotel outside of which Hathaway died, is Bates’ dirge-like rumination. “An Otis Theme on Curtis Changes” pairs a variation on the descending melody of Otis Redding’s “Good to Me,” from The Soul Album, with “changes” inspired by Curtis Mayfield’s There’s No Place Like America Today. Bates first encountered the Redding song as a member of Blake’s band. “I take a vocal approach to the saxophone,” Blake says. “I’m really into Otis Redding and Sam Cooke. They’re kind of my favorite tenor players.”

Sustaining a groove with so much space is a high-wire act, but the trio ably teases out the “Otis Theme” for nearly 10 minutes. “It’s all about drama, because if you hit an apex and just stay there, that’s dangerous. It’s this static, no-dynamics thing,” Bates says. “We’re all jazz players, so we kind of want to be burning, but-just take your time. Start small and create an arc.” And with Northern Spy, Bates is just getting started. “I want to do Northern Spy, Volume 2,” Bates says. “I realized there’s so much ground.”

When you’re on TV, everybody knows you, or at least thinks they know you. Take Kevin Eubanks, who was on NBC’s Tonight Show five nights … END_OF_DOCUMENT_TOKEN_TO_BE_REPLACED

Jimmy Katz leads many lives. He is the preeminent currently active jazz photographer, and has shot more than 200 magazine covers and over 600 recording … END_OF_DOCUMENT_TOKEN_TO_BE_REPLACED

Take a look at Blue Note Records’ release schedule for 2022 and it’s hard to miss the significant percentage of electronic-oriented music. In March, the … END_OF_DOCUMENT_TOKEN_TO_BE_REPLACED

Those who are only familiar with bassist Martin Wind’s jazz credentials—both as a leader and as a first-call sideman for Bill Mays, Dena DeRose, Ken … END_OF_DOCUMENT_TOKEN_TO_BE_REPLACED