Skip to content
Become a member and get exclusive access to articles, live sessions and more!
Start Your Free Trial
Home > Features > Meshell Ndegeocello: Master of the Mood 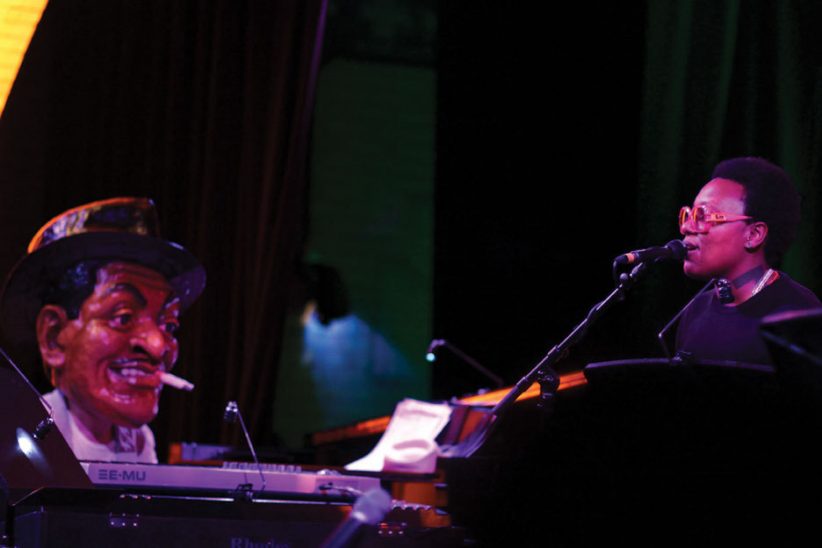 Meshell Ndegeocello and Jason Moran (in mask) at Harlem Stage, May 2011. Photo courtesy of Harlem Stage 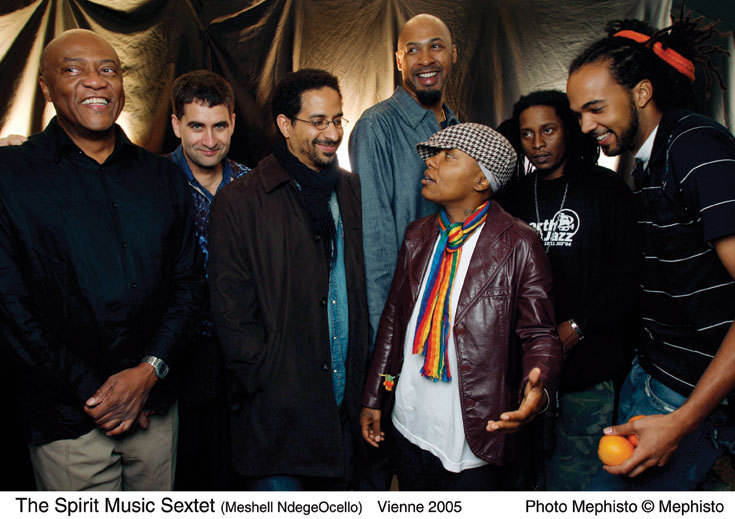 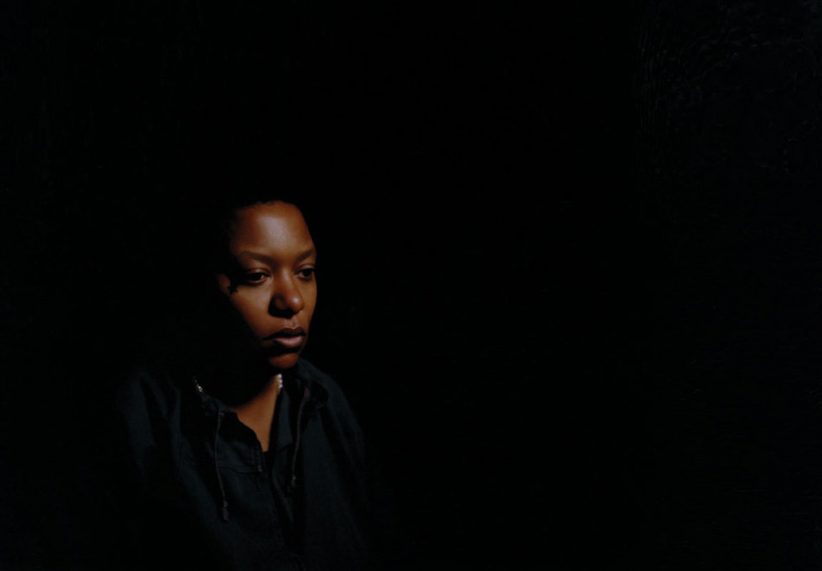 “I’m just a soul whose intentions are good.” The crowd at New York’s Highline Ballroom knew the next line well before Meshell Ndegeocello delivered it: “Oh Lord, please don’t let me be misunderstood.”

Nina Simone began her 1964 album Broadway-Blues-Ballads with that song, shortly before the Animals covered it and landed a major hit. Ndegeocello, the uncategorizable bassist and singer-songwriter, also chose it to kick off her new release, Pour Une Âme Souveraine (For a Sovereign Soul): A Dedication to Nina Simone (Naïve). But at the Highline in mid-October, she saved it for the encore. Just before the opening riff she proclaimed it to be her theme song.

The show was thick with echoes of rock, soul, gospel, even country, all tied together with Ndegeocello’s sense of deep and atmospheric groove. Lizz Wright, Toshi Reagon and Cody ChesnuTT, three featured singers on the disc, proved even more powerful live. Guitarist Chris Bruce wrung tasty sounds all night from his electric and acoustic guitars, propelled by the spot-on drumming of Michael Jerome and the subtle, enveloping keyboards of Jebin Bruni. Ndegeocello played bass and sang, leading with assurance but never really dominating the stage.

“Sorry if I sound like I have a shtick. People ask me about this Nina Simone thing, but she’s dead and I’m not her spokesperson,” said Ndegeocello roughly two weeks before the gig, from her home in upstate New York. “The goal is to have you look at all the aspects of her life.” Well, for one thing, Simone was misunderstood, and the parallels to Ndegeocello’s career aren’t hard to draw: both politically outspoken singers with serious instrumental chops; both relevant to jazz but not defined by it; both gaining a measure of pop stardom but ultimately declaring independence from the miseries of the music

Ndegeocello mentions the book I Put a Spell on You: The Autobiography of Nina Simone and remarks, “[Simone] essentially said, ‘I’m not a jazz musician, but I’m a person of jazz: I want to live my life and have the freedom, the mind of a jazz musician.’ I admire that. I’m never going to be a virtuosic soloist, but I can improvise on groove and arrangement, I can improvise the song. That’s where I feel my heart is really close to jazz.” Yet Ndegeocello’s track record in jazz remains underappreciated, a seldom-told story-from her 2005 instrumental release, The Spirit Music Jamia: Dance of the Infidel, to her bass playing on CDs such as Steve Lehman’s Demian as Posthuman, Nguyên Lê’s Purple and Daniel Freedman’s Bamako by Bus, to her role as producer of Ron Blake’s Sonic Tonic and Jason Lindner Gives You Now vs. Now.

For many a music fan, Ndegeocello defined A decade with her first two albums, Plantation Lullabies (1993) and Peace Beyond Passion (1996). These were extraordinary epics, steeped in R&B and hip-hop but free of genre clichés. They exploded with fierce funk, high-level songcraft and brilliant musicianship from the likes of Geri Allen, Joshua Redman, David Fiuczynski, Bennie Maupin, Gene Lake and many others. Ndegeocello was herself an ear person, not schooled in theory but still able to summon the most sophisticated and beguiling harmonies. “You couldn’t get by as a straight rock or pop player,” says Fiuczynski of his time as a band member. “You had to know changes.”

At the same time, her songs had the hooks, beats and strong melodies that spell pop appeal. (The albums were released on Madonna’s Maverick label, after all.) Ndegeocello had a breakout hit with 1993’s “If That’s Your Boyfriend (He Wasn’t Last Night),” and to watch the video today is to be reminded that history goes in cycles. A jazz-savvy female bassist and vocalist gaining exposure with a mass audience-sound familiar?

When you’re on TV, everybody knows you, or at least thinks they know you. Take Kevin Eubanks, who was on NBC’s Tonight Show five nights … END_OF_DOCUMENT_TOKEN_TO_BE_REPLACED

Jimmy Katz leads many lives. He is the preeminent currently active jazz photographer, and has shot more than 200 magazine covers and over 600 recording … END_OF_DOCUMENT_TOKEN_TO_BE_REPLACED

Take a look at Blue Note Records’ release schedule for 2022 and it’s hard to miss the significant percentage of electronic-oriented music. In March, the … END_OF_DOCUMENT_TOKEN_TO_BE_REPLACED