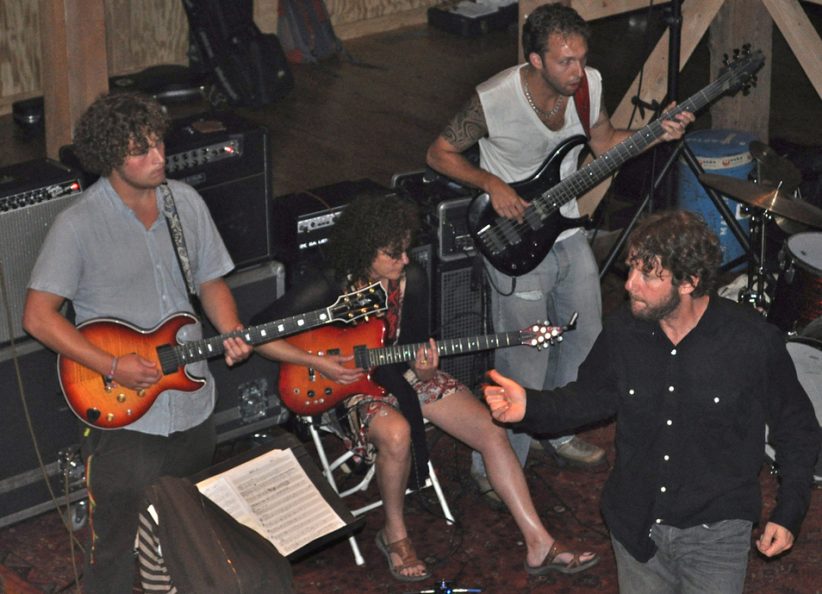 On the afternoon of Aug. 4, in a cozy basement parlor in the Catskill Mountains of New York’s Hudson Valley, drummer Billy Martin talked to roughly a dozen students about a lot of things. He dropped names like John Cage and Stockhausen; he brought up the neurological phenomenon synesthesia. He spoke about transcribing birdsongs and using paintings as scores. It all circled back to talk of visualization and how it relates to free improvisation or, rather, spontaneous composition.

A teenaged piano player volunteered to give it a go. “I don’t want to hear anything that sounds familiar,” Martin encouraged. So the kid launched into something resembling George Shearing at soundcheck, demonstrating precocious technique but not soul-searching creativity. Martin stopped him. “Don’t take me to some smoky jazz club,” he said, and the student started again. The chording became more wistful, the attack at once pensive and cathartic, the young man entranced. We were way out of that basement parlor, and that smoky jazz club, and closer to the Cologne Opera House in 1975, with our volunteer playing the role of Keith Jarrett whether he knew it or not.

I experienced similar scenes throughout my two days at Camp MMW, a five-day program that has for the past four summers taken place at the bucolic, inviting Full Moon Resort in Big Indian, N.Y. Given by its namesake trio of keyboardist John Medeski, drummer Billy Martin and bassist Chris Wood, a jam-scene favorite that made its name meshing jazz training with danceable rhythms, the camp occupies a singular nook on the jazz education landscape: part Berklee Summer Session, part Rock ‘n’ Roll Fantasy Camp and part spiritual retreat-an “anti-camp,” as Medeski calls it. “Everything that we weren’t taught we want to teach to people,” he explains. “I [went through] the whole deal: studied, went to music camps, went to conservatory, graduated, and I realized how much I had to unlearn to actually become a musician again. So we’re here to help people not go through that.”

The camp sessions I sat in on included more technical instruction than Medeski’s words imply-I did see him bust out a dry-erase board and give an honest-to-God theory lesson-but for the most part the daily workshops, ensembles and master classes focused on big-picture stuff. At Wood’s Thursday discussion, for example, he demonstrated a useful tool for internalizing polyrhythms, wherein you do a sort of salsa step while clapping. “In a way what we’re offering is for anyone at any level,” says Medeski, and Wood’s exercise certainly fulfilled that sentiment. At the anti-camp were some guest anti-clinicians, each of whom led a master class and accompanied MMW during one of their nightly performances: guitarist Vernon Reid, drummer Bob Moses and Bachir Attar, leader of the Master Musicians of Jajouka, the Moroccan flute-and-drum choir of Ornette Coleman’s Dancing in Your Head fame.

However you define the philosophy, it made an impression. “[Other camps and clinics I’ve attended] concentrated more on technique and what seems to me now like a more superficial level of music,” said John Korchok, 58, a web developer from New Jersey who plays baritone sax. “But here we’ve gotten into the real basics of music and polyrhythms, with exercises that [resemble lessons] you’d teach to school kids, but on a higher level.”

The students seemed elated, and they spoke often in terms of rediscovery. Of course, there were nonmusical things to be excited about as well, namely the food, which trumped that of my richest friends’ weddings. But mostly the attendees gave the impression of music diehards who paid some decent coin-$1,100 to camp on the grounds; $2,000 for lodging-and had their expectations surpassed. My expectations of them were certainly exceeded.

Based on my own jam-band prejudice, I envisioned a room full of stoned, well-heeled Connecticut kids vamping into oblivion. Not so. Many of the “kids” weren’t kids at all, but a few dozen men and three women, ranging evenly from teenagers through middle-age. They came from all over-the U.S. but also Canada, France and Japan-and many of them could play. (The instrumentation worked out too: a lot of rhythm section but also flute, cornet and saxophones.) And there were a surprising number of professional and semi-professional musicians, like 36-year-old Mac Himes, a jazz-studies instructor at Penn State. The common bond here was fandom: These people really dig MMW, and via the ensembles got to add their initial to the mix. Well, kind of.

Each bandmember led a mid-size group with a rotating cast, and each took a different tack. On the final night, they performed. Medeski’s band was the most complete and polished, interpreting charts and writing its own changes. (He also led a demonic-sounding melodica ensemble through Monk.) Wood’s group strategized with rhythms and riffs using numbered phrases and Martin’s riddim notation system, while Martin himself simply got down. The drummer’s game plan was heavy on groove and solo space, and he conducted via hand signals à la Adam Rudolph. When things bordered on the transcendent-when the rhythm section funked out while the horns partook in collective free improv-Martin danced. It wasn’t anything most university jazz band directors would even think of doing, and maybe that was the point.

When you’re on TV, everybody knows you, or at least thinks they know you. Take Kevin Eubanks, who was on NBC’s Tonight Show five nights … END_OF_DOCUMENT_TOKEN_TO_BE_REPLACED

Jimmy Katz leads many lives. He is the preeminent currently active jazz photographer, and has shot more than 200 magazine covers and over 600 recording … END_OF_DOCUMENT_TOKEN_TO_BE_REPLACED

Take a look at Blue Note Records’ release schedule for 2022 and it’s hard to miss the significant percentage of electronic-oriented music. In March, the … END_OF_DOCUMENT_TOKEN_TO_BE_REPLACED