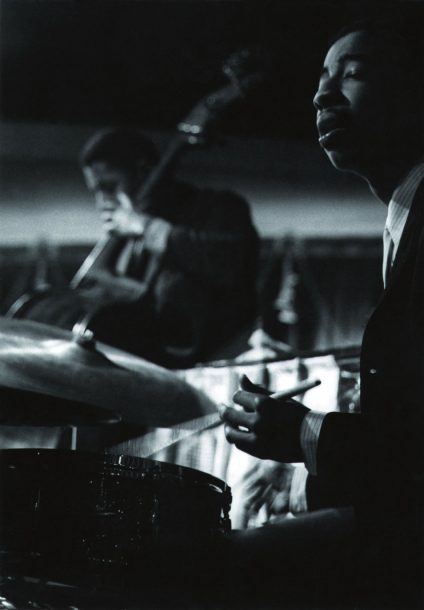 The recent, unexpected death of master drummer Anthony Williams came as a terrible shock to his family, friends, and music lovers everywhere. On Thursday, February 20, Williams, after complaining of stomach pain, was admitted to the hospital for gall bladder surgery. On Sunday, February 23, while recuperating from surgery, he apparently suffered a fatal heart attack. He was 51. Many of Williams’ friends and colleagues in the New York area did not learn of his passing until a few days later, when WKCR, the jazz radio station broadcasting from the campus of Columbia University, began playing Williams’ recordings around the clock in tribute.

We at JazzTimes mourn Tony’s passing, which is indeed a devastating loss. Best known for his work in the ’60s with the Miles Davis quintet, which he joined when he was only 16, Williams also dabbled in fusion in the ’70s with his supercharged organ trio, Lifetime, which featured B-3 master Larry Young and introduced guitarist John McLaughlin to the masses. In the ’80s he led a quintet that featured up-and-coming musicians, including trumpeter Wallace Roney. Recently, he had come closer than ever to realizing a lifelong dream, to be recognized for his abilities as a composer and arranger as much as for his brilliant, groundbreaking work as an instrumentalist. His last CD, Wilderness (Ark21), showcased his writing for a full orchestra, as well as for an all-star quintet with Michael Brecker, Pat Metheny, Herbie Hancock, and Stanley Clarke.

On March 10, I spoke with Williams’ friend and mentor, Percussionist Emeritus, Max Roach. “He was beautiful, absolutely beautiful,” is how Roach remembered him. “Serious, challenging. You know, he had an edge to him, personally and in his work. An edge, like he wasn’t afraid to try things. What he played, it’s unexplainable in words.”

What follows are Roach’s comments on a few facets of Tony Williams’ astonishing life and career.

On meeting the young Tony Williams for the first time:

Well, it was in Boston. His father used to bring him to the clubs in Boston. His father was a saxophone player. His mother gave him permission to come down and visit me one summer. His mother was a friend of Abbey’s, and I was married to Abbey at the time. [Ed. note: jazz vocalist Abbey Lincoln.] He stayed in our place. He was about 15 or so. We went out to a session one night, and Jackie McLean heard him, and next thing you know, a year or two later, he was working with Miles.

The young impression of Tony was that he could sit in with any of the bands, and he knew everything we were all playing. He could play the arrangements with Clifford Brown, when I had the band with Clifford Brown. He was fast. Next thing I know, he was out there, makin’ waves, and not just makin’ waves, but also doing things that the rest of the guys weren’t. He was adding to the techniques, and the repertoire, and the conception, and dealing with the drum set itself, as a young player.

On Tony Williams, the teenage prodigy:

He had something that was definitively his, that was an offshoot of the things that he had heard everybody else do. You know, the drum set is a relatively new instrument in itself. Itís like the four-limbed monster, you know, you have to deal with it with the four limbs of the body, and Tony conquered it at a young age. He conquered the instrument at a young age, and in his own way.

You know what happens with people who have that kind of talent; it happens at an early age. Like Miles and them, you know, Charlie Parker, when they were young? For some reason-and if anybody knew the key to that they’d do it-but that’s what happens. And Tony had that. He had that. And it doesn’t come because somebody just granted you that. You work for it. Tony practiced, and listened to records, and gave it everything he got.

So-called prodigy or genius, exhibited at a young age, is because a person has worked for it, he’s put the time in, and so forth and so on, and then he’s in the environment. Tony’s father was a musician. He was in Boston at a time when Boston was swingin’, they had all those clubs. And his dad would take him to the clubs to listen, and sit in with people. He was handling the drums then, before his feet could touch the ground, touch the pedals.

After he got with Miles, of course, Miles laid down the laws. You know, ‘you can’t join the throng until you write your own song.’ We all knew about that, and that meant that you now had to find something that’s you. He did that, and he did that by embellishing and dealing with things that other drummers dealt with.

On Tony Williams’ originality and individuality:

It’s not about comparative things: who’s the fastest, or…It’s not about that. It’s about someone who, when you hear them, you say, Oh, that’s Tony! Oh, that’s Miles! Ah, that’s John Coltrane! That’s what it’s about. Oh, that’s Monk! You know, Monk doesn’t sound like Art Tatum…

All of us are influenced by our environment. Working around folks like Miles, and being born at a time when the dominant figures were people like Elvin and Klook [Kenny Clarke]-I hear a little bit of all of that. But what Tony did, he dominated, and he brought himself to it. I hear Art Blakey in him, you know. What he did with the high-hat, it was a Blakey-ism, but what Tony did with it was different.

In its near-century of excellence, The New Yorker has been home to more than its share of tops-in-their-field contributors. There’s E.B. White, with his luminous … END_OF_DOCUMENT_TOKEN_TO_BE_REPLACED

Put a “the” in front of a name and it acquires historical heft. The Thelonious Monk who entered New York City’s WOR Studios as Halloween … END_OF_DOCUMENT_TOKEN_TO_BE_REPLACED

On the enchanted evening of August 16, 1958, Ella Fitzgerald took to the stage of the legendary Hollywood Bowl. There, with a lustrous orchestra conducted … END_OF_DOCUMENT_TOKEN_TO_BE_REPLACED

Be careful what you wish for.  By the beginning of 2020 guitarist Mary Halvorson, one of the most acclaimed musicians of her generation, was also … END_OF_DOCUMENT_TOKEN_TO_BE_REPLACED