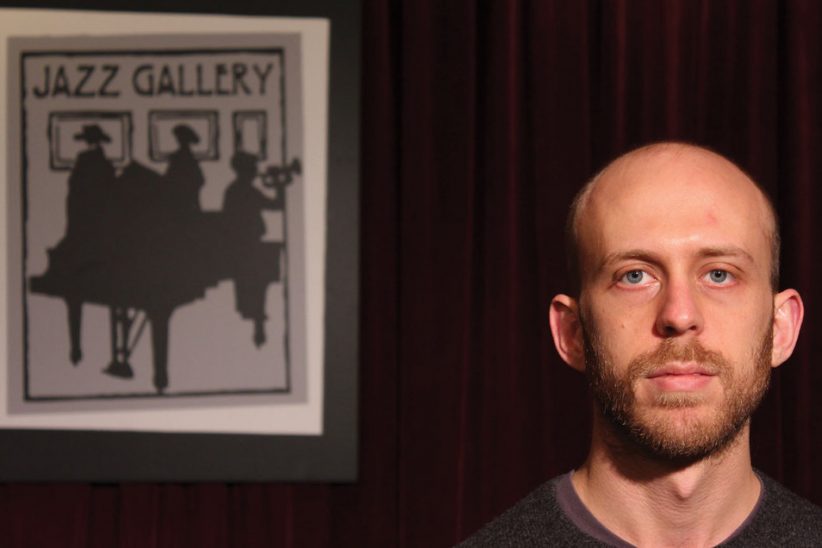 It’s Wednesday afternoon, Jan. 12, and as he’s done for the past four days, bassist Matt Brewer unlocks the metal gate to the Jazz Gallery and climbs the steep set of stairs to its darkened performance space. It’s still early in his two-week stint as composer-in-residence, but a new tune has already begun to gel.

As Brewer often does when he has a break from the road (in the preceding months he’s toured Japan, Italy and Cuba as a member of pianist Gonzalo Rubalcaba’s trio), he eases into composing mode by sitting down at the piano and playing some Mozart, or perhaps a Bach chorale. Inevitably, he explains, something will catch his ear-maybe an intriguing harmonic interval or contrapuntal passage-that sparks the inspiration for a new tune.

To illustrate, Brewer walks over to the Jazz Gallery’s Baldwin grand and plays a couple of bars of a Mozart fantasy he’d been fooling around with a few days earlier. At one point, he explains, he “stumbled across a sonority” he liked. Soon, he found himself focusing on a single chord. “I began playing it differently each time, and that pretty much started the process of composing.” Fascinated by Mozart’s extraordinary sense of form, he also set himself the task of pushing beyond traditional AABA structure.

Situated on the far west side of Lower Manhattan, the Jazz Gallery is a nonprofit organization whose generous white-brick loft also serves as a gallery for jazz-related art and photography (hence the name). Unlike most Big Apple jazz venues that struggle to make their monthly nut with hefty admissions and pricy drinks, the Jazz Gallery survives through a combination of annual membership dues and modest ticket prices, along with private and public grants from the likes of the NYC Department of Cultural Affairs, the Jerome Foundation and Kickstarter.

In addition to producing approximately 180 nights of live music each year (mostly by New York’s best 20-to-30-something jazz performers), a hefty portion of the Jazz Gallery’s resources is devoted to a series of annual residency commissions, which provide funding for recipients to take a break from hustling gigs and spend a couple of weeks at the venue creating, rehearsing and performing new material. This year’s grants, organized under the banner “Leading From the Bass,” have been awarded to the up-and-coming bassists Joe Sanders, Alexis Cuadrado, Linda Oh and the 29-year-old rhythm section stalwart Matt Brewer.

According to Executive Director Deborah Steinglass, the Jazz Gallery’s primary mission of supporting “emerging artists”-those making the often head-spinning transition from buzzed-about sideperson to noted bandleader-is precisely what made Brewer a prime candidate for inclusion in its 2012 series. And if history is any guide, the organization’s investment should be a profitable one, since previous commission recipients like Ambrose Akinmusire, Dafnis Prieto and Miguel Zenón have gone on to recording contracts and major awards.

Although Steinglass doesn’t minimize the financial component of the Jazz Gallery commissions-$7,000 for a full four-week residency-she insists that saying yes to the creative aspirations of young musicians is even more crucial. “Basically,” explains Steinglass, “we give them the keys and they can use the space however they need: to compose, rehearse or record.”

For Brewer, who makes do with an old analog electric keyboard in his cramped Brooklyn apartment, the luxury of a quiet room with a well-tuned grand piano has gotten his creative juices flowing. “It’s so much more inspiring,” he explains, “and I don’t have to worry about disturbing the neighbors.”

Born into a musical family (his father, Paul, is a jazz trombonist and music educator), Brewer was something of a child prodigy. By the age of 12, he was supplementing his classical bass lessons with paying jazz gigs in his childhood home of Albuquerque, N.M. When he was 16, Brewer anchored a quartet of jazz wunderkinds in a blistering (if brief) rendition of Monk’s “Straight, No Chaser” at the Grammys (check it out on YouTube). After graduating from Michigan’s Interlochen Arts Academy, he came to New York to attend Juilliard’s new jazz program; but after two years, the demands of his burgeoning professional career forced him to drop out.

Typically, Brewer and his Jazz Gallery peers alternate sideman and leader duties in different configurations, as they discover common ground in what Brewer describes simply as their “openness,” not only to the entirety of the jazz tradition, but also to a host of other sources, from classical to rock, pop and indigenous music from around the world. During the course of a brief conversation Brewer cites influences including African Pygmy music, early Weather Report, the batá drumming of Cuba’s Santeria sects, Iranian folksongs, ’80s pop and, of course, the blues.

After opening with an early, untitled Brewer tune, the band launches into the multi-section composition he’d begun developing at the start of his residency. At first hearing, however, the piece, also untitled (“I’m just not very good with titles,” Brewer confesses), doesn’t sound very Mozart-ian. It opens with a free, rubato collective intro, but gradually a knotty melody begins to take shape. Following another ensemble passage, Lehman launches a series of short abstract phrases that construct, and deconstruct, elements of the theme into a rigorous solo set against a churning backbeat. Like his bass heroes-Jimmy Blanton, Oscar Pettiford, Wilbur Ware, Paul Chambers-Brewer uses the full range of his instrument to create a rhythmically assertive counterline while projecting a room-filling resonant tone.

The set continues with a stately, anthemic composition (appropriately titled “Anthem”) from Brewer’s back catalogue, followed by an ad hoc blues that provides the rare opportunity for some soulful walking lines. Brewer closes out the program with a romantic, noirish-sounding tune he composed on guitar just two nights before the show.

Asked later about the challenges and opportunities Brewer’s music presents for performers, Lehman explained that the compositions require “everyone in the ensemble to think about improvisation and group interaction in new ways,” but also provide “the space for everyone to do what they do best, and assert their own personality.”

Having brought his residency to a successful conclusion, Brewer’s respite from the road has also come to an end. His next stop is Montreal, where he’ll join the alto saxophonist Will Vinson. From there he flies directly to Poland for a gig with Ambrose Akinmusire, followed by a March tour with Steve Coleman, and then a quick trip to South Africa for some dates with tenor sax powerhouse David Sánchez. Brewer may not be “leading from the bass” again for a while, but he’s already established himself as a leading bassist. Originally Published April 11, 2012

When you’re on TV, everybody knows you, or at least thinks they know you. Take Kevin Eubanks, who was on NBC’s Tonight Show five nights … END_OF_DOCUMENT_TOKEN_TO_BE_REPLACED

Jimmy Katz leads many lives. He is the preeminent currently active jazz photographer, and has shot more than 200 magazine covers and over 600 recording … END_OF_DOCUMENT_TOKEN_TO_BE_REPLACED

Take a look at Blue Note Records’ release schedule for 2022 and it’s hard to miss the significant percentage of electronic-oriented music. In March, the … END_OF_DOCUMENT_TOKEN_TO_BE_REPLACED