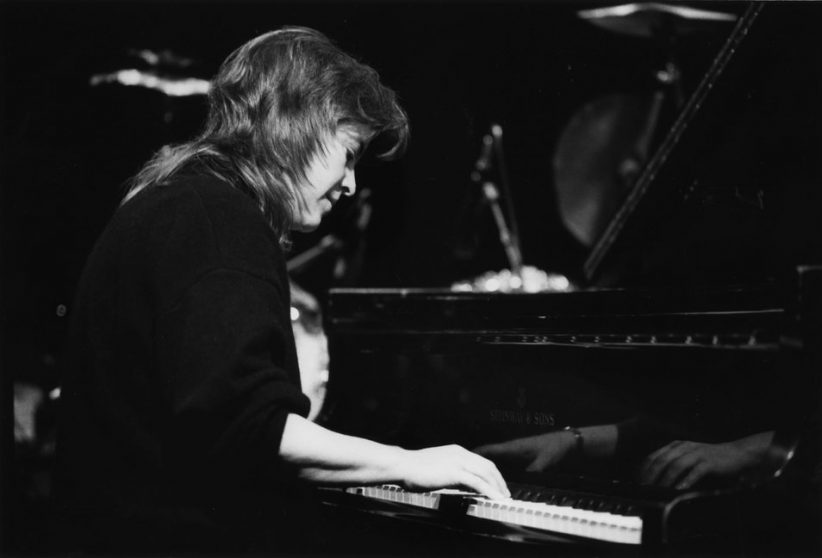 Anyone with a cursory familiarity with the music of Marilyn Crispell and the aesthetics of Manfred Eicher is bound to experience at least a moment of cognitive dissonance at the idea of the uncompromising avant garde pianist recording for ECM. What common ground could Crispell and the intensely focused founder of the Munich-based label possibly find, allowing the pianist an unprecedented forum for her often riveting music, and giving Eicher an album that would be consonant with the bulk of the label’s output?

They found extremely fertile terrain in the music of Annette Peacock, who, despite making several intriguing albums featuring her voice, piano, and compositions, remains best known as the writer of many of the most arresting items in pianist Paul Bley’s discography. Peacock has a rare ability to cut to the emotional quick of the material within just a few notes, to extract a graceful lyricism from the most irregular, fragmentary line and to make silences scream and beckon.

For Eicher, Peacock’s music provided a line of continuity to some of ECM’s earliest and most enduring albums, such as Bley’s masterful solo program, Open, to love. For Crispell, her immersion into Peacock’s music coincided with her reassertion of a plainspokeness in her frequently complex, challenging compositions and improvisations.

The resulting album-Nothing ever was, anyway-is a triumph of the potentially corrosive collaborative process. This was a project that would have steamrolled a less assured artist, as Crispell was working with an exacting composer, arguably the strongest willed, hands-on producer in the industry, and two musicians with decades-long experience with Annette Peacock’s music-bassist Gary Peacock and drummer Paul Motian. Yet Crispell clearly emerges as first among equals on this extraordinary two-disc album. (Eicher’s decision to expand the album to two discs in mid-production speaks to the captivating quality of the music).

Using Bley’s interpretations and some of Crispell’s recent albums to triangulate (particularly her two solo albums on Music & Arts, The Woodstock Concert and Contrasts, and a trio disc with bassist Anders Jormin and drummer Raymond Strid, Spring Tour, on the Swedish Alice label), it becomes plain that Crispell has adroitly brought an unvarnished emotionalism to an arcane body of work, a quality that is increasingly important in her work. What is especially striking about Crispell’s interpretations is her acute awareness that the pathos of Peacock’s music is prone to over-inflation; accordingly, she frequently uses, compared to Bley, a deliberate attack to let the intrinsic dramatic qualities of Peacock’s music unfold in the resonance of ECM’s patented engineering.

Strangely, this development in Crispell’s music has not been welcomed among Europe’s more hard-line orthodox avant garde critics, who all but threaten excommunication for Crispell’s inclusion of works by Peacock, Coltrane and Bill Evans in her recital repertoire. In a perverse way, the stereotypes Crispell shattered with her ascent through the almost exclusively male ranks of the avant garde, have transmogrified to pose a new double standard. Interpreting standards is perfectly OK for an Anthony Braxton (Crispell held the piano chair in his classic quartet for over a decade), but, it smacks of heresy when Crispell performs or records “The Night Has A Thousand Eyes” or Evans’ “Time Remembered” (both are included on Contrasts). The irony is particularly pungent given that Crispell continues to make bristling recordings with such iconic units as the trio of saxophonist Evan Parker, bassist Barry Guy and Paul Lytton (Natives And Aliens: Leo) and the Guy-directed London Jazz Composers Orchestra (Three Pieces For Orchestra; Intakt)

“On a certain level, you can’t win no matter what you do, so I have to please myself and be honest with myself,” Crispell recently remarked with a matter of fact, I’ve-seen-it-all-at-least-once composure (a more pressing concern for Crispell at this writing was the logistical maze of traveling to Archangelsk, Russia to perform with two Soviet-era pioneers-saxophonist Vladimir Rezitsky and former Ganelin Trio percussionist Vladmir Tarasov). “If I play music that I am commonly associated with, some people will criticize it for being avant garde with a capital ‘A.’ If I play more lyrical material, some people have problems with that. Somebody will always hate what you do, but hopefully somebody will love it, too.

“I think the lyrical areas of my music have always been there, but I have been allowing myself to develop them in the past few years, and the project with Annette’s music is an important part of that process. It has to do with opening up as a human being and letting that vulnerable part of myself emerge. I don’t know why that is happening now, entirely; maybe because I’m getting old enough that I don’t care what anybody thinks, and I’ll do what I damn well please. When I started in this business, it was very important to come out fighting in the most intense way I could, so I could be heard and accepted. Now, I don’t feel I need to do that at the same level…

“When I first heard Annette’s music on the Paul Bley record, Mr. Joy, it jumped out at me. I was struck by its similarities to contemporary classical music. She goes to very unexpected places. She’s very original. Annette says she is self-taught, but she’s had a lot of influences from classical music and jazz. Her mother was a violist in a symphony orchestra, so she has had all of this music in her background and her ears. But Annette’s concept is very original. I don’t think I could ever do what she does. I have certain things sewn in my head-“A” goes to “B” and “B” goes to “C.” That’s a very hard thing to get rid of. But, Annette is coming from a totally different, clean-slate place, where “A” goes to “Q” and “Q” goes to “G minus H plus Z,” and it works.

“There’s also the thing about being a woman. She’s said on occasion that my being a woman affected the way I related to her music. I know that almost everything she has written is a song with lyrics about specific emotional circumstances. Even though my music is not about particular emotional circumstances, I like to think it goes deep and connects with all that. That’s why her music spoke to me because it goes deep and bypasses everything that is superficial…

“I had transcribed ‘Gesture Without Plot’ from one of Paul’s records, so when I heard she had moved to Woodstock, I wanted to check the correctness of the transcription, and I contacted her. Luckily she had heard of me from musicians like (free improvising drummer) Roger Turner in England, where she had lived for 20 years. We began to hang out and she would play some of her earlier recordings, which are great. I presented the idea of doing a solo piano record of her music to her; she suggested doing something with Gary (Peacock), who lived nearby, and then the idea evolved into the idea of a trio that included Paul (Motian), who I had played with years ago.

“I invited her to become intimately involved with the project. Since she was the composer, I wanted to play them the way she wanted them to be. Her scores look like pieces of classical music, although some of the pieces have chord changes written in. She’s very particular about the voicings and the tempo. She says they are songs and should be played as songs, not laborious, slow and overdone. Annette wanted this to be the definitive recording of these songs, so she worked with me a lot on the interpretations and she conducted many of the pieces at the recording sessions, so that the tempos, the time changes and the rubatos could be exactly the way she wanted. Her conducting worked very well for me. Looking back, it would have been very difficult to imagine doing it without her. It would have been a totally different project…

“It was close to a year from having the concept, contacting Manfred Eicher at ECM, and recording the music. Manfred’s contributions as a producer were incredible. He had some ideas I never would have thought of, such as the tone of the improvisations for several pieces. On one very delicate slow piece, I had wanted to do an improvisation that continued that feeling, but he had the idea of doing something completely different. I was unsure that it would work, even as I tried it, but after I heard it back, I thought it was a brilliant idea. He also had some strong ideas about the placement of the pieces on the CD.

“I would have tended to do slow-fast-slow-fast, and he suggested putting several slow pieces and some faster pieces together, which really brought a special order to the CD. We did two versions of ‘Nothing Ever Was, Anyway,’ and liked both of them, so Manfred put one at the beginning and one at the end, comparing it to ‘The Goldberg Variations,’ where you return at the end to the opening theme. But, with Annette’s music, you’ve arrived at a totally different place.”

Put a “the” in front of a name and it acquires historical heft. The Thelonious Monk who entered New York City’s WOR Studios as Halloween … END_OF_DOCUMENT_TOKEN_TO_BE_REPLACED

On the enchanted evening of August 16, 1958, Ella Fitzgerald took to the stage of the legendary Hollywood Bowl. There, with a lustrous orchestra conducted … END_OF_DOCUMENT_TOKEN_TO_BE_REPLACED

Be careful what you wish for.  By the beginning of 2020 guitarist Mary Halvorson, one of the most acclaimed musicians of her generation, was also … END_OF_DOCUMENT_TOKEN_TO_BE_REPLACED

Guitarist Will Bernard bears the bittersweet blessing of virtuosic skill and eclectic taste, making his music a perpetual delight and yet hard to categorize. Maybe … END_OF_DOCUMENT_TOKEN_TO_BE_REPLACED