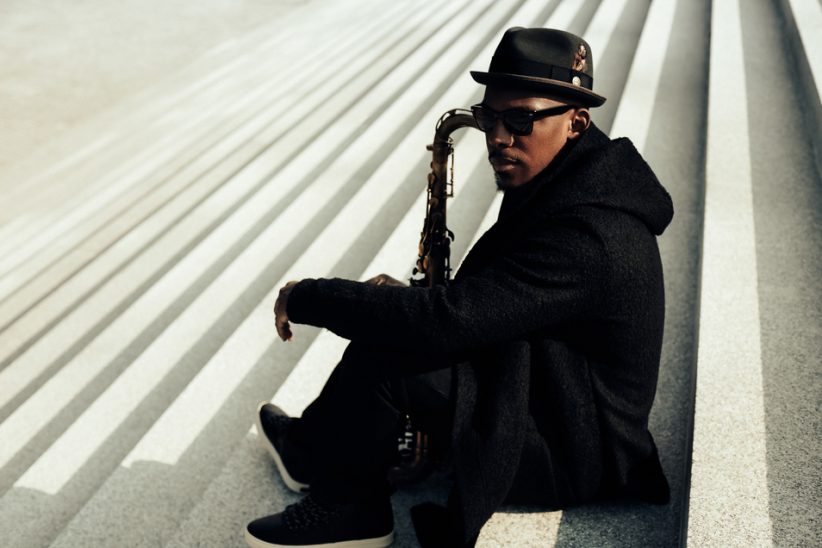 Nihil Novi, the title of saxophonist-composer Marcus Strickland’s latest album, translates from Latin as “nothing new.” But rather than being an indictment of the state of jazz music, that phrase, a biblical reference he absorbed as a boy, refers to Strickland’s philosophy on how good music gets produced: by combining pre-existing elements in new and inspired ways.

“A lot of times, we get so caught up trying to create something new out of the blue. I think nothing really manifests itself that way,” Strickland says. “I think most of the things that we consider novel are really just a composite of three very important ingredients, one of the ingredients being somebody had a vision, the second being that person trying to imagine how that vision relates to the world around them. And the third is, of course, execution. As long as people apply that to anything they’re trying to do, they’re not caught up in trying to come up with something absolutely new; they’re trying to come up with something that’s genuine.”

For his new album, his first for Blue Note/Revive Music after releasing several projects through his own label, Strickland had a genuine combination of ideas in place. A fan of the hip-hop production of J Dilla, Madlib and White Lotus, he created beats of his own and used a set of them as the foundation of a new batch of songs. He asked musician Meshell Ndegeocello to produce the sessions, which feature a rotating cast of players including singer Jean Baylor, pianist and fellow Blue Note artist Robert Glasper and trumpeter Keyon Harrold. The results yielded some heavy, live grooves, with ample room left for both blowing and thoughtful commentary on timely issues.

Raised in Florida and based in New York, Strickland, 37, has worked as a leader of groups of varying sizes, and as a sideman to Roy Haynes, Dave Douglas and Jeff “Tain” Watts, among others. When creating Nihil Novi, he was more concerned with reflecting the world around him than with adhering to a specific style. “For jazz musicians, for musicians, or whatever we call ourselves, I think it’s important to not limit ourselves by the labels that are applied to our art form,” he says. “The art came first, then came the label. That’s a very important thing. I think it’s very liberating to think that way.”

Some jazz musicians still might disparage beat making, but Strickland views it as an art. “It definitely takes a lot of creative juices to make music out of something that’s already made, and also make music that is so short in terms of new material,” he explains. “It keeps on repeating, looping and looping.” As he talks about minutiae, such as the velocity of hi-hat strokes, how the sound of a particular track could use a “dustier” hi-hat sound, or ways to make the beat sound more human, parallels can easily be drawn to an improviser absorbing all the possibilities of a chord progression.

Harrold, who met Strickland in 1999, when they attended the New School, says the saxophonist wanted the musicians to “bring the beats to life,” demonstrating how they can legitimately fit in a jazz context. “We grew up with hip-hop, gospel, jazz-we grew up with everything,” Harrold says. “So it’s never really a contrived event. … [I]t really is part of the vocabulary. It’s just like checking out Trane, Bird, Ornette or Duke Ellington. It’s the same as checking out Timbaland, Kanye, Dilla. Even though it’s a different quote-unquote ‘genre,’ it’s the same building blocks. So it’s not like [we’re saying], ‘We’re going to play hip-hop.’ No. Let’s play music.”

The beats in the opening “Tic Toc” set an aesthetic that continues throughout the album. They’re layered with a live, rubbery bassline (here by Kyle Miles) and spatial horn lines from Strickland (on alto as well as tenor) and Harrold. Ndegeocello and drummer/co-producer Charles Haynes helped Strickland achieve a particular feeling in the rhythm section. “I wanted a very muddy bass sound, just like when J Dilla rubbed the record, recorded that and tuned it to make his bass sound,” he says.

Two tracks add dynamic soul-jazz vocals by Baylor, whom Strickland says has “an incredible timbre. She can make words sound like the most beautiful dove that you ever saw.” Taking a cue from the short interludes that Dilla or White Lotus inserted between complete tracks, Strickland creates some of Nihil Novi’s strongest messages in a small space. His twin brother, E.J. Strickland, expounds in the self-explanatory “Cherish Family.” “Mantra,” featuring Strickland’s bass clarinet and samples as accompaniment, is a brief recording of Harrold speaking frankly about his hometown of Ferguson, Mo., where the 2014 shooting of an unarmed black teenager sparked national outrage. Both tracks last less than two minutes, Strickland explains, to maximize the impact.

The saxophonist believes that artists by nature should feel obligated to incorporate social commentary into their work. “If we have that involved in our art more so than [simply thinking], ‘I’m going to play the crap out of these changes,'” he says, pausing to laugh, “it becomes much more than just music. It becomes a message. And the message is encoded in something that is very enjoyable.”

If Ronnie Foster had never recorded anything but the spaced-out, frank and funky soul of 1972’s Two Headed Freap (recently re-released) and 1973’s Sweet Revival, … END_OF_DOCUMENT_TOKEN_TO_BE_REPLACED

When Enrico Rava recorded The Song Is You (ECM), his new album of duets with pianist Fred Hersch, in Lugano, Switzerland, he was just out … END_OF_DOCUMENT_TOKEN_TO_BE_REPLACED

The title of trombonist/composer Kalia Vandever’s second release, Regrowth (New Amsterdam), follows logically from the botanical metaphor of her 2019 debut, In Bloom. The new … END_OF_DOCUMENT_TOKEN_TO_BE_REPLACED

If we’re going out on a limb and calling the music that trombonist, vocalist, and songwriter Natalie Cressman makes—as soloist, as side-and-session person, in a duet … END_OF_DOCUMENT_TOKEN_TO_BE_REPLACED