Skip to content
Become a member and get exclusive access to articles, live sessions and more!
Start Your Free Trial
Home > Features > Marcus Roberts: “All Kinds of Things” 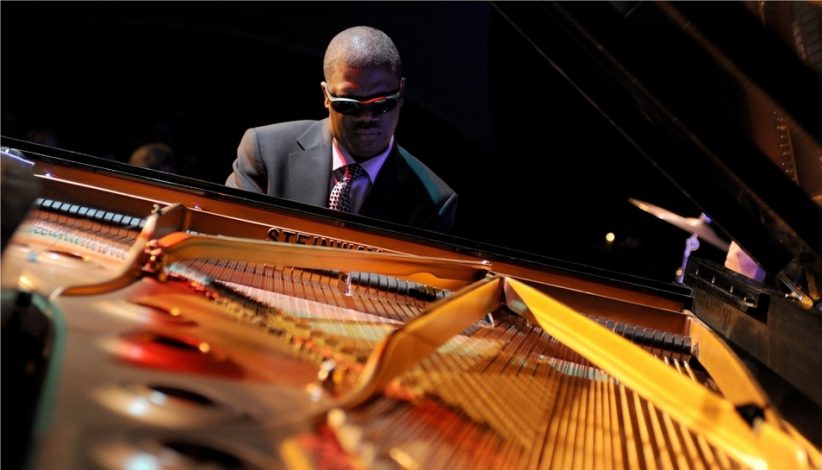 “We were talking, the [Jazz at Lincoln Center] Orchestra, about who we consider to be a genius,” laughs Wynton Marsalis. “I said someone was a genius and cats were laughing at it. So I said, ‘All right, then, who do you consider a genius?’ And the cats said, ‘Marcus Roberts.'”

If anyone is aware of Roberts’ brilliance, it’s Marsalis; after all, he first made his mark in the trumpeter’s band from 1985 to 1991. Ask Roberts, though, and he’s simply a hard-working artist, even if his profile on the jazz landscape isn’t what it once was, despite efforts like his 2012 disc with Béla Fleck, Across the Imaginary Divide, and the nonet recording Deep in the Shed: A Blues Suite, released that same year. “To some folks it may have appeared like I haven’t been doing a lot over these last years,” the pianist and composer, 50, says on the phone from his home in Tallahassee. A native Floridian, Roberts is a jazz studies professor at Florida State University. “Maybe the sense was that I was just walking my dog every day at 5 o’clock and wasn’t really doing much. But quite to the contrary, I’m always working-on all kinds of things.”

“All kinds of things” is right. Last April, on the 45th anniversary of Martin Luther King’s death, Roberts premiered a piano concerto dedicated to King with the Atlanta Symphony Orchestra. Then, in November, he released three albums: From Rags to Rhythm, a 12-part suite, and two reunion albums (both recorded in 2007) with Marsalis, Together Again in the Studio and Together Again Live in Concert.

These are ambitious projects, too. Each of the concerto’s three movements is based on an analogous one by a classical composer, but the piece also explores components of the blues (chords, rhythm, improvisation). Though the Marsalis records-both performed with Roberts’ longtime trio, Rodney Jordan on bass and Marsalis’ younger brother Jason on drums-are titled such that they suggest the same music presented in two contexts, in fact they’re entirely different set lists; the studio record includes five Roberts originals and three standards, while the live one is all standards. They also call for the musicians involved, especially the trumpeter, to employ all aspects of their respective techniques. From Rags to Rhythm, again performed with the trio, is not just a conceptual suite but a thematic one: It’s built on five short motifs that comprise the suite’s opening, shape many of its melodies and serve as sectional cues within the movements.

More ambitious still, Roberts edited and produced everything for release on his own J-Master label-no small feat, given that the pianist has been blind since childhood. He was able to do so by virtue of a software package called Job Access With Speech, or JAWS. The program works with the onscreen visual display that sighted people use, but interprets its information and relays it to the user with a digital speech interface. “Just learning that technology, that took a couple years of work. It’s finally matured to the point where you really can do serious editing on your own,” says Roberts. Just exploiting this functionality, he adds, is important. “I feel like I’m kind of a representative of the disabled community in general, and certainly the blind community-I have a responsibility to use this technology to show that a blind person can do it.”

It’s a rather ultramodern undertaking from a pianist whose reputation is that of a neo-traditionalist, noted for his blues and stride chops as well as for tributes to players like Jelly Roll Morton. But Roberts disputes that characterization. “I don’t know when that started or what that really means. Certainly I love early piano and consider it important, but I hadn’t even heard Jelly Roll Morton’s music until I was 26 or 27 years old!” he chuckles.

“What I am a proponent of,” Roberts adds, “is a dialogue with the history of jazz, and to showcase its relevance right now, today. If you have a chef who cooks you a meal that’s based on a 350-year-old recipe, if you’re hungry, and you eat the food, and it tastes great, are you going to say, ‘Well, no, I don’t want that because it’s too old?’ You’re probably gonna say, ‘Have you got more of it back there?'”

Indeed, for all the early jazz feel in much of Roberts’ music, it has always engaged with bebop and postbop as well. His piano-trio conception, for example, involves the instruments interacting on a democratic level, à la Bill Evans. That sensibility, and other modernisms, can be heard in his new releases as well: From Rags to Rhythm is very much in a postbop milieu, and even the live standards with Marsalis include “Giant Steps” alongside “When the Saints Go Marching In.”

Is Roberts a genius? That’s unknowable. But his combination of talent, ambition, discipline, stylistic openness and resourcefulness suggest that he is a remarkable musician-perhaps even a phenomenon, another sort of which Marsalis can’t resist comparing him to. “When the Lincoln Center Orchestra plays with him,” he says, “cats look like they seen a ghost, he’s playing so much stuff.”

Guitarist Will Bernard bears the bittersweet blessing of virtuosic skill and eclectic taste, making his music a perpetual delight and yet hard to categorize. Maybe … END_OF_DOCUMENT_TOKEN_TO_BE_REPLACED

At 95, Chicago-based guitarist George Freeman is among the world’s oldest active jazz musicians. Although he came of musical age in the 1940s and counts … END_OF_DOCUMENT_TOKEN_TO_BE_REPLACED

When you’re on TV, everybody knows you, or at least thinks they know you. Take Kevin Eubanks, who was on NBC’s Tonight Show five nights … END_OF_DOCUMENT_TOKEN_TO_BE_REPLACED