Skip to content
Become a member and get exclusive access to articles, live sessions and more!
Start Your Free Trial
Home > Features > Marc Ribot: The Ghost in the Guitar 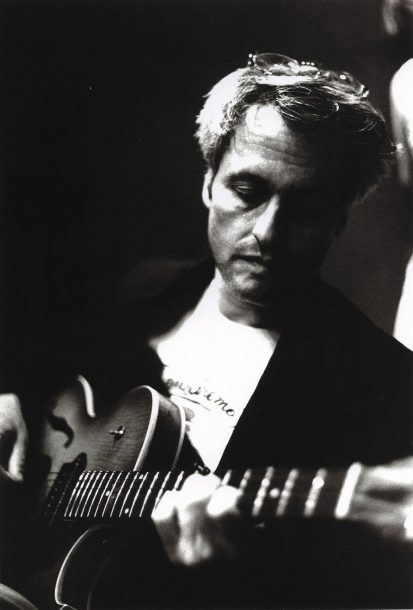 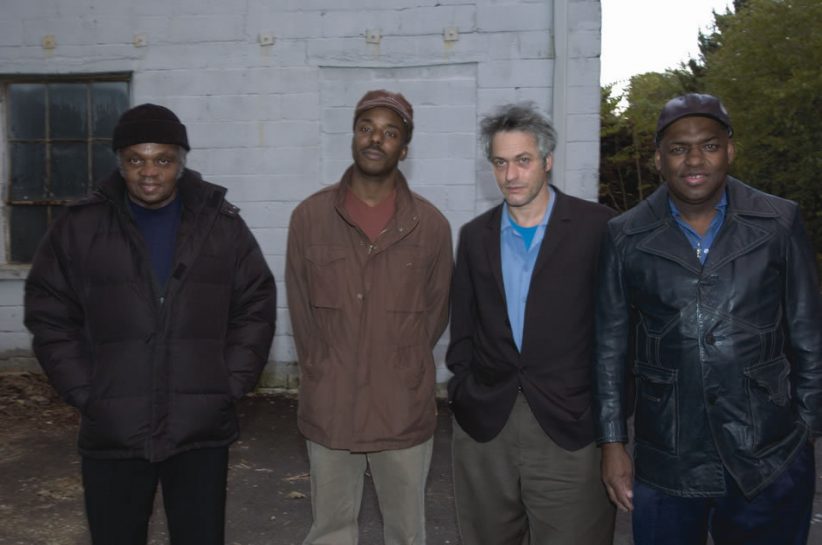 Marc Ribot keeps a hectic, fragmented schedule. He’s just returned to New York City after touring Europe with his latest band, Spiritual Unity, which honors the music of avant-garde icon Albert Ayler-though the day before he left he managed to fit in sessions with Peruvian singer Susana Baca. A few days later he’s playing with Kenny Wollesen, John Medeski, Chris Wood and others to celebrate Music Mobe, Ribot’s new database project that will link social activists and musicians-like Friendster for progressive people. After that? “I don’t know,” Ribot says. “I keep busy.”

That sort of seat-of-the-pants eclecticism is befitting of a guitarist who seems less concerned with maintaining an image than committing himself to whatever style or sound happens to catch his ear.

Ribot describes himself as a rocker, but his definition is catholic. He grew up in Newark, N.J., studying with classical guitarist, composer and family friend Franz Casseus, and he began his professional career backing soul singers across the river. Later on, he would divide his time among projects by fellow genre-busting musicians like John Lurie’s Lounge Lizards, John Zorn, Tom Waits and Elvis Costello.

“I don’t know if it’s productive to say I’m this kind of musician or that kind of musician,” says Ribot. “But I do come from a rock background, and I have a lot of the values of a rock player. One of them is this pull toward-well, maybe it’s a macho thing. I feel as though I should be able to kick ass with one harmonic hand tied behind my back.”

Spiritual Unity is Ribot’s latest forum for kicking harmonic ass. This quartet plays the music of saxophonist Ayler-without a saxophone in the band. It does, however, include trumpeter Roy Campbell, drummer Chad Taylor and bassist Henry Grimes. The group’s debut, Spiritual Unity (Pi), comes out at an auspicious time. Not only has last year’s sizeable Ayler box set Holy Ghost (Revenant) reenergized interest in the free-jazz giant, but his one-time bassist Grimes only returned to playing in 2003 after three decades away from music and musicians. Missing from the jazz scene and even thought to be dead, Grimes was discovered in L.A. by a social worker and jazz fan in 2002. It didn’t take long for Grimes to rejoin the scene, and today he’s an in-demand musician.

With Campbell, a versatile free-bop trumpeter, and Taylor, the Chicago Underground drummer with ties to jazz, experimental rock and modern composition, Ribot has put together a striking lineup, but the guitarist is candid about the real impetus behind this project. “The band was conceived as a very thin excuse to do some playing with Henry,” he says. “So yes, I’d say it was very important to have him in the band.”

In fact, Ribot was so excited to play with Grimes, that he not only formed Spiritual Unity to play with him, he invited Grimes into his Django Reinhardt project. “We had done an early gig of [Spiritual Unity],” Ribot says, “and we were packing up to go. I said, ‘I’ve got this gig doing Django Reinhardt stuff,’ and Henry said, ‘I like Django.’ I said, ‘All right then.’ You can describe [the Django project’s sound] a lot of ways-but what it didn’t sound like was the Hot Club of France. Why? I don’t know. I guess I thought it’d be fun.”

Grimes may be best known as a popular bassist on the ’60s free-jazz scene, but he also played straightahead jazz behind consummate swingers like pianist Billy Taylor and guitarist Kenny Burrell. “Henry does have a connection to those other forms of swing,” Ribot says. “He was known as a very good walking bass player back in the day. It’s really interesting to hear Henry play in those styles. Hearing him play swing is like punching a hole in the wall and looking into a room where it’s still the 1950s. He has a conception of playing that is much closer to how it was and different than how it’s remembered.”

Ribot’s interest in Ayler’s music didn’t begin with Grimes’ dramatic reappearance. The guitarist has been performing the saxophonist’s music since he led Shrek in the ’90s, and has returned to Ayler compositions many times over the course of his career.

Back in Shrek, Ribot started writing compositions for the group that shared some qualities with Ayler’s music. One day, keyboardist Anthony Coleman connected the dots for him. “I was writing a certain kind of piece that was based on guitar harmonics,” Ribot says, “and it sounded like bugle calls, which are also based on harmonics when you come down to it. Natural harmonics. Anthony pointed out to me that it had certain things in common with some of the Ayler material. That got me started listening more deeply.”

Then and now, Ribot found himself drawn to the formal and improvisational possibilities of Ayler’s music. “There’s a lot going on in Ayler’s compositions,” Ribot says. “A lot of signature Ayler compositions have major or minor sections with very harmonically simple melodies. It’s almost like marching-band music or a hymn. When you put this music in front of people who are trained to play bebop and more complex forms, and you impose a limitation on them, a kind of short-circuiting takes place. This gets players out of their normal function, their normal method of playing solos, and enables them to play something radically different. Musicians who train for years and years to be able to play certain scales over certain harmonic structures suddenly find themselves on a flat landscape. It’s like an animal that lives and hides in hills and valleys suddenly finding itself on the plain and freaking out. [The music] gives the soloist no place to hide. I speak here from personal experience. I was that animal.

“I’m attracted to this idea,” Ribot continues. “It’s all about development in music. If you want to play something of a decent length and you repeat a motif over and over again it gets boring. So unless you want people to get bored and leave, you have to develop it. The solution that bebop-era jazz chose was to develop into harmonic complexity. That’s one solution. It’s a great solution. But it’s been done-in jazz, in Brazilian music, in certain kinds of classical music. Ayler’s solution to this was different. Ayler did not use complex harmonies. He used very simple harmonies. But he developed the music through more complex forms. Bebop, as a form, is AABA, blow, and BA out. Or some type of AABA out. It uses this form again and again and again. That’s not interesting for me. I’m interested in other ways of doing that, and one of these other ways that I’ve found in Ayler and in some Latin American forms is developing something like Ayler did with [his composition] ‘Bells,’ which has the two beginning sections, then it has a B section, then improvising, then a C section and then more improvising. It even has a D section. It’s much more formally complex-with melodies, countermelodies. I like it. It’s something I’ve found useful.”

Ribot’s interest in Ayler isn’t strictly academic, however. The raw, communal aspects of Ayler’s free jazz also overlap with elements of punk rock, which Ribot claims as his aesthetic home turf. “When I play [Ayler’s music], it highlights some kind of common energy or common meanings in the music with a certain kind of punk rock,” he says. “What I’m interested in is that it seems to be a process music, kind of a ritual. [Ayler’s] concerts were not the presentation of polished aesthetic gems. Originally, they served a kind of ritual function. People were experiencing and watching the musicians experience-well, without defining what it is that they were watching-they were watching something happen. It wasn’t just the musicians making these sounds but rather getting to a place where making these sounds made sense.”

All of this plays a part in Spiritual Unity. On classic Ayler numbers like “Saints,” “Bells” and “Truth Is Marching In,” the band preserves a remarkable balance throughout. Aside from the few times when the band respectably stands aside for elder statesman Grimes’ overtone rich arco, no instrument dominates for any length of time.

Treating Ayler’s music as an open process rather than an exercise in repertory, the band brings all kinds of rogue elements into the group sound. Campbell laces his lines with bebop licks and quotes other tunes. Ribot’s sometimes distorted guitar bears the unmistakable stamp of rock. He plays warbled approximations of Ayler’s saxophone wail but also feels free to chord. Resisting the impulse to push the band with muscle and volume, Taylor prods with his lyrical, linear touch on the cymbals and stays well within the group dynamic. Ayler’s instantly recognizable themes frame the music, but the group maintains its own sound, which can be surprisingly delicate.

“The way I was approaching it was just trying to get the energy and the intentions of the music,” Taylor says. “One of the things I get from the music is that it’s very spiritual. I don’t hear that much music nowadays, as opposed to the ’60s where a lot of the music was coming from that point of reference.”

Campbell studied with Albert’s trumpet-playing brother Donald Ayler in the early ’80s and considers him a model for his own playing. Plus, the opportunity to play this music alongside Grimes was too good to pass up. “Great music is always contemporary,” Campbell says. “I don’t care what time it came from or what year it is. It has a freshness, something that will draw you to it and give you a good feeling even if you heard the recording hundreds of times. You always get a good feeling when you hear it. Albert’s music to me was the beginning of jazz and the freshest thing in jazz at the same time.”

Before joining Spiritual Unity, Grimes hadn’t played a note of Ayler since he took his long break from the music business. When the bassist finally did, it was in the company of younger players with influences that were strange to him. But what began as an odd situation for Grimes did not stay that way-at least not where Ayler’s music is involved.

“Albert Ayler seems to be the ghost who puts everybody to the tack,” Grimes says of Spiritual Unity. “Albert’s personality was very strong. He and his brother, they played so strong that anyone who played with them just goes along with it. And that’s all. It’s like taking a ride on some kind of wild bull. It drives right off the stratosphere. You feel it in his music, and then there’s nothing you can play but his music. This is what I remembered back in the ’60s, jamming in lofts. That’s the way it was.”

For Spiritual Unity, Ribot used a “Gibson ES-225 played through a Fender Vibrolux Reverb amp. Maybe I used a volume pedal, a Tech 21 Double Drive and some Danelectro cheapo [effects]. I usually use a lot more effects than I do on this record. This was about playing and limits-limiting the sound.”

OK, that’s funny, but it also implies a problem. People who dismiss the accordion as soon as they hear it, as soon as it triggers … END_OF_DOCUMENT_TOKEN_TO_BE_REPLACED