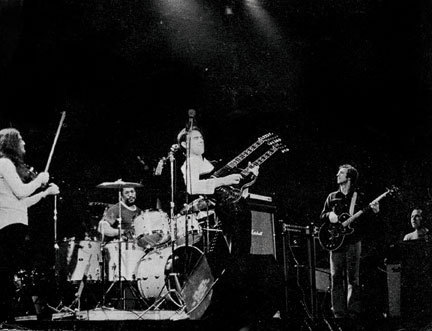 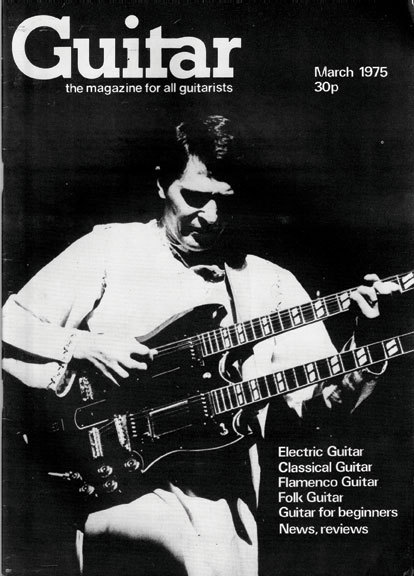 John McLaughlin on the cover of Guitar Magazine, 1970s

Between 1971 and 1973, John McLaughlin’s original Mahavishnu Orchestra created some of the most technically dazzling and emotionally affecting music of the 20th century. In this excerpt from the new biography Bathed in Lightning: John McLaughlin, the ’60s and the Emerald Beyond (Jawbone Press), Colin Harper details the whirlwind ascent-and drama-filled implosion-of what was, albeit briefly, the world’s greatest band.

The first Mahavishnu Orchestra was born and died in New York City. Two and a half years separated those events. In between, they released three records, played somewhere in the region of 500 concerts and managed to astound the world, or that part thereof which took notice of modern music. And, in the early ’70s, that was a lot of the world. There were still vast, uncharted realms of sound for music to inhabit, still record-making corporations willing to fund the voyages of exploration and still hordes of listeners eager to make new discoveries. Popular music informed the culture, it was muscular and virile, and the feeling was abroad that perhaps still it could change the world. Mahavishnu John McLaughlin had not a shred of doubt about that.

Changing the consciousness of the world was, for John, the whole point of the thing. For the other guys, whatever turned John on was fine: They were simply ecstatic to be playing in what felt like the greatest band on the planet. The band, like the city, was a melting pot of nationalities and cultures: John McLaughlin from England; Billy Cobham from Panama; Rick Laird from Ireland via New Zealand, Australia and London; Jan Hammer from Czechoslovakia, as it was then, via Germany; and Jerry Goodman from Chicago. Many roads had led each of the five to New York where the first Mahavishnu Orchestra came together in the summer of 1971.

John’s first recruit, Billy Cobham, was almost a native. His family had moved to Brooklyn when he was 8.

When we started I still didn’t really understand what John McLaughlin was trying to do, and also the music was taxing on me because I didn’t know how to approach it. So I used to put all my energies into it and I’d come away huffing and puffing and really, it would frighten me. … Then, all of a sudden, I began to learn how to pace myself. It was either that or die.

As much as John’s lightning-fast playing, esoteric modes and mind-boggling time-signatures imbued in listeners and concert-goers a sense of awe, so too did the physique, stamina and creative prowess of Billy Cobham. He was a guy you’d want to have on your side, not coming after you-which was exactly how the rest of the band felt any time there were disagreements with dubious concert promoters. While the unit was, to its members, five equally dependent people (musically if not contractually), to many at the time Billy Cobham was up there with John McLaughlin as the superstar within.

“I never know what’s going to happen,” Billy said, “when, how or who it’s going to happen to-but you know it’s going to happen!” While Cobham was largely self-taught, Jan Hammer had been brought up in a jazz-mad family in Prague, had been through conservatory education, had won awards and had most recently earned a living playing at strip clubs in Boston. “I had wanted to leave for a long time, but I waited to make sure I wasn’t going to come back,” he explained, at the height of the band’s success. “Some people said I’d waited too long to come to New York. But I didn’t feel New York.”

Finally, in April 1970, he made the move, securing a gig in NYC as pianist-arranger to singer Sarah Vaughan. Hammer made a dramatic, whole-hearted journey from starched European jazzman to American rock ‘n’ roll animal as a member of the Mahavishnu Orchestra. He had an ally in violinist Jerry Goodman-the pair united as much in age (being, at 24 and 23 respectively when the band started, between five and seven years younger than the others) as in outlook. “John first approached me with the idea of the band even before there were any other members,” said Jerry, in 1973. “I went to New York and did … My Goal’s Beyond. The irony in the album title was that I sort of did it against my will. At that time, I was living on a farm in Wisconsin really enjoying myself … [but when] John and I got into a room and started playing together, zap! Energy was there-all around! All of a sudden I could see it, hear it, feel it and there were no doubts about anything after that.”

Rick Laird had known John since 1963, from their shared time together on the British jazz scene. While John worked in many contexts during the ’60s, Rick was strictly a jazzman, and happy to be a sideman before moving to Boston to study at Berklee College of Music. “Don’t stay at Berklee too long, come to New York and play!” saxophone icon Sonny Rollins told him. Rick didn’t listen-or, at least, not hard enough.

Two and a half years after starting Berklee, in 1969, Rick had headed to Los Angeles with big dreams; within a week he was trapped, and would remain so for two years, as the bass player with notoriously egocentric drummer and bandleader Buddy Rich (“the music was insignificant: just a filler between drum solos”). “I got off the band in 1971 in London, disillusioned about the States and music. I’d been playing for a long time and was tired. … I was beginning to think about other things like carpentry … something creative. Anything except wearing a tuxedo and playing at bullshit gigs. Then John called.”

When you’re on TV, everybody knows you, or at least thinks they know you. Take Kevin Eubanks, who was on NBC’s Tonight Show five nights … END_OF_DOCUMENT_TOKEN_TO_BE_REPLACED

Jimmy Katz leads many lives. He is the preeminent currently active jazz photographer, and has shot more than 200 magazine covers and over 600 recording … END_OF_DOCUMENT_TOKEN_TO_BE_REPLACED

Take a look at Blue Note Records’ release schedule for 2022 and it’s hard to miss the significant percentage of electronic-oriented music. In March, the … END_OF_DOCUMENT_TOKEN_TO_BE_REPLACED