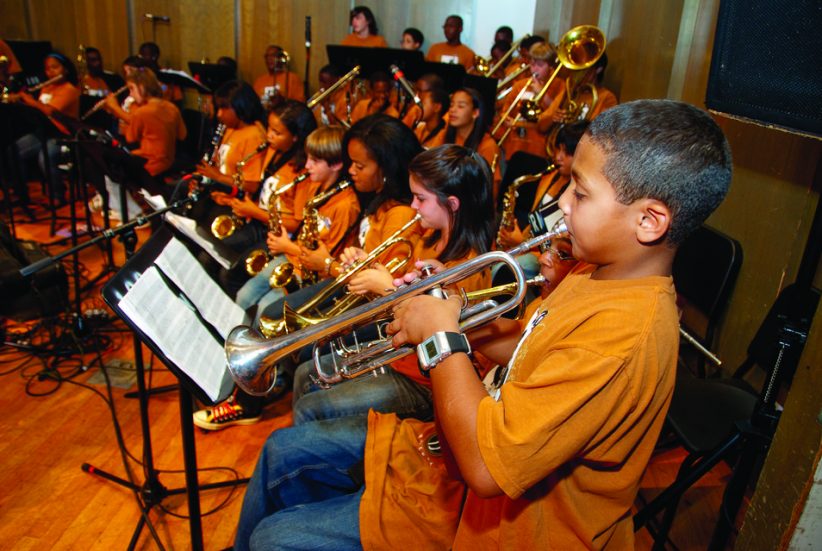 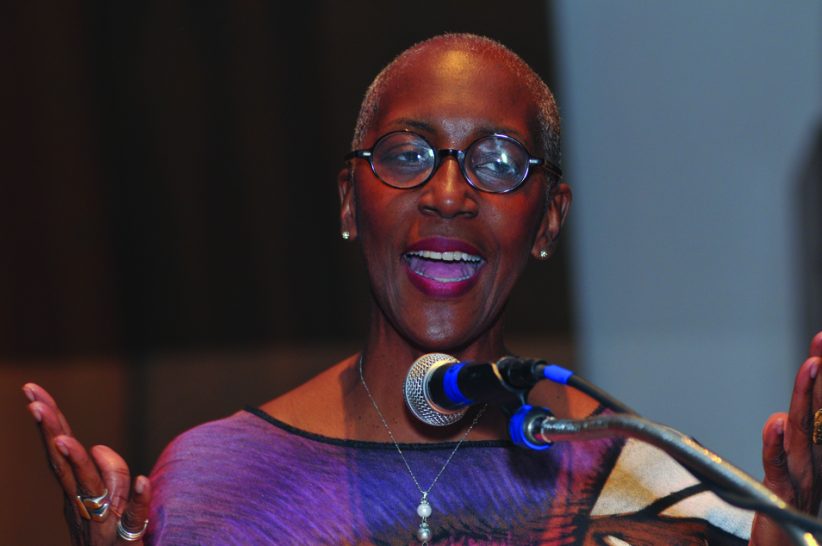 On a steamy July morning in New Orleans, the fourth floor of Loyola University’s music building is electric. At one end in a corner room, flutist Kent Jordan encourages a flute aspirant; in an adjacent space, youthful clarinetist Gregory Agid puts more campers through their paces. Around the next corner, piano instructors Peter Cho and Darrell Lavigne drill keyboard students learning Monk’s “Misterioso.”

“That time I heard ideas-I didn’t hear fishing and wandering,” Cho encourages. Peeking in a larger rehearsal room, artistic director Edward “Kidd” Jordan (pictured on the home page) urges some beginning students, admonishing one young trumpeter on being “consistent” in counting off rhythms. Meanwhile, in the main rehearsal area, a student ensemble runs through the changes to “Straight, No Chaser.”

It’s the annual Louis “Satchmo” Armstrong Summer Jazz Camp, a three-week program that runs each day from 9 a.m. to 3 p.m. Founded in 1995 by Jackie Harris, currently executive director of the New Orleans Arts and Cultural Host Committee, with assistance from then-Mayor Marc Morial, the event was held at the University of New Orleans Medard Nelson Charter School for its first 15 years. This year marked the camp’s third year on Loyola’s campus, the former digs of the Thelonious Monk Institute of Jazz. In founding the event, camp director Harris, who speaks in measured Southern tones and with quick wit, anticipated the mushrooming crisis in Orleans Parish arts education-a problem well before Hurricane Katrina. “At the time, arts education programs were being taken out of public education,” Harris recalls. “There were budget cuts all over the state. We felt that young people in New Orleans needed avenues and opportunities to study jazz music in its birthplace, and if we didn’t do something about providing those opportunities the cultural heritage of the city could be lost.”

Students range in age from 10 to 21, and among the 75 young people at the 2011 camp a good portion were returnees. Returning New Orleans students pay $100 per week, new local students pay $110 per week, and prices increase for out-of-parish and out-of-state students. Housing is also available for out-of-state registrants. Of the students, Harris says that 80 percent are New Orleanians, 10 percent come from out-of-parish, and 10 percent from out-of-state, as far away as Virginia and California. Students recruited locally, via such avenues as the city’s vibrant roots music station WWOZ, must audition, be at least 10 years old and have been studying music a minimum of two years. “They must have a relationship with their instrument and some relationship with their scales,” Harris says, outside a rehearsal room where a student big-band strikes up “Everyday I Have the Blues.”

Campers’ progress, Harris emphasizes, is “based on what they’re able to do with their instrument, what they are able to hear and interpret, what their music performance is like-individually and as a unit in the large or small ensemble. And young people learn social skills in this camp.” Given the crisis in public education in New Orleans, clearly this camp is a welcome oasis.

Satchmo faculty reflects the versatility of New Orleans musicianship, from veterans of the marching band traditions to those who straddle the jazz/R&B fences, to hard boppers, to those conversant in all of the above. Several faculty members are full-time university music professors and high school music directors; others, like Pulitzer Prize-nominated Roger Dickerson Sr., who teaches composition at camp, are retired university educators.

Befitting the New Orleans music community, the faculty also bears a latticework of family ties. Jordan’s accomplished sons, flutist Kent and trumpeter Marlon, teach their instruments, and their cousins Maynard Chatters and Jonathan Bloom Sr. teach trombone and percussion, respectively. Several students are family members as well, including Chatters’ granddaughter and Bloom’s son. (And then there are notable family connections extending outside of camp. Bass instructor Brian Quezerque, for instance, is the son of noted Crescent City composer-arranger Wardell Quezerque, known as the “Creole Beethoven.” Herman Jackson, drummer in actor Wendell Pierce’s band on the HBO series Treme, is the brother of American Idol judge and bassist Randy Jackson.)

On the vocal side there’s instructor Germaine Bazzle, a Crescent City legend who’s been teaching at Satchmo camp for over a decade. In the vocal rehearsal room she patiently encouraged several young ladies singing “Blue Skies” and its chord-change sibling “In Walked Bud.” “I believe [students] should be challenged,” she says. “We have a tendency to put limitations on children, to say, ‘They can’t do this; they can’t do that.’ But when I selected this song I wanted them to understand that many times the changes in one tune can serve as the basis for another creative thing. It’s a form of improvisation really, on chord changes. When you take a standard like ‘Blue Skies’ and do what Jon Hendricks and Monk did on that, it’s a challenge.”

In the end, what makes the Armstrong camp’s take on jazz education so unique is Kidd Jordan. With his shock of white hair, bushy eyebrows and Popeye-esque forearms, the 76-year-old is distinctive in appearance alone. Add his suffer-no-foolishness attitude and the fierce adherence to freedom principles he demonstrates in his music, and Jordan becomes a welcome rarity among music camp instructors. (Try and name another jazz camp that embraces a dedicated free-jazz saxophonist and Vision Festival honoree, even appointing him artistic director.)

Retired from directing the jazz program at Southern University’s New Orleans campus, Jordan is nothing if not good-humored about his playing proclivities. During a confab in prep for the annual faculty concert on the last Wednesday of camp, Jordan broke it up by volunteering to play his featured set at whatever time “ya’ll want to clear the house.” But fact is New Orleans’ audiences have long given Jordan plenty of rope on his forays: One need only experience his annual Jazz Fest freedom quests to recognize that.

Speaking to the New Orleans tradition of naturally skilled but callow street kids blowing horns in marching bands and second lines, Jordan points to one camper and says, “When I put the horn in his mouth I knew he had the facility-that’s not the problem. But I’m trying to get him to a point where if his family can’t get him a trumpet we’re gonna let him keep that one. But all he’s thinking about right now is going out to the streets.

“He’s been marching in parades,” Jordan continues, “he’s got the talent, and I just hope I can keep him blowing. These kids are beginners, barely knew their notes and things, but I’ve been on them from day one. It’s coming.”

Judging from several student comments, the challenges of this camp are appreciated. Ty Forman, a third-year student staying with relatives in Baton Rouge, says, “I live in Virginia and there’s not a whole lot of this kind of culture and music played there, so I’m able to broaden my musical knowledge, just get better with what I love doing.” Bass student Paul Joseph, a member of the Chatters-Jordan-Bloom clan, is equally enthusiastic. “I came down here two years ago for Christmas and I got to see my uncle Maynard [Chatters] play at Preservation Hall. I had never listened to a music that made me feel that good. It was just real optimistic, and I want that kind of effect on people by playing music as well. When I started out all I could do was read music; I could read it well but I couldn’t improvise and I couldn’t think for myself. But coming here to the camp … I’m able to improvise with a lot of confidence now.”

North American jazz fans are just starting to learn the name Daniela Soledade, but in Brazil, where she was born and raised through her early … END_OF_DOCUMENT_TOKEN_TO_BE_REPLACED

I can personally testify that Antonio Sánchez, who adopted the sobriquet “Bad Hombre” several years ago for a solo drums-and-electronics album, is a truly nice … END_OF_DOCUMENT_TOKEN_TO_BE_REPLACED

On November 22, 2021, some of the late Paul Motian’s close friends converged on the Village Recording studio in Copenhagen. Guitarist Jakob Bro and tenor … END_OF_DOCUMENT_TOKEN_TO_BE_REPLACED

Before we enter the current world of drummer, producer, and curator Denardo Coleman, a funny story from the past.  In 1996, the year after the … END_OF_DOCUMENT_TOKEN_TO_BE_REPLACED