Skip to content
Become a member and get exclusive access to articles, live sessions and more!
Start Your Free Trial
Home > Features > Listening With Greg Osby 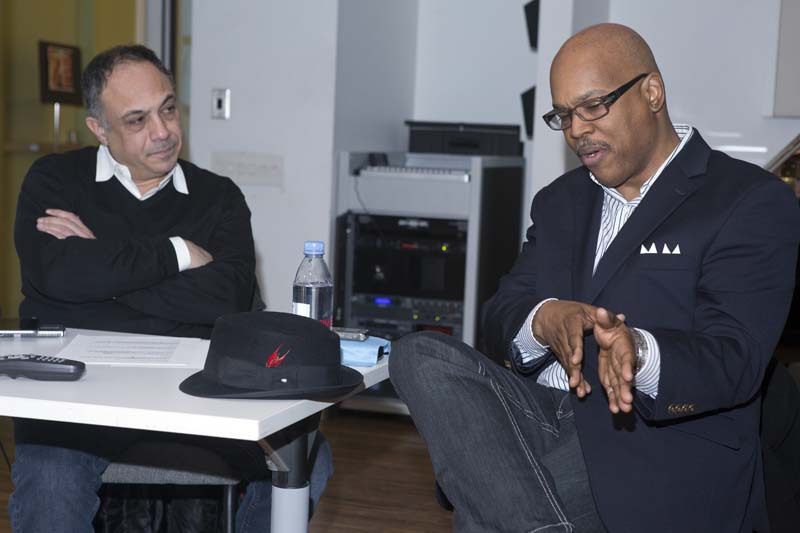 Since the late 1980s, when alto saxophonist Greg Osby stepped out of bands led by the likes of Dizzy Gillespie, Jack DeJohnette, Jaki Byard and Andrew Hill, he’s been his own man: fronting groups, developing projects and serving a primary role in the influential Brooklyn-based M-Base Collective, along with Steve Coleman, Cassandra Wilson and others. His distinctive attack and compositional approach distinguish his more than 20 albums released under his own name, the majority of them on Blue Note with the unrelenting support of the late Bruce Lundvall.

Osby now records for his own label, Inner Circle Music, where he’s also fostered leading young talent including saxophonist Melissa Aldana and vocalist Sara Serpa. And while his sense of commitment hasn’t diminished in the least, Osby, now 55, seems to be willing to take a breath career-wise, allowing elements of chance and whim to help guide the way. Most recently he’s been performing in projects as a featured soloist more than bandleader: next to Joe Lovano and Dave Liebman in Saxophone Summit, and in a quintet dedicated to the music of Lennie Tristano. He’s also the newly appointed curator of the Sopot Jazz Festival in Poland. This Before & After session took place at New York University’s jazz facility in early March.

BEFORE: Very well executed, well produced. Sonically it was a great recording. They sound fairly young-at least 10 years younger than me. The level of players these days is leaps and bounds above my generation. They have more intellectual access; they can learn and absorb faster and retain the information better as well.

The alto player seems to be influenced by Kenny Garrett to some degree-Kenny’s been lionized by alto players all over the world, everywhere I go. I really can’t say who it is. It sounds like an institutionalized player, not somebody who apprenticed under somebody. Perhaps it’s someone who earned their bones in school. They sound really accomplished. It could be Antonio Hart or Miguel Zenón.

AFTER: I know Jaleel very well, and that didn’t sound like the Jaleel I know. That sounded like it was EQ’d to make it very smooth and more compressed, because Jaleel is a fiery player. His sound is a little bit more strident and raw. It has more bite than that. That’s why I didn’t recognize him, but I enjoyed it. It was very good contemporary jazz.

BEFORE: This takes me back. I played this kind of music in high school-jazz-based pop tunes without vocals. This sounds like early to mid-’70s, one of those Creed Taylor[-produced] recordings. That had to be Hank Crawford because of the way he attacks those notes, a stabbing of the notes. His sound has a lot of core, a lot of midrange. It’s not what you call a fat sound, but it’s very distinctive, very detailed and sounds like a person singing. He made really good use out of the pentatonic and the blues scales without a lot of harmonic alterations.

I used to listen to Hank a lot when I first got into playing the saxophone because he preceded Grover Washington Jr. Later David Sanborn emerged, as did Ronnie Laws. They were the first four pre-smooth-jazz but super-funky, bluesy players that I mimicked before I learned the higher properties-chord changes and progressions and things like that. I’m hoping that was Hank Crawford playing “Good Morning Heartache.”

AFTER: Yeah, that whole crew-Joe Beck, Bob James, Idris Muhammad, Cranshaw. Man, that was in the air in St. Louis. Practically every bar, joint and pool hall had a Hammond B3, and all the jukeboxes had these toe-tappers, as they called them: “The Sidewinder,” “Watermelon Man,” “Song for My Father.” Grits-and-gravy, chicken grease. Lou Donaldson, Groove Holmes, you name it. This was the west side of town.

But I hated it as a kid because everywhere you go you’d hear this funky chitlin’ stuff-scratchy guitar, some guy playing out of tune on a tenor saxophone that was held together with rubber bands and paper clips and gum and Band-Aids. So I didn’t like it. At first. But when I got serious about my instrument of course I gravitated to that and I became the go-to guy, the young bluesy cat. I was 15, 16 years old in these bands with guys in their 30s and 40s, playing the kind of music where we would vamp a tune, just one chord, “Mister Magic” or something like that. We’d play it for 35 to 40 minutes for dancing, in these big halls where there’d be motorcycle gangs, the Elks, Masons and other people.

BEFORE: It does sound like a modern group. They’ve created an environment that’s not directly reflective of the swinging jazz tradition, but it’s another branch on that tree that’s kind of spidered out a bit. This sounds like Rudresh Mahanthappa. He has a very, very personal approach [and] a very, very personal group concept and logic. He’s very clear about his objectives within the parameters of that music; he stands behind it; he could explain the components that he uses to construct his environment.

Absorption. Energy. Pinched nerves. Grandmothers. These might seem like off-kilter topics for an interview with athletic Israeli pianist/composer Shai Maestro and his equally intense longtime … END_OF_DOCUMENT_TOKEN_TO_BE_REPLACED

As one of Dr. Barry Harris’ weekly New York City jazz workshops was getting under way on a Tuesday night in December, a friendly stranger gave me some advice: “Leave your ego behind.”

For years I had heard about these public sessions where anyone with $15, regardless of ability or previous experience, could spend six hours with the bebop piano legend. After seeing Harris play two exhilarating sets at London’s Pizza Express Jazz Club last August before an adoring crowd, many of whom had attended his master class earlier that day, I realized that I, a New Yorker and jazz pianist, needed to visit the workshop and report on the experience.

It’s not quite the Lost Ark of the Covenant, but for some time researchers had been aware of the possibility of a long-lost recording featuring Thelonious Monk and John Coltrane. In the December 26, 1957, issue of Down Beat there was notice that stated, “Willis Conover and the Voice of America were scheduled to invade Carnegie Hall late in November” to broadcast a jazz concert. Voice of America, the U.S. government shortwave-radio service that broadcasts news and music overseas, would sometimes feature concert recordings that were not aired in the U.S.

In 1996, while doing research for my book John Coltrane: His Life and Music, I found an advertisement in the New York Amsterdam News (a venerable black newspaper) that listed that VOA concert. With the date now in hand-Friday, November 29, 1957-I contacted the Library of Congress, which owns all the VOA tapes. Unfortunately, the LOC had no record of a VOA recording made at Carnegie Hall on 11/29/57, but staffers allowed that as they continued to organize and catalog this huge collection, it might indeed turn up-if it was there at all.