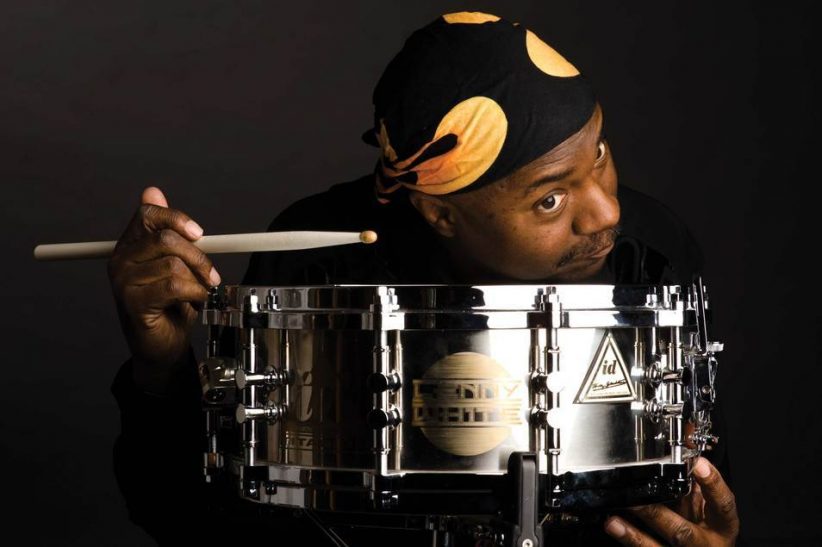 It’s a warm August night in Los Angeles. In the heart of Hollywood, the tables at Catalina Bar & Grill are filling rapidly in anticipation of a rare local appearance by Lenny White. The drummer is leading his new Anomaly band, which is touring in support of White’s new album of the same name-his first solo release of original material in more than 10 years.

Catalina’s is the logical place for White to stop in L.A. A few blocks south of the tourists crowding through the garish sights of Hollywood Boulevard, barely a mile and a half away from the Hollywood Bowl, the club has been one of Southern California’s primary destinations for national jazz acts for more than 20 years. Many in the Saturday night audience are present no doubt because of White’s association with such fusion institutions as Chick Corea’s Return to Forever and Miles Davis’ Bitches Brew.

One wonders, however, how many are aware of White’s desire to, as he says, “put the rock back into jazz-rock.”

In a backstage dressing room, grabbing a quick dinner of Catalina’s prime salmon before the show, he responds with one of his characteristically broad grins. “I just hope,” he chuckles, “that it’s not too loud for them.” It’s an understandable concern, given that high-decibel, rock-style amplification is not exactly what date-night clubgoers ordinarily expect to encounter in a room such as Catalina’s.

But when White and Anomaly-guitarists Jimmy Herring and Tom Guarna, keyboardist Vince Evans and bassist Richie Goods-begin their set, volume lunges at the audience, head-on, from the downbeat of “Drum Boogie,” one of the dynamic numbers from the new album. The first jolt drives some listeners to respond physically, casting startled looks at the stage and each other; some put their fingers over the ears, releasing them gradually and cautiously; one or two ask for their checks. The majority of the crowd, however-baby boomers, mostly-smiles happily, seemingly eager to bathe in the percussive waves of sound. By the time the set is finished, Anomaly is rewarded with a standing ovation.

Putting It Together, Again

Between sets, White is gratified by the response, and not surprised. “I like to think,” he says, “that the word ‘jazz’ has expanded to the point where it includes a lot of different kinds of music. And my attitude with this particular music, with Anomaly, is a jazz attitude. It’s not just rock. I’m a jazz drummer who is rocking out.”

Stanley Clarke, who has been playing with White in and out of Return to Forever for 40 years, completely understands that sentiment. “The whole jazz-rock thing that we did back then,” says Clarke, “was a really honest attempt for us, as young guys, to hook up with exactly what we were listening to. As much as we loved all the old stuff and the traditional jazz music, it was very difficult for us to dismiss the music that we danced to at parties, that our friends would listen to. We used to laugh sometimes at guys who, when they’d hear us putting jazz and rock together, would say, ‘Oh, they’re selling out; they’re being dishonest; they’re not pure.’ That was my favorite one: ‘They’re not pure.’ In actual fact, we were being very honest to all the music we loved.”

“Look,” White adds, “I haven’t made an album in 10 years. And my goal was to come back out and make a statement. And I would have loved to-and I still would love to-reach a lot of people, and not just audiences, because I’d like to break down some barriers for musicians. I mean, look at what happened to the saxophones. Wayne Shorter and Michael Brecker, they played saxophone in that jazz-rock vernacular. But-and no disrespect intended-when Grover Washington came out with ‘Mister Magic,’ it became something else. It was soul-oriented. And then ‘fusion.’ But what we were playing-what guys like Wayne and Michael were playing-was as hard as rock ‘n’ roll.”

Drummer Bobby Colomby, one of the founding members of Blood, Sweat & Tears, agrees. “What was happening with guys like Michael and Wayne and others,” he says, “was that they were playing with the intensity of rock, but-like Coltrane-they were doing so in a more mature and evolved way, moving beyond just three licks while at the same time defining the tempo in a way that’s basic to rock.”

Which is precisely what White is aiming to achieve with Anomaly: “What I’d like people to say when they hear Anomaly is, ‘Wow, we can take back this music and stop the fluff. We can play like that again.'”

“Playing like that again” is a theme that has marked the burst of activity White’s been experiencing over the past few years, most famously as part of the Return to Forever reunion tour featuring Corea, Clarke and Al Di Meola. White’s latest career renaissance, which is building to a peak as he approaches his 61st birthday in December, includes other high-profile projects, each an extension of the long-term relationships that were established in the ’70s with RTF. “We had a conversation just today,” says White, “Chick, Stanley and myself. We have a CD coming out of our trio, an acoustic recording. And it’s great.”

If that disc, entitled Forever and available now in Japan, is anything comparable to the music played on the Corea, Clarke & White world tour of 2009 and 2010, then White’s description comes closer to understatement than it does hyperbole. Bassist Clarke explains how the new recording underscores White’s immense versatility. “There’s this one tune on the album called ‘Hackensack,'” he says. “We play it really fast, swinging, like you could imagine Max Roach would do-like the bebop police could listen to it and go, ‘Man!’ And to hear Lenny go from there to playing the way he does on his Anomaly album, that’s one of the reasons why I’d have to say that Lenny is my all-time favorite drummer to play with. And I’ve played with all of them, everybody.”

Clarke also credits White with taking prime responsibility for assembling the album, which will reportedly see a U.S. release soon. “We left it up to Lenny,” he says. “Because out of the three of us, he’s probably the most astute guy in the studio. He’s a thinker, a visionary type of musician. And so we left it up to him to pull the stuff off, compile the music for the record, mix it and get it out. And he did it perfectly.” Another electric RTF tour is also in the works, and will feature a lineup of Corea, Clarke, White, original guitarist Bill Connors and violinist Jean-Luc Ponty.

Understandably, however, Anomaly-both the group and the recording-is currently the center of White’s attention. With it, he is determined to get back to the sort of basics he experienced as a teenaged drummer in the ’60s, growing up in the musical cauldron of his hometown of New York City. Early on, he heard the Lester Young, Count Basie and Ray Charles recordings his father favored. But with the arrival of the Beatles and the emergence of FM radio, his preferences became more omnivorous. “Radio was the way you heard music in the ’60s,” he says. “If you were fortunate enough to go to a concert or whatever, that was great. But the radio was your primary source. And radio at that time was very eclectic, meaning it wasn’t myopic musically the way it is now. You could hear Miles Davis and Led Zeppelin and Bob Dylan, depending on how hip the radio station you listened to was.

“I had the opportunity to listen to a lot of different kinds of music: Jimi Hendrix, Led Zeppelin, Cream and all these bands were making music at the same time. Miles was making music at the same time as Sly and James Brown and Cream. The Beatles were just winding down. The music was crossing. And in the area that I grew up in, if you played a wedding reception you had to play all different kinds of music. It had to be authentic, and you had to play the hits that were popular at that time.”

White fervently believes that those hits were made by great musicians. But today’s commercial rock and pop? Not so much. “I’m not saying that there aren’t great musicians on the scene now,” he adds. “But there are machines doing a lot of it. And so, on Anomaly, I just wanted to make a statement about musicians playing some music that was real and wasn’t afraid to take chances.”

The rest of this article appears in the November 2010 issue of JazzTimes.

When you’re on TV, everybody knows you, or at least thinks they know you. Take Kevin Eubanks, who was on NBC’s Tonight Show five nights … END_OF_DOCUMENT_TOKEN_TO_BE_REPLACED

Jimmy Katz leads many lives. He is the preeminent currently active jazz photographer, and has shot more than 200 magazine covers and over 600 recording … END_OF_DOCUMENT_TOKEN_TO_BE_REPLACED

Take a look at Blue Note Records’ release schedule for 2022 and it’s hard to miss the significant percentage of electronic-oriented music. In March, the … END_OF_DOCUMENT_TOKEN_TO_BE_REPLACED