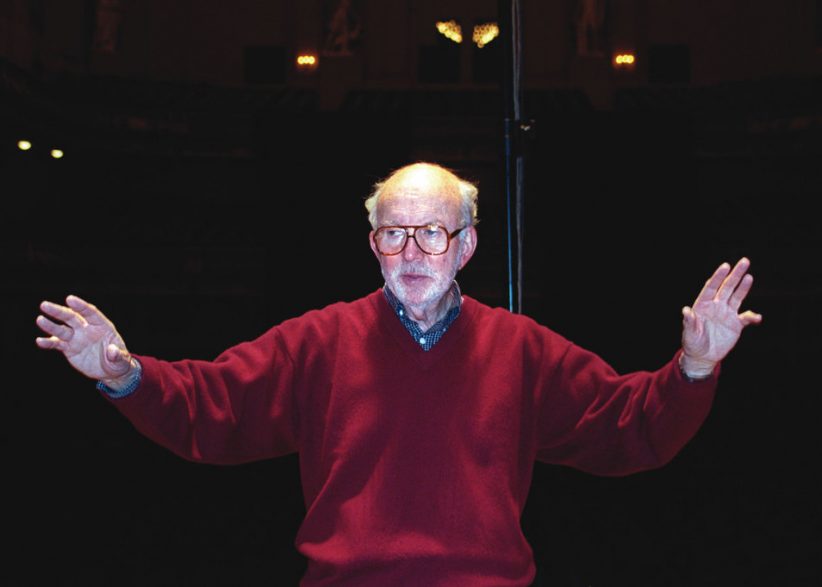 “I’m still out there,” says Lennie Niehaus, looking trim and vigorous, a 78-year-old with plenty of miles left on his odometer. “Last year I did two movies and a six-hour miniseries, and a couple of years ago I went to England to conduct the BBC Jazz Orchestra.”

Not bad for a guy who was playing alto saxophone with the Stan Kenton Orchestra in 1951; has scored, arranged or composed the music for 17 movies produced or directed by Clint Eastwood; and who won an Emmy award for his score for the Showtime film Lush Life.

And his horn is always within easy reach.

“I keep it out all the time,” he says. “They tell me it’s bad for the pads, but if it’s in the case I think, ‘Oh, gee, I have to unzip the case’—I have the hard bebop bag—’attach the neck, put on a reed.’ But this way I have it on the sax stand, and it’s sitting there waiting.”

In another scene, the music called for Whitaker to finger an especially tricky passage while finger-syncing to the track for “Laura.” When he hit a G instead of a G#, Niehaus called for a new take.

“Clint said, ‘What for?'” Niehaus says with a laugh. “I told him, ‘Well, we have a little technical problem.’ So we did another take. But this time, Forest was standing there holding his horn with his right hand, while his left hand was in his pocket. I said, ‘I’ve never seen a jazz player put his hand in his pocket in between solos.’ Forest said, ‘What should I do?’ And I said, you can put your hand on the bell, or maybe look at the oboe player. So, OK, take two. But now Forest is standing there looking at the second violin player, who isn’t playing anything. So I said, ‘Clint, we need another take.’ Well, Clint’s a one-take guy; two at the most, so you can imagine his reaction. But we eventually got it.”

Niehaus’ close creative relationship with Eastwood has reached well beyond jazz, however, via the varied music for films such as Space Cowboys, Midnight in the Garden of Good and Evil, The Bridges of Madison County and Unforgiven. Their relationship dates back to the early ’50s, when they met while serving in the military. But it took a while for Niehaus to establish his credentials as a film composer before he got together with Eastwood.

After playing with Kenton for three months, Niehaus was drafted into the Army. His discharge two years later serendipitously occurred when Lee Konitz was leaving Kenton, and Niehaus immediately returned to the band. By 1959, he’d had enough of the touring life of a big-band musician.

“I wanted to go back home,” he says. “My daughter was three years old, and I didn’t want to be on the road forever, like Harry Carney with the Duke Ellington band. Somebody sent me an itinerary of where we played on some of those Kenton tours. Sometimes, like in Ohio, we’d play a lot of cities, fairly close together. But in Texas, we’d make these 300- or 400-mile trips between nights. I could never do that again.”

Niehaus shook his head and smiled. “I can barely, when I play a gig here, get from Thousand Oaks, where I live, to West L.A., and that’s only like 30 miles.”

He also wanted to get into writing. Born into a musical family in St. Louis, he was raised in Los Angeles from the age of seven. His father played the violin, his sister played the piano, and Niehaus became adept on violin, oboe and bassoon before taking on the alto saxophone.

But none of those credentials or skills meant much in the world of film and television composing.

The more success Niehaus had as a jazz artist, as one of the highly visible figures in the West Coast jazz movement of the ’50s and early ’60s, the more he became typecast, at least insofar as the film and television business was concerned. From a jazz perspective, however, he was a rising star. On his mid-’50s recordings for Contemporary he led groups influenced by Mulligan’s pianoless quartets, and wrote compositions and arrangements that helped to define the open airiness of the West Coast style.

“When I first left Stan, I was known as a jazz alto player and a jazz writer,” says Niehaus, in a modest understatement. “I knew I could handle the demands of writing for film or television. I’d gone to the university for five years. I’d studied composition, orchestration and all that. I studied 12-tone with Ernst Krenek. But I always got this, ‘Well, you’re a jazz alto player. Can you write for strings?’ Yeah, I can write for strings. ‘Can you write for a full orchestra?’ Yeah, I can write for a full orchestra.”

So, little by little, at that time, Niehaus began to minimize his established identity, encouraged by the successes of such jazz-oriented film composers as Henry Mancini, but convinced that he would have to redefine himself to make a similar breakthrough.

“I just sort of moved away from playing,” he says, “because I knew it was what I had to do. So I’d say, ‘Yeah, I play jazz,’ and sort of low-profile it, not make a big deal out of it.”

Orchestrating assignments for the late Jerry Fielding, another composer with a jazz background, was the initial breakthrough for Niehaus, who worked on dozens of shows with Fielding. A reunion with his old Army buddy Eastwood followed. From 1985’s Pale Rider to 2002’s Blood Work, he was musically involved in a long, uninterrupted string of Eastwood-directed films, and the connection continues, with Niehaus often serving as orchestrator (and more) for musical themes composed by Eastwood.

He has also been busy with other projects, composing music for shows such as Amazing Stories, Titanic (the television version), The Child Saver and The Jack Bull, as well as the animated movie Pocahontas II. In 1996 he was commissioned to write the “Eastwood After Hours Suite” for a tribute performance at Carnegie Hall.

Despite his initial need to distance himself from his jazz roots, Niehaus’ film music, especially for Eastwood, always retained its jazz empathy. Like Mancini, Fielding and Dave Grusin, his compositions and orchestration glowed with the harmonic subtleties and rhythmic undercurrent intrinsic to musicians who have come up through jazz. In pictures such as City Heat and Bird, Niehaus could permit those qualities to fully rise to the surface. But his work with the very different scores for The Bridges of Madison County, Pale Rider and Space Cowboys (to mention only a few) are the product of a musical imagination that values the same sort of emotional layering that one finds in the best jazz works.

“I’m not sure what I’ll do next, in the way of recording,” he says. “But I’ll do something. Playing the horn gives me something that nothing else can. And I’m still completely connected to it. My fingers still work. I pick up my horn and, no matter how busy I am on another project, I never seem to lose the technique.”

When you’re on TV, everybody knows you, or at least thinks they know you. Take Kevin Eubanks, who was on NBC’s Tonight Show five nights … END_OF_DOCUMENT_TOKEN_TO_BE_REPLACED

Jimmy Katz leads many lives. He is the preeminent currently active jazz photographer, and has shot more than 200 magazine covers and over 600 recording … END_OF_DOCUMENT_TOKEN_TO_BE_REPLACED

Take a look at Blue Note Records’ release schedule for 2022 and it’s hard to miss the significant percentage of electronic-oriented music. In March, the … END_OF_DOCUMENT_TOKEN_TO_BE_REPLACED