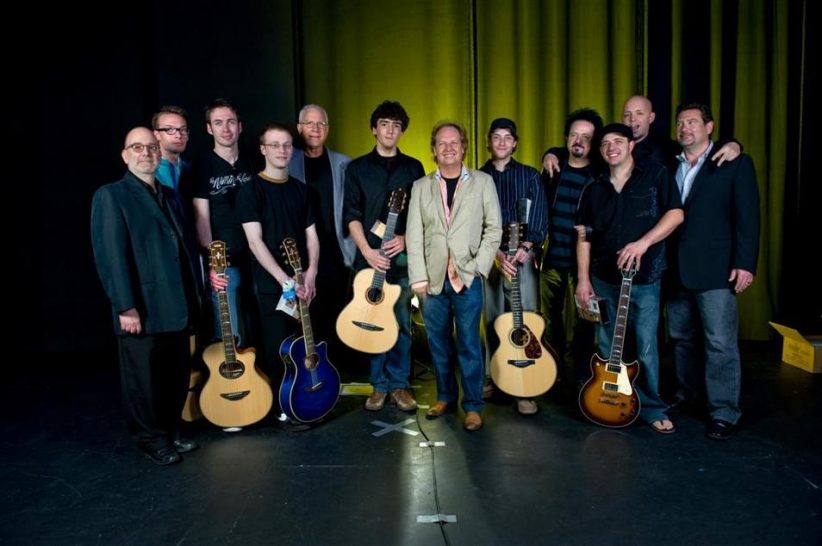 Lee Ritenour has been playing guitar for 50 years, and to celebrate he decided to make an album that, to paraphrase the liner notes to 6 String Theory (Concord), is a Lee Ritenour record but isn’t a Lee Ritenour record. Instead of shining the spotlight solely on himself, the versatile veteran musician and composer invited nearly 20 other string-benders to contribute, many A-list names in their own right. Joining these guitar gods were other musicians who haven’t yet achieved that level of fame but deserve to, among them 16-year-old Canadian classical guitar prodigy Shon Boublil, who won a Yamaha-sponsored competition that landed him a Berklee scholarship and a solo piece that wraps up the album. “I started out with a core group: John Scofield, B.B. King, George Benson, Pat Martino and Steve Lukather,” says Ritenour, 58. “Those were the first guys I called. I said, ‘I really need you on this project.’ They all tentatively said yes right off the bat. It’s really not just a Lee Ritenour record but it certainly is my vision and my dream project.”

Among the other guitarists who ultimately signed on were Slash, Mike Stern, Taj Mahal, Joe Bonamassa, Neal Schon (of Journey fame) and Robert Cray. One standout track, King’s “Why I Sing the Blues,” features King, Keb’ Mo’, Jonny Lang and country picker Vince Gill-each taking a guitar solo and vocal turn-while other tracks put Ritenour into smaller-group settings or leave him out of the picture all together. The general concept behind the album, Ritenour explains, was to showcase his lifelong interest in the instrument and its relationship to multiple genres. “I think [Ritenour is] one of the greatest guitar players ever,” says Scofield, who plays on “Lay It Down,” the album’s leadoff track. “His stylistic breadth, that blows me away. There are very few people I know that can play classical guitar and jazz and funk and all that. He’s prodigious-he really can do all this stuff.”

“Even as a kid I appreciated jazz and rock and blues and classical and country,” says Ritenour. “Anyone who could really play the guitar well I was checking out, from Chet Atkins to Segovia. I did not want this to be a shredding guitar album where a normal person puts it on and after a couple of songs says, ‘OK, thank you, next.’ I really tried to weave every piece together. I soon realized, even to my surprise, how different-tonally, musically, rhythmically-every guitar player was and how they had their own sound.”

Ritenour deliberately kept the instrumentation uncluttered, eschewing acoustic piano and relying primarily on electronic keyboards and organ (Joey DeFrancesco appears), bass, drums and vocals to fill out the sound. On some tracks, including Benson’s two entries, Ritenour doesn’t even participate as a player, keeping his involvement to that of co-producer (along with John Burk) and general facilitator.

One highlight, “L.P. (For Les Paul),” features Ritenour, Martino and DeFrancesco, with Will Kennedy drumming. “The whole tune came out in about 10 minutes,” says Ritenour, who wrote the tribute number. “Then I sent it off to Pat.” Although they’ve known each other for decades, the two had never before played together. “I took a big gulp,” says Ritenour, who counts Martino among his greatest influences.

Martino echoes the admiration. “Lee is very gifted,” he says. “When someone can retain their grace as an individual and as an artist, that’s a very rewarding experience, and he has done that. It was a challenge to participate in that particular composition. It’s a memory of some of the melodies that Les played, and Lee captured that.”

For Ritenour, 6 String Theory isn’t so much a culmination as a marker in a ridiculously prolific career that began when he was still in his teens. Recognized early, he quickly became an in-demand fixture within the highly competitive Los Angeles studio scene, laying down guitar lines on an estimated 3,000 sessions for artists as diverse as Pink Floyd, Barry White and numerous jazz artists. Ritenour’s debut solo album, First Course, was released in 1976, and has been followed by dozens more, among them the commercially successful Rit (1981), the Brazilian-themed Harlequin, with Dave Grusin (1985), and 1990’s Stolen Moments, which Ritenour calls “my jazziest album.” In the ’90s he also co-founded Fourplay, an all-star jazz-funk quartet featuring keyboardist Bob James, bassist Nathan East and drummer Harvey Mason. He left the group after it released its third album.

Needless to say, Ritenour’s list of contacts in the music business is a mile long: One of the major dilemmas facing him during the planning of 6 String Theory wasn’t finding friends to participate but winnowing the list down and juggling schedules. “Getting all of the guitarists together, that was the number-one most important and difficult thing to do,” he says. “Then came picking the music, arranging the music and in some cases composing the music. When we finally hit the studio, that was the easy part. The playing was a blast and just magical. All of the guitarists were in a great mood and were incredibly gracious and played their butts off. As Steve Lukather said, ‘We could just go in there every week and make a record.'”

Guitarist Will Bernard bears the bittersweet blessing of virtuosic skill and eclectic taste, making his music a perpetual delight and yet hard to categorize. Maybe … END_OF_DOCUMENT_TOKEN_TO_BE_REPLACED

At 95, Chicago-based guitarist George Freeman is among the world’s oldest active jazz musicians. Although he came of musical age in the 1940s and counts … END_OF_DOCUMENT_TOKEN_TO_BE_REPLACED

When you’re on TV, everybody knows you, or at least thinks they know you. Take Kevin Eubanks, who was on NBC’s Tonight Show five nights … END_OF_DOCUMENT_TOKEN_TO_BE_REPLACED