Skip to content
Become a member and get exclusive access to articles, live sessions and more!
Start Your Free Trial
Home > Features > Lee Konitz: On His Own Terms 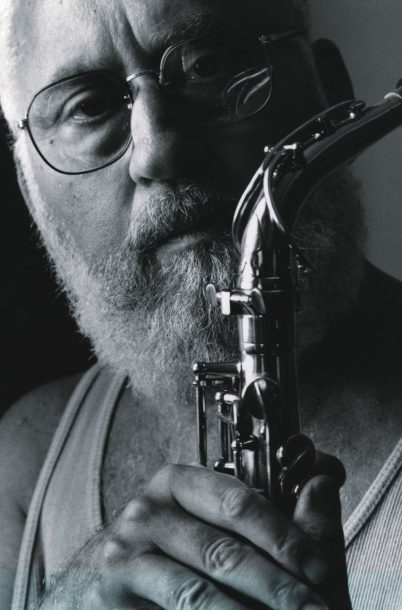 Great jazz can be like a flurry of snowflakes. No two solos, or phrases, are alike, and the subtlest inflections attached to each note are one-of-a-kind. The greatest jazz players—the innovators—are also one-of-a-kind. Lee Konitz is this kind of player, a professional improviser on the alto saxophone for 50 of his 70 years. He has never been the hottest alto man or the fastest-moving. His impact on the scene has been glacial. In carving his own unique path, he has left the landscape of jazz permanently altered.

“There was a program at Lincoln Center,” recounts Konitz, sitting in an armchair in the living room of his Upper West Side apartment. “One of Wynton’s programs, with Phil Woods, Jackie McLean, and me, and Milt Jackson, talking about the ’50s. I mentioned something about paying lip service to creative approaches, but that if you really tried to do something different, you’d get put down like hell. Look at Ornette! Almost simultaneously, Phil and Jackie looked at me and said, ‘We hated you!’ I stood up and took a bow. I mean, I knew that. I hated myself, frequently, for not being part of their group.”

Far from being an outsider, Konitz today is treasured by the jazz community, at least in Europe. “I work hardly at all in this country,” he states matter-of-factly, echoing generations of jazz musicians before and after him. He is on the cusp of his most prolific period, in terms of recording. He made ten albums last year, mainly for European labels. By May of this year, he had already accrued nine more. Five years ago, in 1992, he was awarded the prestigious Jazzpar prize in Copenhagen. “That was a very special honor, and it took the Danish people to pull that off. Unfortunately, we haven’t come around to doing that yet. We have the MacArthur fund, but that’s not just for jazz musicians.” He spends more time than he would like on transatlantic flights. “I feel that’s what I’m getting paid for, the travelling,” he says, philosophically.

One recent addition to the Konitz discography is his tribute to Lady Day, Strings for Holiday (enja). With the aid of a seven-piece string section and whiz kid drummer Matt Wilson, Konitz scrutinizes twelve standards Billie Holiday called her own. The non-saccharin string arrangements are by Swiss composer Daniel Schnyder. “He has written symphonies, and operas, and ballets,” comments Konitz. “He’s a serious composer, and a fine saxophone and flute player. And, because he isn’t really a mainstream jazz player, the writing took on a bit of a different perspective. It didn’t just sound like background music. With an interesting background going, I felt a lot of times like I was accompanying the strings, and I liked that feeling.” Konitz refers often to the feelings he undergoes making music in various contexts. Such sensitivity has no doubt contributed to his highly individualistic technique and expression. “It was very important to me as a player to be able to play some nice melodies as a singer would play them,” he goes on. “I’ve always tried to do that, and it’s not really easy to do, to play some of these 40- or 50-year old melodies like you just made them up.”

The melodic, harmonic and contrapuntal innovations of the pianist and pedagogue Lennie Tristano remain at the core of the Konitz style. It is striking how much Konitz still talks about his former teacher, who died in 1978. Konitz met and played with Tristano for the first time in Chicago in the early ’40s (both were native Chicagoans). Later, after coming to New York with the Claude Thornhill band in 1948, Konitz joined the group of musicians who gathered around Tristano at his home in Queens. “Unfortunately, he didn’t choose to go out and meet people and give them the opportunity to hear him play. That was a great loss for him and the people. He was very critical of the scene, and people, I think, kind of resented him for that. But the fact remains that he was a great pianist who affected a lot of people.” Bill Evans and Herbie Hancock are among the pianists who reveal a strong Tristano influence, according to Konitz. (For a closer look, see the chapter entitled “Lennie Tristano and Lee Konitz,” in Ira Gitler’s book, Jazz Masters of the ’40s.)

In 1949, while he was writing and recording tunes such as “Subconscious-Lee” and “Ice Cream Konitz” with the Tristano gang, Konitz was also rehearsing and recording with the famous Miles Davis nonet. “That was a chamber group,” Konitz explains, “and it must be clarified that it was not the ‘birth of the cool.’ If anything, I would think Lennie Tristano’s stuff was more the ‘birth of the cool,’ in some respects.” As Davis explained in his autobiography, Miles, the nonet was, in fact, an attempt to capture the sound of the Thornhill band in a small group, hence the participation of Thornhill sidemen Konitz and Gerry Mulligan, and arranger Gil Evans.

Over the years, Konitz’s tone, criticized in the Parker era for its nonconformity, has acquired a distinctive robustness—marvelously, without sacrificing any of its essential, lemony, almost flute-like character. “My sound has changed in many respects,” Konitz reflects. “That it’s still identifiable is interesting to me. I obviously didn’t care to continue a familiar style. I had to go as I felt, and then I was very gratified that people still acknowledged me. I’m playing the most flexible instrument of all the instruments, and I’m trying to flex on it as much as possible. It’s been a conscious effort. I’ve just tried to open up as much as possible, in all ways, to make the music more expressive.”

One admirer of the Konitz sound, who used it to great advantage in the ensemble context, on The Birth of the Cool and Miles Ahead in particular, was Gil Evans. Although Evans is not known to have studied with Tristano, his writing supported the Tristano virtues: asymmetrical melodies, extended harmonies and counterpoint. Moreover, Evans, like Tristano, shunned the spotlight and seemed to live only for the music. Konitz provides a fascinating glimpse: “A few years ago we were invited to do something in Rome. Someone booked a week or so of duo concerts for us, and he was very reluctant to do that, because he didn’t think of himself as a piano player. If you could picture the two of us in a La Scala-type hall, in some city in Italy, playing a tempo that would practically stop, and have ‘Bravo! Bravissimo!’ afterwards! At one point he looked at me and said, ‘You mean to tell me I can travel without schlepping that band around, and just play the piano like this? Great!’ And then he cancelled the next tour we had, in California, saying, ‘I’ve got to go in the woodshed…'”

“I would like to be a superstar and make all that money and travel first class,” Konitz declares, finally, “but I haven’t quite made that. It’s nice to see someone like Joe Henderson, who deserves it, getting that. But I figured out a long time ago that I was going to win by default.” His chops curl up into a mischievous grin, as the steam radiator clangs loudly in the background. “I’d be the only one left: Wow, he’s a great alto player!”

“At the moment I’m playing my very first alto. I have about six altos that I’ve changed around from. I come back to this one as a comfortable shoe or glove. It’s a Selmer—21,000 is the serial number—a special edition of a so-called Balanced Action.”

When you’re on TV, everybody knows you, or at least thinks they know you. Take Kevin Eubanks, who was on NBC’s Tonight Show five nights … END_OF_DOCUMENT_TOKEN_TO_BE_REPLACED

Jimmy Katz leads many lives. He is the preeminent currently active jazz photographer, and has shot more than 200 magazine covers and over 600 recording … END_OF_DOCUMENT_TOKEN_TO_BE_REPLACED

Take a look at Blue Note Records’ release schedule for 2022 and it’s hard to miss the significant percentage of electronic-oriented music. In March, the … END_OF_DOCUMENT_TOKEN_TO_BE_REPLACED