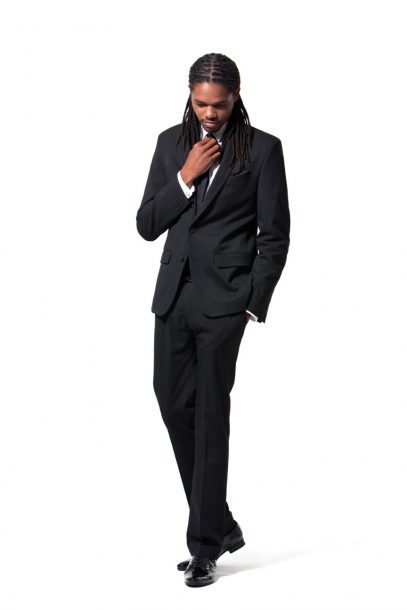 For all their hype and ratings-grabbing popularity, primetime talent-search shows have launched embarrassingly few solid music careers. Though American Idol and America’s Got Talent have to date delivered a combined 16 victors, most of them have been reduced to showbiz footnotes. But Landau Eugene Murphy Jr., the lanky, gap-toothed West Virginian who nabbed the AGT million-dollar prize last September, seems set to buck the famous-for-15-minutes trend. The 37-year-old father of four is already the first jazz-oriented winner, and the only one whose triumph was shaped by the Great American Songbook.

Murphy’s youthful passion for standards, particularly the songs of Frank Sinatra, began with the TV sitcom Married With Children, which used Sinatra’s “Love and Marriage” as its theme. Though his pals would tease him about his unusual taste in music, he refused to be deterred. “When I was on the basketball court,” he says, “and I’d dunk on somebody, I’d sing ‘Fly Me to the Moon.’ Or when I was moving in close, I’d sing ‘I’ve Got You Under My Skin.’ Whenever I sang, people would say, ‘You sound like that Frank guy.'”

Once Murphy was old enough, he’d sing at any bar, and any community or charity event, that would have him. He joined a blues-soul group called Top Shelf that earned significant success around his hometown of Logan, but creative differences-his bandmates wanted to do exclusively R&B material; he wanted to sing Cole Porter-led to a split. He went back to doing charity shows, supporting his family by working at a car wash. Late last spring, while he and his wife were visiting her recently widowed mother, their apartment was broken into and all of its contents were stolen.

A few days later, having reached the lowest of low points, Murphy says, “I sat down on the bed and God spoke to me. He said, ‘Son, you need a bigger stage.’ At that exact moment, AGT came on the TV. I jumped up, ran downstairs and told my wife that everything was going to be OK. I signed up online and borrowed money to fly up to New York.”

Waiting in line for 12 hours, wearing the only clothes he owned, Murphy was the last of the New York hopefuls to audition. Though judges Sharon Osbourne, Piers Morgan and Howie Mandel seemed skeptical when the dreadlocked singer took to the stage, his performance of “I’ve Got You Under My Skin,” the resemblance to Sinatra uncanny, blew all three away. Week after week, as he progressed through the ranks, he remained true to his Rat Pack mandate, singing “I Get a Kick Out of You,” “I’ve Got the World on a String” and “Ain’t That a Kick in the Head,” but intentionally saving “My Way” for the million-dollar payoff.

After the big win, Murphy signed with Columbia Records, coincidentally the label that launched Sinatra’s solo career. To oversee what would become That’s Life (released last November), Columbia brought in producer-turned-crooner Steve Tyrell. The biggest challenge, says Tyrell, was to de-Sinatra Murphy: “On the show he was encouraged to sound just like Sinatra, but when we did the album I wanted him to sound like Landau. That was the hardest part for him, because doing what he’d been doing had earned him a million dollars. When you listen to songs he was approaching for the very first time, like ‘Witchcraft’ and ‘Night and Day,’ you can hear the difference, and his performance of ‘That’s Life’ is amazing.” Following pre-production in Houston, the 11 tracks were recorded at L.A.’s Capitol Studios, where Sinatra created so many of his landmark albums.

Joining Murphy on the record, dueting on “Somethin’ Stupid” and “Baby, It’s Cold Outside,” is Tyrell protégé Judith Hill. He first encountered her when he was producing Rod Stewart’s Soulbook and she was among the backup singers. Subsequently plucked by Michael Jackson to accompany him on the world tour that never happened (she can be seen in the Jackson documentary This Is It), Hill is currently completing her own album of all-original material and also wrote and sings 10 songs in the forthcoming Spike Lee film Red Hook Summer. Of Murphy, she says, “I think he’s amazing. He’s being compared to greats like Sinatra and Nat King Cole, and he deserves it. He understands their nuanced style.”

As for his future, Murphy intends to keep Logan, W. Va., as home base and plans to “stay in the same musical groove.” He’d like to pay tribute to Cole on his next album and, down the road, cover some Marvin Gaye songs. “Landau has tapped into something that no one else has done,” says Tyrell. “There’s not been an African-American artist who has brought this music to a new generation, and I’m going to encourage him to take this treasure chest and mine it as much as he can.”

When you’re on TV, everybody knows you, or at least thinks they know you. Take Kevin Eubanks, who was on NBC’s Tonight Show five nights … END_OF_DOCUMENT_TOKEN_TO_BE_REPLACED

Jimmy Katz leads many lives. He is the preeminent currently active jazz photographer, and has shot more than 200 magazine covers and over 600 recording … END_OF_DOCUMENT_TOKEN_TO_BE_REPLACED

Take a look at Blue Note Records’ release schedule for 2022 and it’s hard to miss the significant percentage of electronic-oriented music. In March, the … END_OF_DOCUMENT_TOKEN_TO_BE_REPLACED