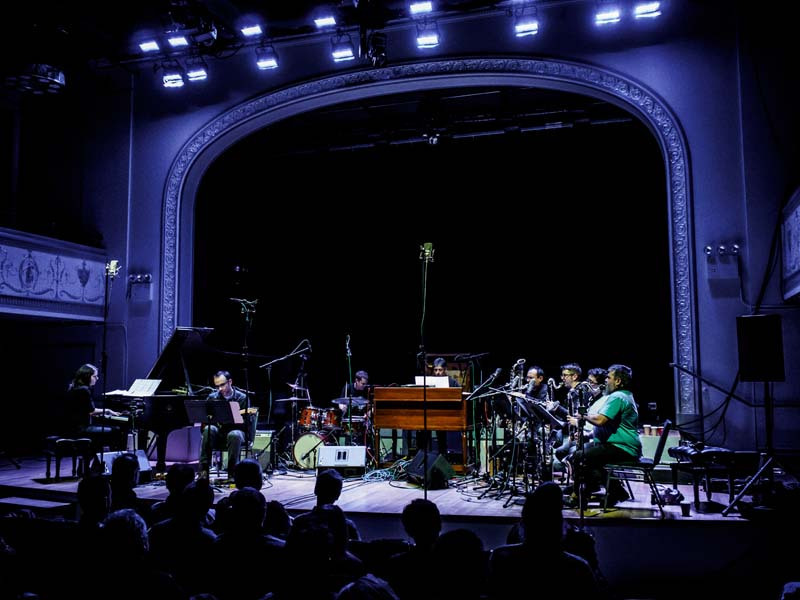 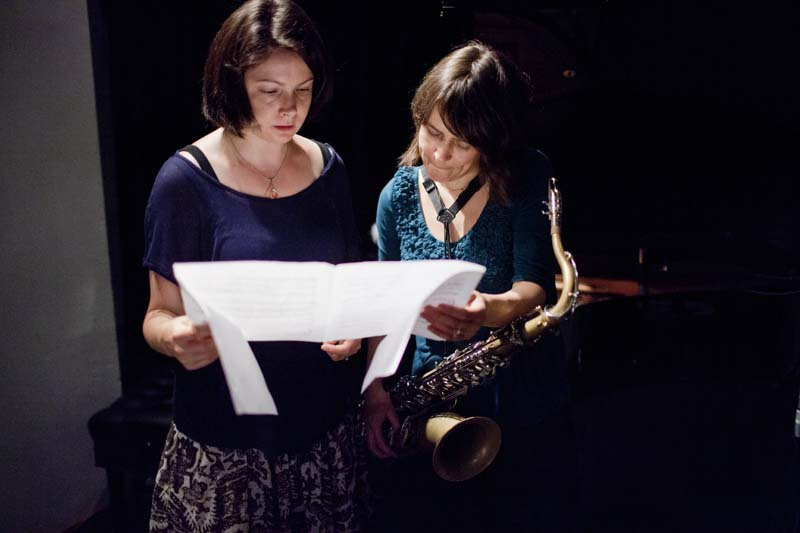 It’s no small honor to land a six-night residency at the Stone, a dark and cramped room in Lower Manhattan that nonetheless remains one of the world’s leading avant-garde music venues. Recent invitees have included Bill Laswell, Joe Lovano, Steve Coleman, Tim Berne and Uri Caine. When we met up with pianist Kris Davis, she was preparing for her own six nights in residence, from June 24-29. To look over the lineups was to think anew about her prolific output and steady ascent as one of the most distinctive musicians of her time.

Davis was planning a solo piano set along the lines of her CDs Aeriol Piano and Massive Threads. She would lead the quintet heard on her 2013 Clean Feed release Capricorn Climber. She’d also play in bands led by drummer Tom Rainey, bassist Kermit Driscoll and saxophonist Ingrid Laubrock. “On Friday I’m doing a pared-down version of Infrasound,” Davis said, referring to the band with four bass clarinets that premiered early this year at Brooklyn’s Roulette. “On Sunday, Ingrid, [guitarist] Mary Halvorson and I are playing trio. I call that Death Rattle because I wanted something so unfeminine. We have a really cool connection between the three of us, though it ended up being kind of tonal and pretty. Perfect, Death Rattle!”

We’re at a coffee shop in Brooklyn’s Kensington neighborhood, where Davis moved only a month ago with her husband, guitarist Nate Radley, and their 10-month-old son, Benjamin. She and Radley, a member of Infrasound, tied the knot almost two years ago. It’s a new life chapter for Davis, and what better way to welcome it than her 2014 trio effort, Waiting for You to Grow. Dedicated to “this little man,” as Davis calls Benjamin in the notes, the album features her with Rainey and bassist John Hébert in a turbulent, contemplative follow-up to their 2010 release, Good Citizen. “On the first trio CD I had this concept to make it almost like a pop record, where the tunes are really short,” Davis says. “On the new record the tunes are much longer and explore multiple areas. I just wanted to write and not have any preconceived ideas.”

Born in Vancouver in 1980 and raised in the suburbs of Calgary, Davis began classical piano studies at age 6. Her classical background continues to inform her work in fundamental ways. But in junior high and high school she noticed that “all the popular kids played in the jazz band,” so she joined too, and her teacher introduced her to My Funny Valentine and ‘Four’ & More by the Miles Davis Quintet. “That’s where it started,” Davis says. “By the eighth grade I knew I wanted to be a jazz musician.”

Davis moved east after high school to attend the University of Toronto, majoring in jazz piano. “I always knew I wanted to move to New York, so it was kind of a stepping stone,” she says. “But it was four years of bliss, just playing all the time.” Studying with Brian Dickinson and Gary Williamson, Davis began to improve her technique by leaps and bounds. “I’d been learning the repertoire but not really learning how to play the piano,” she recalls. “[Gary] had exercises where you’d drop your hands on the piano, trying to get the bounce right. A lot of students had pain, so he dealt with that as well. It was really funny: I’d come back after a week and drop my hands on the piano and he’d say, ‘Nope, that’s not it.’ Same thing a week later, for a year. And then one day he said, ‘Yep, that’s it.’ As soon as I did it, I knew. And it totally changed the way I play and approach the piano. I still use all those exercises to warm up.” She’s currently planning two books of original etudes-one for kids, the other more advanced.

Davis’ two biggest piano influences early on were Herbie Hancock and Keith Jarrett. “For a long time I just transcribed like crazy,” she says. “With Keith, it was his melodic approach to playing standards. I transcribed a lot of the trio stuff. It felt like his solos were one long melody. That was always a big influence for me, even if it veered off into other things.”

Despite her focus on sounds outside the jazz mainstream, Davis insists on the importance of learning standard repertoire and playing on changes. “When I first was looking at colleges,” she recalls, “people would say, ‘Avoid schools that teach the tradition. That music is dying; there’s no point.’ Now I believe more than ever it’s super-important to experience that. Learning how to play time in a certain way, learning how to improvise with certain tools, being able to connect with someone over a tune and relate to a tune: Harmonically and linearly it all affects the way that you play improvised music. You want to check out as much music as possible. It will widen what you can draw from.”

When you’re on TV, everybody knows you, or at least thinks they know you. Take Kevin Eubanks, who was on NBC’s Tonight Show five nights … END_OF_DOCUMENT_TOKEN_TO_BE_REPLACED

Jimmy Katz leads many lives. He is the preeminent currently active jazz photographer, and has shot more than 200 magazine covers and over 600 recording … END_OF_DOCUMENT_TOKEN_TO_BE_REPLACED

Take a look at Blue Note Records’ release schedule for 2022 and it’s hard to miss the significant percentage of electronic-oriented music. In March, the … END_OF_DOCUMENT_TOKEN_TO_BE_REPLACED