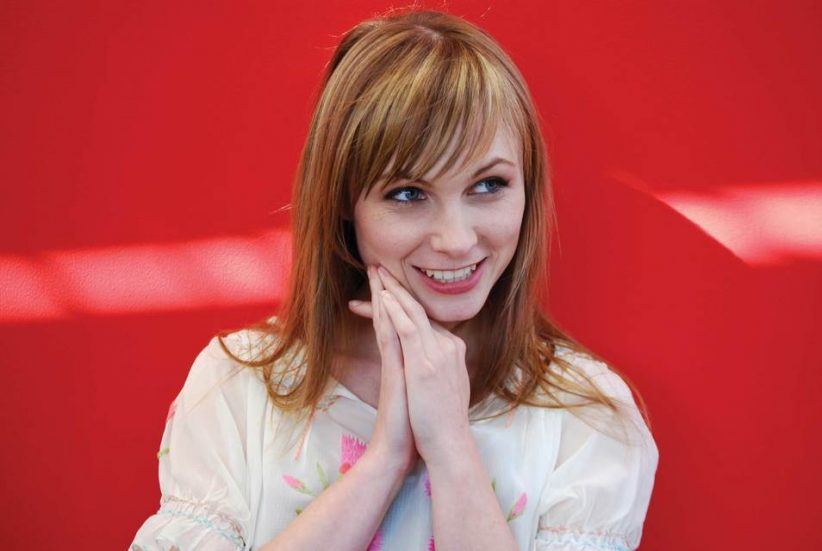 Take to the Sky. It’s the title of the debut album from fast-rising vocalist Kat Edmonson, but it might easily be mistaken for the name of a splashy, Technicolor MGM extravaganza starring Ann Miller or Jane Powell.

The suggestion delights Edmonson, who admits that classic Hollywood musicals originally fueled her love of music. Indeed, though she regularly draws comparisons to Blossom Dearie and Billie Holiday, Edmonson confesses that female singers weren’t her early idols. She wanted to sound like Frank Sinatra or Bing Crosby or Gene Kelly and, she adds with a giggle, “really resented the fact that I didn’t! But I’ve since learned to really appreciate my voice and what I can do with it.” Many others share that appreciation. Released a year ago, Take to the Sky has earned near-unilateral raves. So have Edmonson’s live performances, a jam-packed schedule that has taken her from local club dates in her hometown of Austin to a set at the Tanglewood Jazz Festival, a gig that prompted Boston Globe jazz critic (and JT contributor) Steve Greenlee to single her out as possibly “the most promising American jazz singer to come along since Cassandra Wilson.”

Not bad for an American Idol reject. That was in 2002, when Edmonson tried out for the show, progressing to the final 48 before being dismissed by Randy Jackson for lacking star quality. Now that Edmonson has proved the Idol judge so utterly wrong, does she harbor any desire for revenge? “I’d like to say that that would be beneath me,” she says, “but I’ll admit I do have fantasies about it. But the truth is I wasn’t cut out for it. The other day I was driving back to Austin from Houston and Randy Jackson’s Hit List came on the radio, and I just thought how grateful I was that I didn’t make it on American Idol because I’d be in the midst of doing things I really don’t want to do. My goal is not to be famous. I simply want to do what I want to do creatively and collaborate with musicians I admire.”

High atop Edmonson’s admiration list is her personal and professional partner, pianist Kevin Lovejoy, who served as both arranger and producer for Take to the Sky. Much of the album’s magic is derived from the smart, intriguing ways in which Edmonson and Lovejoy approach everything from Gershwin, Porter and Mancini gems to tunes from John Lennon, the Cure and the Cardigans.

“We were always looking for the best approach,” she explains. “We wanted to trim the fat off everything, and then allow the songs to develop naturally. We worked on them for over a year, and each one had its own unique process. With ‘(Just Like) Starting Over’ it was entirely Kevin’s idea. I had nothing to do with it. We heard the song one day and he said, ‘I know how we’re going to do this,’ and the arrangement on the album precisely matches his brilliant vision of what it was going to be. For ‘Just Like Heaven,’ we knew we wanted it to be a bossa nova, so it was a matter of stripping it down to make it sound as authentic and beautiful as a Jobim tune would sound. We simply asked ourselves, ‘How would Jobim produce this song?’ ‘Lovefool’ was an entirely different animal. We had a quirky idea for it. We wanted the tune to be provocative. It’s borderline crazy, and we wanted to capture that, so we began with an intense, serious horn arrangement and progressed to a full-on, wild mambo.”

To get Take to the Sky produced, Edmonson and Lovejoy decided to create their own label, Convivium. It’s not a word you’ll find in Webster’s, but it does show up in the online Wiktionary, defined as an ecological term for “geographically isolated populations that shows differentiation from other populations of the same species, [and become] a subspecies or ecotype.” Rather apt for an emerging Austin jazz singer carving a distinct path.

To stay on that path, Edmonson is carefully weighing her options. Major labels are wooing her, and she’s excited about the offers being made. But, she quickly adds, “I’m being very patient and careful about making any kind of deal. I got into this business to do what I want to do, regardless of how I’m perceived, and feel very fortunate for having achieved some success on my own. Signing with a big label may not be relevant to what I’m aiming to do.”

Meanwhile, Edmonson says she has “about two-thirds of the songs chosen for the next album,” a playlist that will likely include a version of Dylan’s “Don’t Think Twice” that she and Lovejoy are currently developing “layer by layer.” She’d also love to fulfill a longstanding dream of recording with Tony Bennett. As Edmonson recalls, “When I was 9 years old he came to Houston. My mom and my godmother pulled up in mom’s minivan and said, ‘C’mon Katherine, get in the car. We’re going to get tickets to Tony Bennett.’ I didn’t know who Tony Bennett was, but they were playing his Steppin’ Out album full blast and singing along with all the songs. We got there and the show was sold out, so we never got to see him. But I stole the CD from my mom and played it over and over and over, and played it for my friends, who thought I was weird. Then I started buying his older albums. And ever since then, I’ve wanted to have the chance to sing with him. He is one of the main reasons I learned to love jazz.”

Jimmy Katz leads many lives. He is the preeminent currently active jazz photographer, and has shot more than 200 magazine covers and over 600 recording … END_OF_DOCUMENT_TOKEN_TO_BE_REPLACED

Take a look at Blue Note Records’ release schedule for 2022 and it’s hard to miss the significant percentage of electronic-oriented music. In March, the … END_OF_DOCUMENT_TOKEN_TO_BE_REPLACED

Those who are only familiar with bassist Martin Wind’s jazz credentials—both as a leader and as a first-call sideman for Bill Mays, Dena DeRose, Ken … END_OF_DOCUMENT_TOKEN_TO_BE_REPLACED

Have saxophone, will travel. With apologies to Paladin, that sums up the career of reed player Greg Abate. Since the early 1990s, he’s been a … END_OF_DOCUMENT_TOKEN_TO_BE_REPLACED