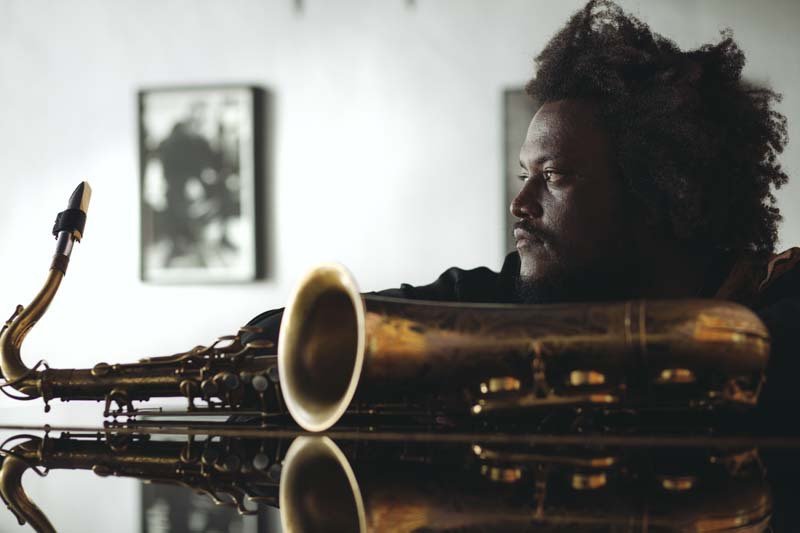 The Los Angeles-based tenor saxophonist Kamasi Washington, who has worked with Gerald Wilson and Stanley Clarke as well as with Snoop Dogg and Yasiin Bey, does not do small. The Epic, his first release for rapper and electronic-music producer Flying Lotus’ Brainfeeder label, is three discs of assertive, unrelenting spiritual jazz. His band, the Next Step, is 10 musicians strong: two drummers, two bassists, two pianists, three horn players and a vocalist. And on the album that ensemble is augmented by an orchestra and a choir, the latter of which brings both a psychedelic edge and a religious fervor to the music. Then there’s Washington’s playing. He is a powerhouse tenorman of the first degree, dispatching solo after explosive solo to the furthest reaches of the cosmos. The concept for The Epic sounds like some sort of jazz-musician fantasy-“What if we added strings and voices to a well-oiled postbop little-big-band?” But make no mistake, The Epic is a fully realized idea. A triumph, even.

Born into a musical L.A. family in 1981-his father is a saxophonist and his mother plays flute-Washington picked up the sax at age 13. But even before he touched the instrument he had started gathering the members of the Next Step-drummers Tony Austin and Ronald Bruner Jr., double bassist Miles Mosley, electric bassist Stephen “Thundercat” Bruner, acoustic pianist Cameron Graves, keyboardist Brandon Coleman, trombonist Ryan Porter, trumpeter Dontae Winslow (Igmar Thomas subs for Winslow on the album) and vocalist Patrice Quinn-as friends. “Ronald Bruner and I have been [close] since we were babies, since I was 3,” says Washington. “I knew about Stephen Bruner when he was an idea, when his parents were thinking about having another baby.”

Another of Washington’s pals, alto saxophonist and producer Terrace Martin, was one of the main forces behind rapper Kendrick Lamar’s jazz-heavy 2015 album, To Pimp a Butterfly, a commercial and critical success also featuring Thundercat, vocalist Bilal, pianist Robert Glasper and trumpeter Ambrose Akinmusire. After hearing The Epic before it was released, Martin tapped Washington to write string arrangements for Butterfly. (Washington also wound up playing sax on the songs “u” and “Mortal Man.”) “On this Kendrick record,” says Martin, “he had never done strings for something like this, but what I heard on his record, I was inspired, like, ‘Yo, why don’t you come and bring some of that energy on some of these records over here.'”

Washington recalls that “security was really tight” during the Butterfly sessions. He wasn’t allowed to bring tracks out of the studio, so he had to write his arrangements on the spot. “Kendrick was sittin’ on a couch, watching me,” remembers Washington. “[Producer] Sounwave and Terrace in there, helping me sing parts along with what I’m doing. I’m just doing them on the piano. I’m like, ‘Aw, this is gonna be the strings. This is gonna be the cello. This is gonna be the flute. Gonna be the French horn. This is gonna be the violas. The violins are playing this little trill up here.’ You know, a little something’s going on.”

Like Butterfly, Washington’s The Epic is the sort of album that could facilitate more interest in jazz within the younger demographic the music industry aims to please. But is a wider audience, regardless of age, ready for such willfully elaborate and complex music? Washington thinks so. “People aren’t … they’re not dumb,” he says. “They’re smarter than they probably ever, ever been. They get it. You just gotta reach out to them, just give them a piece of yourself and be honest with ’em. Not try to show them something, but just try to give them something, you know? That’s what it is.”

When you’re on TV, everybody knows you, or at least thinks they know you. Take Kevin Eubanks, who was on NBC’s Tonight Show five nights … END_OF_DOCUMENT_TOKEN_TO_BE_REPLACED

Jimmy Katz leads many lives. He is the preeminent currently active jazz photographer, and has shot more than 200 magazine covers and over 600 recording … END_OF_DOCUMENT_TOKEN_TO_BE_REPLACED

Take a look at Blue Note Records’ release schedule for 2022 and it’s hard to miss the significant percentage of electronic-oriented music. In March, the … END_OF_DOCUMENT_TOKEN_TO_BE_REPLACED