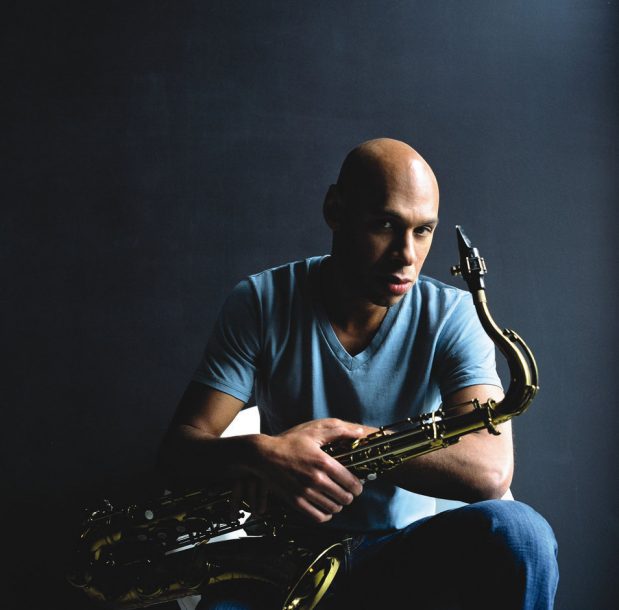 Joshua Redman didn’t set out to make a double-trio record, but once that notion entered his head, the tenor and soprano saxophonist knew he would have to go ahead and give it a try. The result, Compass (Nonesuch), doesn’t so much pick up where 2007’s critically lauded Back East left off as it takes the trio concept to another place altogether. Where Back East featured Redman working out amidst a number of bass-drum configurations-and augmenting them with guest saxophonists Joe Lovano, Chris Cheek and dad Dewey Redman, who passed away before the album’s release-Compass loses the additional horn players but ups the ante on the standard trio model by featuring, on several tracks, two bassists and two drummers playing with Redman simultaneously.

After he wrapped up touring behind Back East, Redman says from his home in Berkeley, Calif., he experienced what he calls “a burst of compositional productivity, which is very rare for me. I wrote 10 or so tunes for trio in a very short time, like in four or five days.

“Initially,” he says, “my conception was to find one trio-one bass player and one drummer-and just record these tunes and maybe release them as an album. But obviously things got a little out of control.”

Redman made plans to cut the new tunes with bassists Larry Grenadier and Reuben Rogers and drummers Brian Blade and Gregory Hutchinson-all except Hutchinson had been among the cast on Back East. Then, a couple of months before the sessions were scheduled to begin, the idea hit: “What would it be like to do some stuff with everybody together?”

Says Redman, “I went through this process of rejecting the idea as dangerous and probably foolhardy. But my instinct kept bringing me back to it. I had never done this before and I’d never been part of [anything like it] before. We had a couple days of recording laid aside, so I said, ‘Let’s take another day and start the session off with everybody together,’ with no expectation that anything was really gonna come out of it or that anything would end up on the record. The reason we scheduled it like that was so that we would try some of these tunes in the double trio on the first day, but if we didn’t feel like they worked out, we’d have the next two days to redo them in the individual trio format.”

Of the 13 tracks on Compass, Redman wrote most solo, Grenadier and Blade contributed one each, and the opener, “Uncharted,” is an improvisation credited to the four who play on it, which is everyone except Blade. For the straight trio tracks, Redman rotated the personnel so that each musician got a chance to play in that format with every other at some point during the sessions. That leaves five tracks featuring the entire crew, including the album’s sole interpretive piece, “Moonlight,” based on Beethoven’s “Moonlight Sonata.”

What makes the double trio tracks on Compass work, aside from the abilities and distinctive voices of the musicians themselves, is the decision by Redman (who also produced) and engineer James Farber to place one bass and drum team on the left side of the mix and the other on the right. The split keeps the jams from jumbling up and provides something of a surreal listening experience as the approaches by the two side-by-side rhythm sections shift radically and repeatedly.

“With all that sound, all these instruments occupying the same sonic spectrum, there was a real importance in each instrument having its space in the recording,” says Redman, “but at the same time, having everybody together. I tried to provide a very loose roadmap. I thought about different ways in which we might utilize this configuration so that every tune we tried like that would not be everybody playing at the same time. So on one tune I had the conception of bouncing things back and forth between the two rhythm sections or having one combination play at one time and the other combination play at another time and then build them up to everyone playing together.

“I relied on the instincts of the other musicians, and the mutual respect and trust that we had, to craft it as we went along. That was really the key: everyone embracing the concept. I think everyone had a certain sense of space and the importance of space in this context. We didn’t want a sense of separation, but a sense of place.”

That idea of place and space is essential to the album, hence its title.

“Compass,” Redman says, “refers to going on a journey and the sense of travel without a clear map, or even a clear sense of where you’re heading. The compass is what we use to orient ourselves. So I think, especially with the double trio, there’s a sense of sailing off into the unknown, a sense of adventure, but at the same time the importance of navigating through that.”

Guitarist Will Bernard bears the bittersweet blessing of virtuosic skill and eclectic taste, making his music a perpetual delight and yet hard to categorize. Maybe … END_OF_DOCUMENT_TOKEN_TO_BE_REPLACED

At 95, Chicago-based guitarist George Freeman is among the world’s oldest active jazz musicians. Although he came of musical age in the 1940s and counts … END_OF_DOCUMENT_TOKEN_TO_BE_REPLACED

When you’re on TV, everybody knows you, or at least thinks they know you. Take Kevin Eubanks, who was on NBC’s Tonight Show five nights … END_OF_DOCUMENT_TOKEN_TO_BE_REPLACED