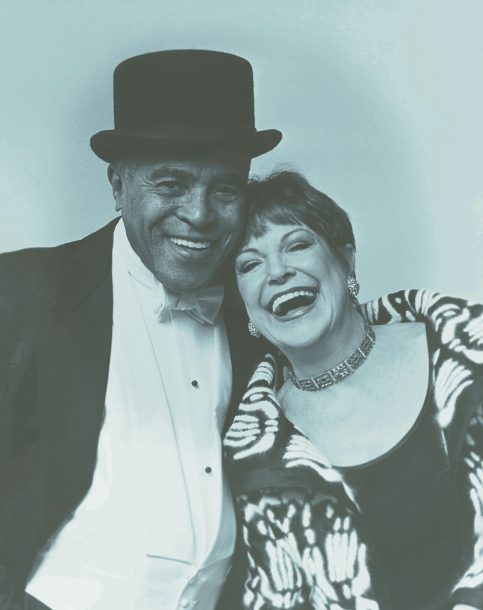 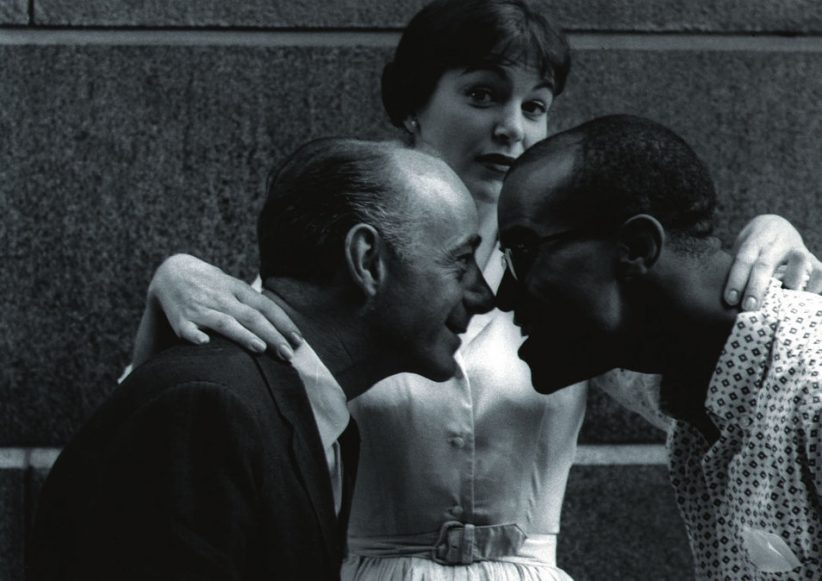 “He was always a good samaritan,” Jon Hendricks said of Dave Lambert. “If anyone was in trouble on the road, he’d always stop and help.”

That’s what Dave was doing on an October night in 1966. He was on his way back to New York from Cape Cod, where he had played a solo gig. On the Connecticut Turnpike, near Westport, he saw a motorist struggling by the side of the road with a flat tire. Dave stopped.

“It was the damnedest thing,” Jon said. “He was kneeling down, working on the lugs of the wheel. A big semi went by and sucked him in.” Dave was killed instantly. And that was the end, forever, of Lambert, Hendricks & Ross, on balance the most remarkable vocal group jazz has ever known.

Actually, Annie Ross had been out of the group since 1962, in which year she went home to her native England to wrestle with, and conquer, grave personal problems. She had been replaced by Yolande Bavan. And in 1964, Lambert had left the group, to be replaced by Don Chastain. But it was never the same. Dave Lambert, Jon Hendricks, and Annie Ross struck magical sparks, and anyone who never saw them in a club or on a stage such as that of the Monterey Jazz Festival has no idea how much excitement the three of them could generate, singing difficult ensemble passages or complex lyrics (by Annie and, even more, by Jon) set to famous jazz solos.

Memories, needless to say, attended the reunion early this year of Jon Hendricks and Annie Ross. “It’s the first time we’ve sung together in 36 years,” Jon said. “Well, we did once in that time, but this is a real reunion. The audiences are incredible. People who heard us in the old days are having tears of joy, and their children are jumping.”

Two generations have grown up since Lambert, Hendricks & Ross recorded their first album, Sing a Song of Basie, in 1957. Subsequent groups, including the Double Six of Paris, the Swingle Singers, and Manhattan Transfer, owed debts to LHR, and so does the vocal-jazz movement in the colleges and universities of America today.

The precedent for all scat singing, of course, is Louis Armstrong. In 1949, King Pleasure sang Eddie Jefferson’s lyrics for James Moody’s solo on “I’m in the Mood for Love” and recorded it. In 1953, he recorded “Parker’s Mood.” But the important pioneer of bop vocals was Dave Lambert, born in Boston June 19, 1917. With fellow Bostonian Buddy Stewart, he recorded “What’s This” with the Gene Krupa band in 1945, the first recorded example of a bebop vocal line. Then Annie Ross, born in Mitcham, England, on July 25, 1930, but raised in Los Angeles, made a considerable splash in 1952 when she recorded her lyrics to Wardell Gray’s “Twisted.” The third element in the equation, Jon Hendricks, was born in Newark, Ohio, on September 16, 1921. He studied literature and law in college in Toledo, but was encouraged by Charlie Parker to make music his profession, and moved to New York, where he became friends with Dave Lambert, who became his roommate.

“Our biggest problem in the morning was how we were going to get coffee,” Jon said. “If we could get through till evening, Dave knew the owner of a restaurant who would let us have dinner on credit.”

In 1955, Dave and Jon did a vocal recording of “Four Brothers,” which should be considered the germ of LHR. They began planning an album to be called Sing a Song of Basie, using a group of studio singers. Record producer Bob Bach heard Annie Ross. He invited Jon and Dave over to meet her. The two described their Basie project, and because of “Twisted” and other experiences, Annie understood them.

The studio group just couldn’t get the Basie feel, and Dave called on Annie to coach the group. “Frankly,” she said, “I was a little miffed that they didn’t ask me to do it.” They held a long rehearsal, but the group still couldn’t get it. Producer Creed Taylor was doing all he could to conceal his desperation, as is his wont. Finally, according to Annie, “Dave said, ‘Let’s keep Annie, and we’ll overdub the parts.’ We did it, and it was incredible.” They built up the full orchestrations in overdubbed layers.

The LP was a hit, and soon they were in enormous demand. Further albums followed: The Swingers (1959), The Hottest New Group in Jazz (1959), Lambert, Hendricks, and Ross Sing Ellington (1960), and High Flying (1961). In The New Grove Dictionary of Jazz, Philip Greene wrote, “At its best, the group offered witty, effective arrangements which were performed with great exuberance and swing; this helped compensate for the occasionally inaccurate intonation of the singers.”

That’s true enough, as far as it goes. In the first place, the tempered scale on which “intonation” is judged is inherently false, a compromise based on the keyboard that has been with us since Bach’s time. It is not true pitch.

More to the point, any orchestration text delineates what is implicit and natural to any given instrument and what is difficult and/or awkward for that instrument. And the human voice has its own limitations. The material LHR adapted and tackled comprised complex, humorous, often scintillating lyrics by Hendricks and Ross, set to “existing” ensemble and solo “instrumental” passages, and was implicitly anti-vocal. The tensions of bebop chromaticism and odd intervallic leaps create almost insuperable problems for a singer. (The raised fifth in the opening passage of Michel Legrand’s “What Are You Doing for the Rest of Your Life?” presents an intonation problem for many singers. And many Brazilian singers were nonplussed by the chromaticism of Jobim’s tunes when they were first heard.)

What LHR did was difficult to the verge of impossibility. Indeed, the only thing that proved it possible at all is that they actually did it. And watching them—even more than just listening to them on records—gave one some of the pleasure of watching great gymnasts. The more one knew about singing, the more amazing it was. Only the work of the Singers Unlimited offered a comparable conquest of vocal difficulties, and this was in a completely different area.

In addition to the planned passages, Lambert, Hendricks, and Ross were excellent improvisational singers. Jon’s scat passages were quite astounding. After the trio broke up, Jon continued to work in various ensembles and as a soloist. His recording of the Italian song “Estate” reveals that he is an exceptional and sensitive ballad singer. Privately, Jon always had scathing things to say about critics, which makes one of the side trips of his career all the more peculiar; for a time he was a jazz critic for the San Francisco Chronicle. Sometimes he performed with his wife Judith, and his daughter Michelle and his son Eric.

In England, Annie too pursued a solo career. She sang in clubs and for a time had her own nightclub (Annie’s Club, in 1964 and ’65) and her own television show. She had acting roles in films and, in 1976, her own stage show, An Evening with Annie Ross. She was happily married to actor Sean Lynch. “What a lovely guy he was,” Jon said. Ironically, Sean, like Dave Lambert—and, incidentally, like Buddy Stewart—died in an automobile accident. In 1985, Annie returned to the United States. She and Jon both live now in New York City.

It was inevitable that the two would think of reviving the repertoire they had so long ago developed and explored with Dave Lambert. “It wasn’t really that hard,” Annie said, “although at the very beginning, I thought, ‘Oh my God!’ Then it became a matter of, ‘Which of Dave’s lines do I sing; which ones does Jon sing?’ But then, after we got over the nervousness, the energy and the excitement were still there. It works, and it swings, and my voice is getting stronger. It’s back to that hard swing. It’s a workout, but it’s worth it. Oh, it feels incredible!”

The two are touring now. An appearance at the Blue Note in New York was followed by one in Symphony Hall in Chicago, then by one in the Jazz Bakery in Los Angeles.

At one point during the Blue Note engagement, I was talking to Jon on the telephone. “Are you going to be home over the weekend?” I said.

“No!” he said. “Exhausted! This takes concentration!”

“Do you think of Dave a lot?” I said, knowing the answer before I asked.

“Every day of my life,” Jon said. “And especially every night when we’re singing.” Originally Published May 1, 1999

When Enrico Rava recorded The Song Is You (ECM), his new album of duets with pianist Fred Hersch, in Lugano, Switzerland, he was just out … END_OF_DOCUMENT_TOKEN_TO_BE_REPLACED

The title of trombonist/composer Kalia Vandever’s second release, Regrowth (New Amsterdam), follows logically from the botanical metaphor of her 2019 debut, In Bloom. The new … END_OF_DOCUMENT_TOKEN_TO_BE_REPLACED

If we’re going out on a limb and calling the music that trombonist, vocalist, and songwriter Natalie Cressman makes—as soloist, as side-and-session person, in a duet … END_OF_DOCUMENT_TOKEN_TO_BE_REPLACED

When Jennifer Hartswick checked into a temporarily shuttered bed and breakfast in the winter of 2021, relaxing and writing were both on the agenda. Spending … END_OF_DOCUMENT_TOKEN_TO_BE_REPLACED